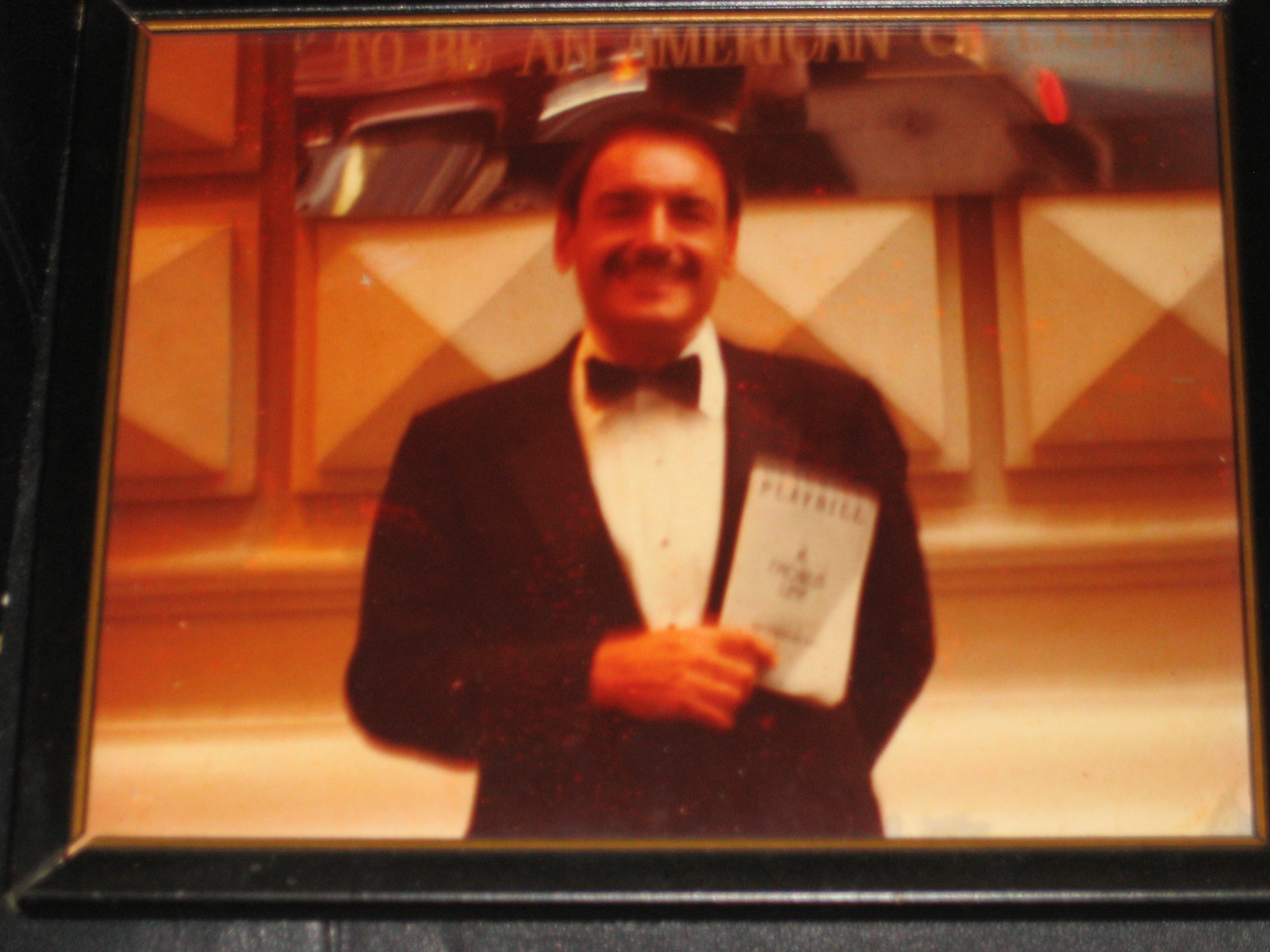 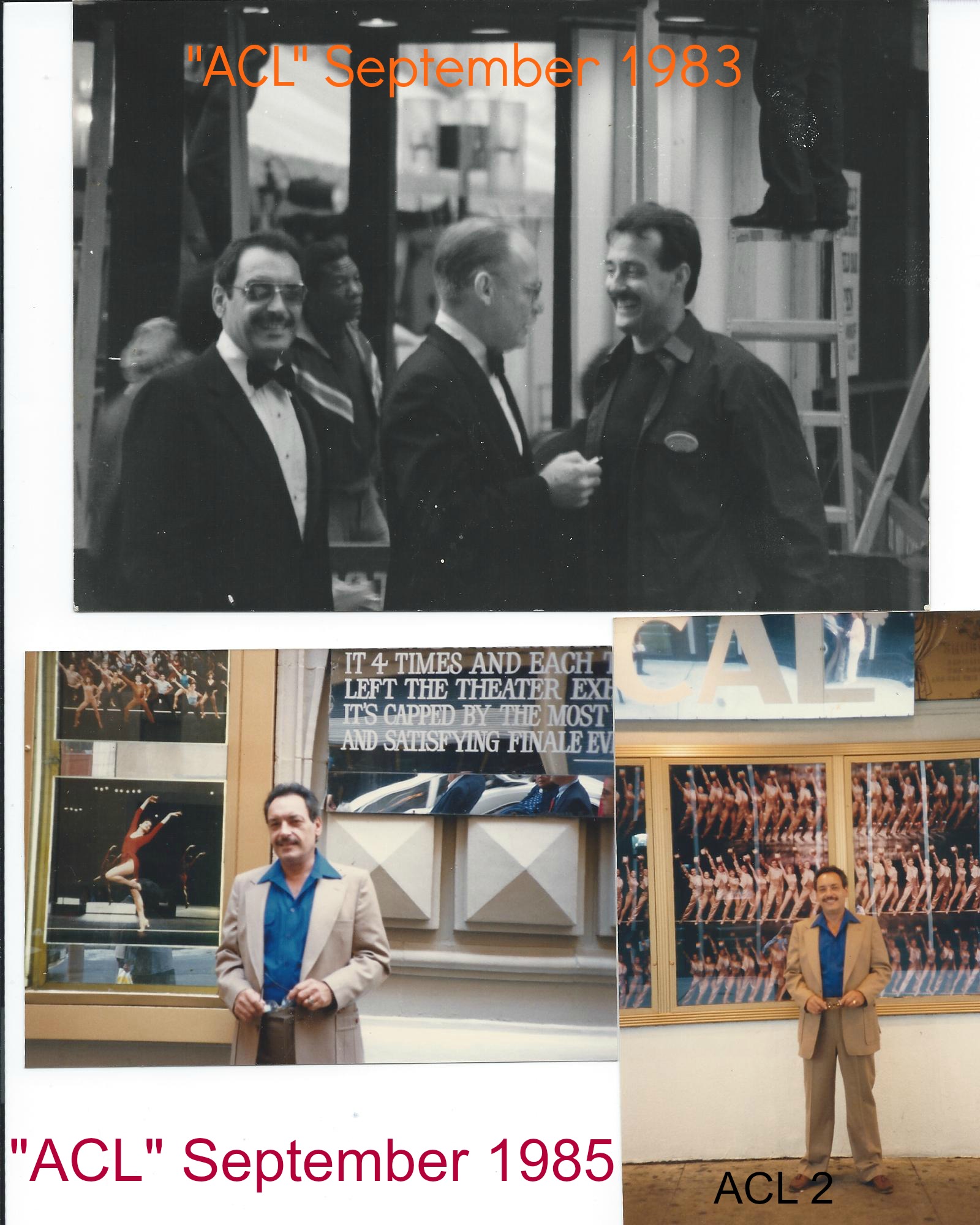 ME, ROBERT AND BUDDY WHO PLAYED ZACH IN "ACL"

ON THE BOTTOM ME IN FRONT OF THE THEATRE

(Do not even mention the movie version to me--one of the worse from stage to film ever made!)

Since September 29, 1983, when, thanks to Buddy Vest who played Zack on tour and was to appear in this unbelievable production, I saw the ‘longest running show on Broadway’. A stellar event I have never seen any show the equal of this one. When the producer, Joe Papp, came out to ask if we would mind sitting through the finale again so it could be filmed for TV the audience exploded. When I left the theatre I couldn’t talk from yelling so much and my hands were huge and red from the never ending applause.

In 1976 I watched the Tony Awards, watched the ACL's excerpt and, with that downbeat and the dancing starting immediately, knew I HAD TO SEE IT! For the first time in my life I yelled “Bravo!” at the TV screen. I turned to Johnny, my partner at the time, and told him I was going to call for tickets the next day and that we were going to New York Thanksgiving weekend.

I was sitting in the 3rd row of the mezzanine at the Shubert theatre in New York city! From the moment the houselights went down until 2 hours and 10 minutes when they came up again I was mesmerized. I literally, couldn't get out of my seat to leave the theatre because I was so drained. I had just seen the perfect blend of music, lyrics, dancing, singing, acting, lighting, etc., of any Broadway musical since I started going to theatre in the 1940s. I laughed, cried, to this day I don't believe I breathed during Cassie's 8 minute solo on the stage but then I don't remember breathing during Paul's monologue just before that.

Being in New York for the weekend I went back to see it two more times and after that became a "ACL groupie--saw the touring companies in Miami, Ft. Lauderdale, Atlanta, Memphis, St. Louis, Dallas, etc. I have seen EVERY production (professional, regional, amateur, etc.) that has been presented in South Florida the past 26 years. I've been back to NYC to see it 21 times (Including the performance when it became the longest running show on Broadway--THE most exciting time I EVER spent in a theatre.)

Why did this show have such an effect on me? The fact of its universal theme of applying for a job and putting yourself on the line for it? Being able to identify with the cast, except maybe for Don? Sheila's caustic blonde afraid of getting too old for the job and start facing reality? Mike whose 'grandma hung out the window '? Mark, the 'new kid on the block'? Diana who couldn't wait to get out of the Bronx? Zach, the director who is so caught up in his profession his personal life is non-existent? Val who felt her looks were holding her back? Kristine who can't sing? Greg? Bobby? One gay, the other who feels committing suicide in Buffalo would be redundant? I defy you not to cry, or get a catch in your throat, when Paul talks about the first time his father called him his son! Identifying the most with Cassie who wants to do what she does best knowing she can prove herself if given the job? I had been there, done that! The emotions you go through when the line is picked--who got the job, who didn't? And the finale, showing the chorus line as it should be, perfection.

When I saw it the 100th time it was as if I was seeing it the first time--once again I went through all the emotions--never seemed stale. I've seen bad productions, directors cutting roles, singers and dancers not up to par, etc.,--but it doesn't matter--it's the book, the music, knowing each actor/dancer/singer is putting themselves 'on the line' each performance. 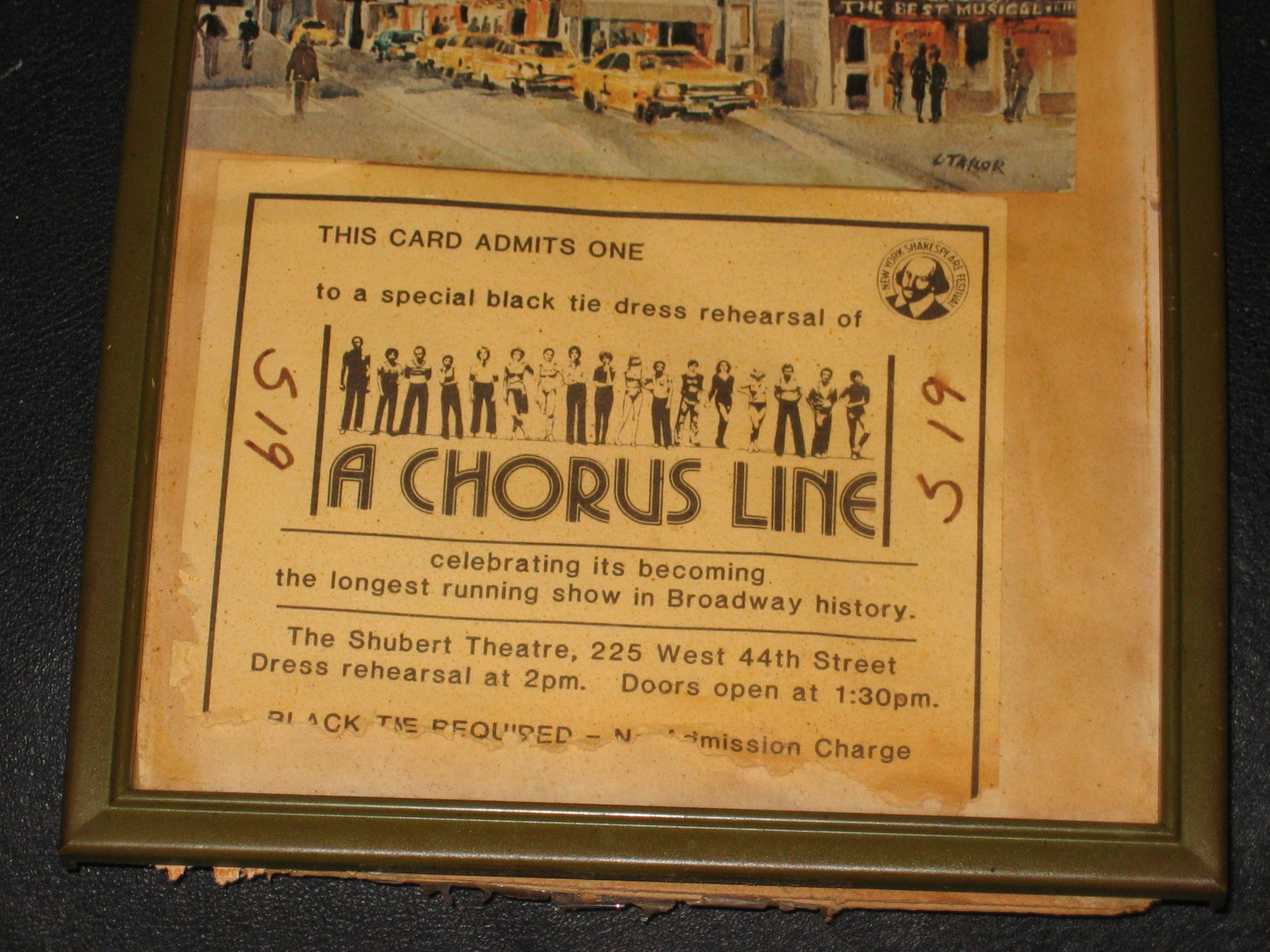 MY TICKET TO THE GALA SHOWING

IT IS AS CLOSE TO A CONVERTIBLE AS I WILL GET! LOL

DO YOU KNOW DONNA McKECHNIE? YOU SHOULD!

I have not been to the theater but it's on my bucket list.

Wow! Well I have never heard of this production and I have never ever been to see a live show but your review has made me want to go and see this, just not in America!

I don't know what I would do if theatre---and movies--were taken away from me! I have been goping to the theatre since the 1940s!

Why not in America where they put on the best musicals on Broadway???

America is a long way away and I have heard many awful tales of the queues to get in at the entrance hall, with very rude staff. I couldn't be bothered putting myself through that. It's not worth it.

I looked at your profile to see what country you are from after your America commnet--doesn't say--also it is impossible for me to believe that you never heard of "A Chorus Line"---it has played all over the world to gear success and even local schools in all countries do performances of it--I'm just curious--especially about the 'just not in America' comment--what's wrong with America? :O).

Sorry but that is like saying all New Yorkers are rude--sure some are but very few--it nis the same goign to the theatre--dont' tell me you don't have any rude people working in wherever you live!!

Now, I LOVE the film and it is a musical I would LOVE to see on the stage. My female in-laws are big musical theatre fans and we had planned to go last year but one way and another it never happened. Big shame that, because I still need to see it on the stage. Perhaps not with my in-laws, though...

OMG!!!! Wait til you see the show on stage and you will understand why the movie is such a horror!!!
There was a documentary up for an Oscar last year that I have called "Every Little Step" which followed the auditons for the 2006 revival--it is what the movie should have been!
Another suggsetion---go to youtube and watch "The Music And The Mirror" which was changed in the movie to a foolish song--Donna McKechnie (who i will be writing about in the future) won a Tony for her performance in that show mainly for that number!!!

It would be difficult not to want to see a live version of "A Chorus Line" after reading of your pure joy in your experiences in seeing it so many times.

I have been going to the theatre since 1944 when I saw the original production of "Oklahoma" and I saw all the great ones but "A Chorus Line" is just perfection! If you can get the DVD of "Every Little Step" which will give you a good idea of the show.