Keeping A Memento To Remind Me 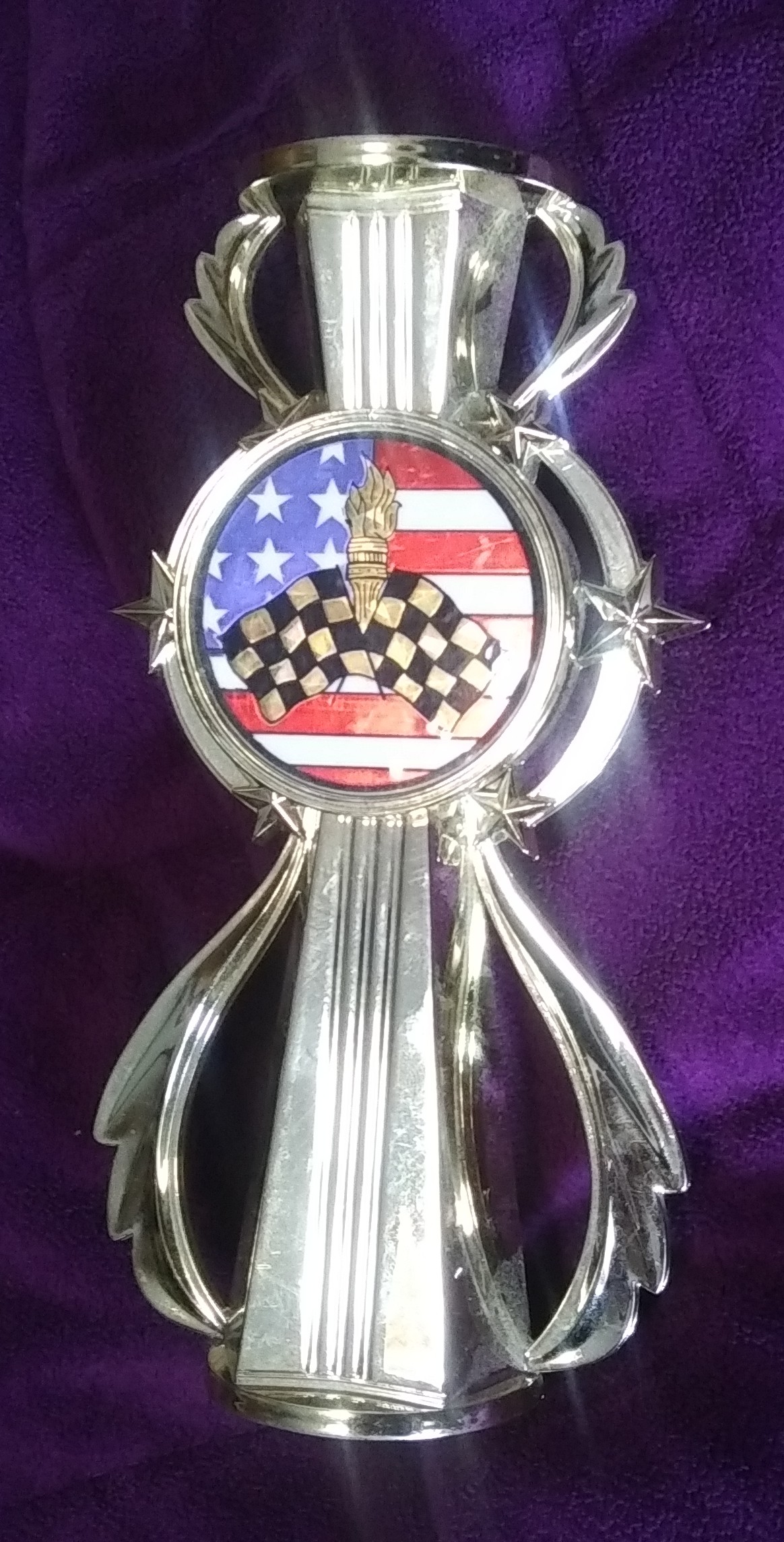 I have a piece of one of the trophies that we handed out at the race track. I never planned to be there, but I gave four years of my life in service to it. I was making the beat of a difficult personal situation.

When I lost my home, I was running out of options. I strongly suspect that I would have been able to stay in California if I could have held out a little bit longer under the pressure I was under, but I took what I thought was the safe bet.

Oregon may not be where I wanted to live, but there was supposedly the possibility of a 10 year run with the gig I was taking. Basically, I would be living under the roof of a racing promoter.

My role would be handling his media affairs, which included writing articles, doing social media, handling the web page and doing the souvenir programs. I had a game plan for that and ideas on how to help the track.

Naturally, when I came up here, my duties were twice as much. I pretty much took on the unofficial role of assistant promoter. If you asked a few people around the place, they might have even say I was the promoter. That's a flattering thought, albeit inaccurate.

One of the things I did was serve as at times was a buffer zone between him and the racers. It took a while for anybody to warm up to him, and I would help smooth things over.

Even he admitted that we wouldn't have achieved the success we did if I had not come up and taken this job. I performed many duties that helped keep the show going, but it would take too long to explain that all here.

What I've never told him was that if I'd have understood the whole situation, I wouldn't have taken the job. It's hard enough with the challenges that this particular racing community presented.

That's not a knock on the people, because there are some good people there. I did my best to learn the history before coming up here and even proposed some ideas that were used effectively at the track.

There were some things there that we were sometimes blamed for, and it made it our job that much more difficult. The real problem was it became evident early on that he wasn't ready to promote this venue.

He didn't have the budget for it, and he didn't particularly like the community we were serving. I'm just going to leave it at that, although I am writing a book that will include things on this very subject.

I realized during the first year that there was no real 10 year plan here, and he was probably going to bail at the earliest opportunity. I tried a few times to work out a deal to get back to California, but something always held it up.

Therefore, I made the best of our four year run, knowing that it didn't matter that much. He was going to get out of there at his earliest opportunity. It just so happened that nobody wanted to deal with him.

They didn't want to spend what he thought the contract and his equipment was worth. Every negotiation led to a dead end, and he had begun negotiating with people late in our second year.

Covid-19 was his opportunity to put a key in the gate and walk away. Obviously, businesses like race tracks were mostly unable to open with any fan attendance at all last year. Some states were better than others, but Oregon was a no-go.

We did have one track definitely raising a middle finger to the governor and getting away with it all year, but he wasn't going to risk it. First of all, he had no plan to stick around, so why I do it for the good of the community?

Secondly, he almost certainly would have lost money, and there was no reason for him to do that. When I watched him watching the news and listening to the reports on the shutdown, I almost sensed relief on his behalf.

He let the community know that he couldn't open the place up without lifting restrictions. When he realized they weren't going to do that, he knew he wasn't opening it up again. This was his way to get out and blame it on factors beyond his control.

When this year started out looking like it wouldn't be much better than last year, he quietly took everything that belonged to him out of the facility and let the people know that he was terminating his contract.

I helped him move everything as I'm still living under his roof and I didn't want to see him kill himself doing it all by himself. He's stubborn enough that he would have done it by himself, and he's really in no condition for that.

What I had in mind once I knew we were going to leave was that he could sell the track to somebody who would maintain some of the policies we started that were successful. They could continue the growth in the program that we had started and we would be remembered in a positive light.

However, what ended up happening was something far different than that. Much like his previous track, it didn't end on the high note that he might have hoped. The community raised a panic.

Somebody jumped the fence and took pictures. They posted them out of context to state the track was abandoned and all of that stuff. The reality was the business couldn't be maintained in 2020, and therefore, not much was done to the facility other than some landscape grooming.

They took the pictures in the middle of winter, when everything is overgrown and we generally weren't doing any maintenance. That stuff happens in early spring. What ended up happening was the community ran around claiming that the sky was falling.

The next thing you know, the media got a hold of it. There were things being said about him that were completely untrue by people who knew they were lying. The facility had been in decay since long before we got there. That much is true.

However, the racing program we left them with was much better than the one we got when we came to the gates. In any case, I put my heart into this track in the time I was there. I hated to walk away the way we did, and it hurts even more to know that we are not looked upon favorably.

I think most of the people know that I gave it my best effort, so that's of a little bit of solace. I think that in time, they are going to realize that running this track isn't as easy as they thought.

At least I can say I was there and I did some things that helped the place. I gave it my all. Plus, we gave people some happy memories to look back on.

King Of The Pool

Goodbye Mr Biggs, You Will Be Missed

That's a sad story. Let us know when the book is out.