Can a Mouse Pad Make You Sick? 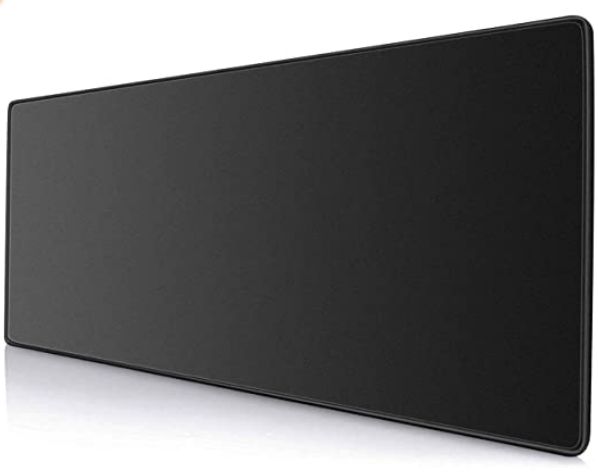 Some months back, I began developing a pesky skin condition. It was relieved by my doctor, briefly, by use of prednisone. But it returned with a vengeance. It covered my arms and began to invade my back, even my legs. I itched to pieces, sometimes scratching to the point of bleeding. Whatever I tried did not last any time. Then one day, I had a thought.

My son had bought an oversize black mouse pad about that time, that was 2/3 the width of my desk. It worked well!

But I now wondered: could that be the source of the rash? So I searched for "large mouse pad rash". What I came up with was a mouse pad review of what looks like the mouse pad my son bought me. I read that, while it worked very well as a mouse pad, the user should wash it first . Some were complaining it broke their skin into a rash.

The review said he had, in fact, broken out some himself. So he took the pad, incorporated it among some dark clothes, and machine-washed the pad. After that, he had no problem.

Does this strike you as proper? At least it should not be sold until after the manufacturer cleanses it. Almost surely, this product came from overseas. Now there would be no problem in that, but many countries provide goods not produced with the rigorous health standards enforced in the U.S. So my recommendation is: learn a lesson from what I experienced. Be careful what you buy, and consider a pre-clean (if possible) before use.

The CORRECT Way to Make a One-Eye Sandwich

My goodness, there must have been some chemical on that. And there should have been a warning to wash before first use. Have you tried washing it now?

Not yet. My wife and son got me a new, small, vinyl covered mouse pad. Likely the bottom rubber surface, if I turned it upside-down, would also cause the rash. I don't begin to pretend to think it is trouble-free. The big one may or may not be washed. My wife is funny about things like that. She's likely to let it "disappear".

I can understand her not wanting to put it in the washing machine, in case it disintegrates and clogs up the machine, however, it could maybe be soaked in washing powder in a bucket? At least if it disintegrates, it can just be thrown out and if not, you may be able to regain use of a useful product?

I am reluctant to use masks I received for protection against covid-19. They came from China and they took 2 months to arrive via Amazon Prime. They say these are washable, so I will wash them first. They came individually wrapped in plastic, sealed, with no English writing on them but in fact, Chinese. I bought a pair of protective gloves from Target and read the warning label that indicated, from California, that they could cause cancer or cause sterility in males. Wonder why they even sell those gloves! I think I would be better off using 3M dust masks from The Home Depot and gloves from the same, for basic gardening use. I know for a fact that my wife got skin rashes from wearing latex gloves, recommended by a friend who obtained a few of them to give to us for personal protection while out and about shopping, from a hospital supplier. Well, he told me if you have a tendency to become allergic to latex you should consider buying nitrile gloves instead.

You're worried about the gloves might cause you to become sterile? At our age, I wouldn't lose sleep over that one, Anthony. There are some conspiratory theorists who might think such masks, coming from China, were designed to *cause* Americans to have Covid-`19. At one time, I would have thought a person was crazy to wash something brand new. Not now!

Not all that glitters is gold my friend