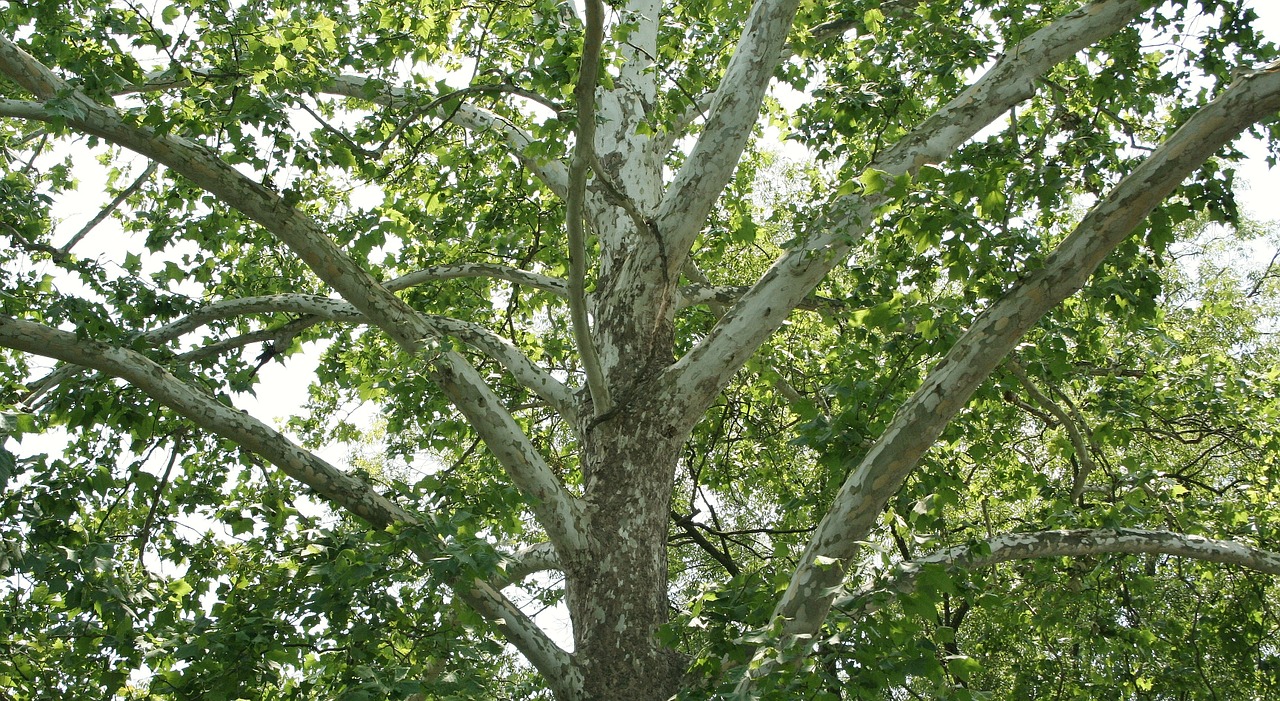 Trees like to have an incredible amount of root space.

The Sycamore trees in the front yard of our home in Dallas were both planted about a week apart, and grew about the same height but one day, about 9 years ago, lightening struck one of the trees, and about 6 years later, a truck hit it. The other tree lost many limbs due to high winds in the springtime.Those trees were planted about 50 years ago. They stood over 50 feet tall.

What is interesting to think about is the age and the depth of their root system. We live in a city that has lots of limestone below the top soil layer and it greatly restricts root growth of large trees. Oak cliff is noted for it's very large Oak trees. Sings of root restriction are when the cement layers of the driveway raise up and become uneven and begin to crack. Moreover, the roots themselves start to rise up above the surface of the grass and grow outward into the yard until they appear to cover large expanses of the lawn. We were forced to have one Sycamore tree cut down completely.

It was not fortunate for the squirrels that had a nest inside the hollow of the center limb that was dead for a year and had been broken off the previous year in a severe thunderstorm. The result of high straight winds were evident one early morning about 3 months ago, when after a storm of mild intensity, I went outside to witness the fallen limb from the center of that tree and realized that a mother squirrel was dealing with it's baby squirrel within the nest that had fallen out of the hollow limb was a sad sight to see. But, as the hour passed, I realized the squirrel had been removed from the nest on the ground by it's mother and taken to somewhere safe. I believe that the baby squirrel did in fact survive. The mother squirrel now seems to be living in the next door neighbor's Hack berry tree. The Hack berry is very common in this part of the city.

The men from the tree service sized up the situation and gave us an estimate of about 150 dollars to completely cut down the tree and place all of the branches and limbs and sawed up trunk along the street's edge for city bulk trash pickup within the next few days. I now had to deal with the fact that we no longer had a tree there, to act as a barrier against unwanted traffic running off the street and into our property and possibly with our house. Just a year ago or more, I can't actually recall the exact time it happened, but a drunken driver drove into our yard across at a high rate of speed, hit that tree and then collided with our house.

The other Sycamore tree is not doing as well as it should be, due to high temperatures and drought in the past several summers and severe winds due to infrequent storms at different parts of the year. The fact that the surviving tree is no longer competing for root space, across the sub surface of the front lawn, it would seem that it might somewhat benefit from having additional space to grow more roots but maybe not. Like I said earlier in this article, the soil is not deep and just below the top soil, which is mainly black gumbo, there is a layer of sedimentary rock or shale, that is very common in this geographic area. Thus, the Barnett Shale, which takes up lots of space within this region of the city of Dallas and in areas West, frack drilling for natural gas has taken place over the past few decades as far as I know.

As you go North towards Highland Park, the top soil is deeper before reaching the shale layers. I hope the other tree manages to live for many years and I will have a tree professional come give me an estimate for the cost of having the trunk of the downed tree ground so that I might be able to plant yet another tree in it's place.

Read more about the Texas Sycamore tree from the article in this LINK TO LOOK AT IT .

We had sycamores in NJ when I was young. They love water. I enjoy hackberry trees. They are one of the trees that get black knot. Here is black knot... https://www.quirkyscience.com/black-knot-tree-fungus/

That article was awesome. I appreciate you sharing it with me. I want to share your article with my friends on eye for nature.
https://www.facebook.com/groups/464087864354429/

I am glad to hear the squirrel likely survived. Large trees can be a problem. Our sons planted conker trees (horse chestnut - Aesculus hippocastanum) in the garden when they were boys and one came down in high winds last year. Luckily no one was hurt and nothing damaged and with the help of friends we sawed it up and the logs were left to dry and are now being used for heat. So the tree one son planted years ago, eventually became a heat source for him maybe 30 years later.

Shades of "The Giving Tree"... I've never read the book, but apparently it is in schools in the US.

Yes, I have heard of that book. It's very sad but a good illustration of how humans treat nature.

Reading your first paragraph pained my heart. I love staying under the tree specifically if already the age of that tree is already around a decade and a century. But with what happened to trees that you have that struck from lightning, break my heart.