The Tiny Terror Returns With Her Big Cousin 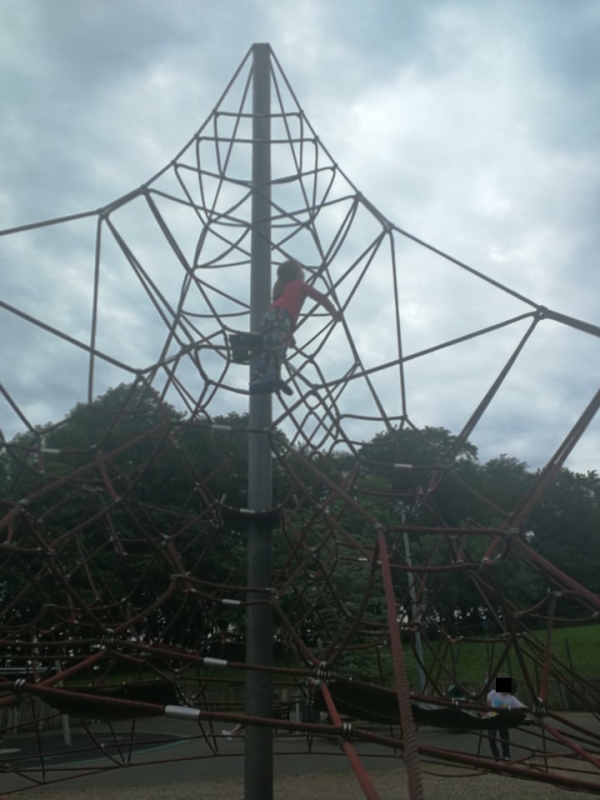 Not For A While

I haven't written about the tiny terror for a while because as she has grown, so she has become easier to handle, though she still expects to be able to run home from school. It's understandable, because she is such an active child, that sitting still in school for 5 hours a day, even if there are playtimes and lunch break, is very hard for her, so she is rather like a wound spring when she is released at the end of the day. Running home is one way she has of letting off steam and it certainly gives me a bit of exercise, when I pick her up.

The last school day for this year, here, was 30 June and she is now on holiday in a campervan with her parents and siblings. Her parents don't travel long distances each day, so the children get a chance to run around in parks or countryside several times each day. Yesterday, they were in a park with a high climbing frame. She managed to get almost to the top but then couldn't get back down. Her mother, who does not like heights, had to pretend she didn't mind them and climb up to bring her down!

Now, you would think that as children get older, they get more sense? The Tiny Terror's big cousin was in trouble the other day. She is now 13, a teenager and was left in her nanny's house by herself while her nanny went shopping, because she does not like going round the shops. She invited some friends in and they decide to make marshmallows and apparently left the kitchen a sticky mess. Once the marshmallows were finished (and eaten) they decided to play a more active game. The house had high hedges around it. They went up to the bedroom, climbed out of the window and jumped into the hedge! Apparently, if you jump in starfish fashion (i.e. spreadeagled) you land flat on top of the hedge, spreading your weight. She jumped feet first and went down through the hedge! The neighbours had to help her out, and she had two large scratches on her leg and abdomen. She has now been banned from staying in her nanny's house by herself. The only saving grace was that she came third in the exams for her year in school, so she has been forgiven, somewhat!

Image Credit » (c) MegL, I have the right to publish this photo

Guest Post: Poverty: What It Is and What We’re Doing To End It

Ah. Reminds me of one most unusual activity I joined in as a young fellow. Hard to believe it, now... A chum named Dick Hess had one or two friends over besides myself. They had a really tall evergreen tree in the front yard. We all climbed up the tree, a really considerable height, and then slid down the side of the tree to the ground! It was such fun, really, though how we didn't get killed, I'll never know. We did it again and again.

Yes, there were some things I did as a child that I wouldn't consider now, including jumping off the top diving board in a swimming pool when I couldn't swim. I loved the water and could make my way around in it. I was staying at my grandmother's at the time and the swimming pool staff knew my uncle. He promptly started me on swimming lessons.

You're much bolder than I was!