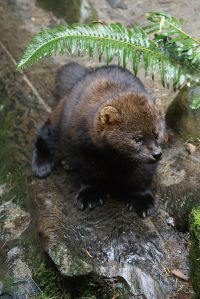 When I was 33, I moved from South Jersey to Virginia. A year later, I married. We moved to Nelson County, Virginia, and in the 1990s, we moved to the eastern side of the county. Like other families, we had laundry to wash. Some of it was large enough and of quantity enough to take it to the local laundromat.

There was a little creek that ran to the side and slightly behind the laundromat. I took a peek at it and noticed a little dark animal moving about toward the bank of the creek. It seemed like it could have been a cat. However, when I stared at it, it looked like some sort of very dark brown to black weasel! This was new to me.

Now I had a book I obtained many years ago put out by the Virginia government agency on wildlife. When I got home I combed through it. I found out what the critter was. I had never heard of it before, but unquestionably it was a fisher! Pekania pennanti is its assigned Latin name.

Here is a video about the fisher that well-illustrates both its appearance and its unforgettably eerie cry!

Now the fisher is elusive, even where it is somewhat plentiful in the northern US and Canada. What an amazing find for me (the other day I was informed I should have reported it, it is that rare) here in Virginia.

Have YOU seen an unusual creature? Tell us what it was in the comments section, below.

Wikipedia says it is native to North America, so it is sad to see comments below the video suggesting they should all be exterminated!

Animals that seem undesirable to people receive a quick response, "Kill, Kill!" But people are (to be honest, by and large) shortsighted. Such animals control other undesirable animals. In fact, the term ecosystems misleads. There is truly only one ecosystem. See this video and that fact becomes clear: https://www.youtube.com/watch?v=ysa5OBhXz-Q&t =7s

I put out water for the local wild birds a few months ago. These past few days I looked out back and there were two huge grackles. They are like crows but huge. I mean, they have a wing span of at least 2 feet and they are as big as ducks. They seem to like it in our back yard, but I put out a red flag on a pole and that doesn't do any good to make them go away, so I figure, as long as I put out the water, they will continue to hang out, but I only think they are unusual due to their large size. I have seen times when I put out pop corn or slices of tortillas on the grass and I saw an entire flock. Almost 50 birds in the yard. I am glad I do not see this kind of thing every day. It would be terrifying. Did see two cats at Kroger's parking lot, as a courtesy clerk pointed out to me that they were emerging out into the lot from the drainage sewer and those cats were quite large. I figure they are lucky not to have emerged during a heavy rain. I will check out your link about the Fisher. I think that will be interesting to read.