Today was a good day for mowing the lawn, including the next door neighbor's lawn 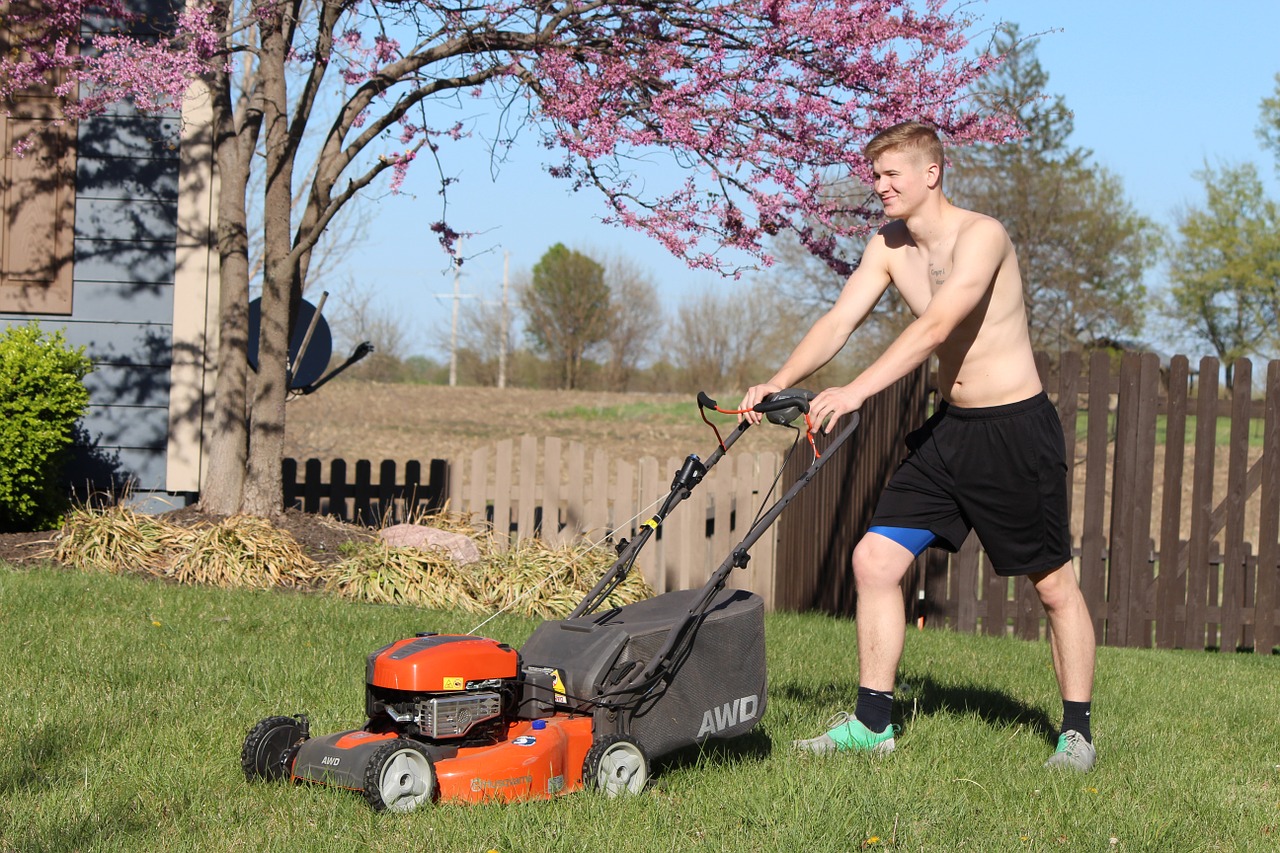 I looked out the window yesterday and our next door neighbor was struggling with his lawn mower. He is living alone and is an elderly man. I usually cut his lawn when I cut our lawn but since it has been a few weeks since I cut our lawn, our neighbor's back yard was like a jungle.

I saw that the poor guy ran out of steam. He had managed to cut about half of his back yard and he went inside his house, leaving his mower setting there in a half mowed lawn.

I was kind of concerned. I know two men who died after mowing their lawns. In 1971, our next door neighbor, to my parent's house, where I lived earlier in my life, had mowed his front and back yard and it was a hot Texas summer afternoon. The temperature was well in the upper 90s. He was already retired. My older brother said that he went over to talk to our next door neighbor only to find him sitting in the living room, watching television and he apparently had a heart attack or died from heat stroke, just moments after he had finished mowing his grass.

We really loved those neighbors. They were so nice and kind to us and his son gave me a stereo that I enjoyed playing records on and when I was a kid, Mr. Foster, was his name, would throw a ball over the fence to me and he always dressed well, in a suit and kept his lawn looking good. He was a good man and I miss him. Back then in the 1960s, neighbors knew each other and the Fosters were no exception.

Many years later, a man who lived down the block from us, when I was married to my wife and living independently, had a stroke, after mowing his lawn, also on a hot Texas summer afternoon. So, here it is 2019, in the month of March and the local weather can get up in the upper 70s by day and down to as low as the mid 40s at night. Today was a perfect day for me to mow the lawn. I got out the mower from the metal shed, filled it up with regular unleaded gasoline and primed it by pushing the primer ball a few times, and it cranked up like new. I mowed the alley, our back yard, front yard, our next door neighbor's front yard but I wanted to finish doing his back yard but his gate was locked.

I finished up with my other neighbor's front lawn and put the mower back in the metal shed. I got back inside the house, got washed up and laid down on the living room sofa and had a glass of iced tea. This time no sugar in my tea. After about an hour and a half, while Windows 10 was doing an update for October on my desktop PC, I had to find something useful to do and I looked outside at our neighbor and saw that Mr. Pena had his front gate open. I knew that he wanted me to finish his back yard. He had already put his mower back inside his garage, so I knew he was expecting me to finish his yard.

I told my wife I was going back out while the outside temperature was well under 60 degrees and cool enough to mow so I went into Mr. Pena's yard and began to cut that grass and it was real high. I mean, almost two feet high. Full of blue bonnets and Johnson grass and all those mosquitoes flying all around the air and even some moths. It was pretty thick and I was lucky that I got it cut withing about 2 hours. I had to mow it twice to mulch the thick clippings.

Mr. Pena walked out to the back and saw me there, cutting his lawn and he put a bag of something on the ground, next to his trash can, not inside the can and I had no idea what it was but he went back in the house as I continued to cut the lawn.

My wife was unhappy because lunch was already made and was getting cold. I had lost track of time. I had spent a good 2 hours cutting his back yard. Glad I got finished. I got cleaned up and my wife had prepared sweet potatoes with butter, salmon and cornbread. We ate lunch as we watched a replay of The View, a talk show with Whoopi Goldberg and a few other prominent ladies, including the daughter of the late John McCain, who talk early in the morning about politics and other things.

It was a good day to mow the lawn and basically I really had more energy than I thought I would have to have mowed 3 lawns within a 3 hour period. So, later I managed to get Windows 10 updated with the October update. I was lucky and got to watch 2 television science fiction shows on YouTube premium for free as I don't yet subscribe to YouTube premium or YouTube Red. The show was called Origin. It was a pretty interesting story but after the second episode I was prompted to subscribe to YouTube Premium for free at first but pay thereafter. I figure if I want to see that series I would have to subscribe. As of the moment I don't know what space alien has invaded the ship so I guess I might never know.

Hope your day was a good one. Enjoy the pleasant weather this month because eventually the temperature will get much warmer over the next few months. I do not look forward to summer. But I do live in Texas and it always gets hot. As to mowing the lawn in hot weather, I do not recommend it. Find a time when it is cool, if before dawn or after sunset, when you can get the mowing done when the sun is not radiating directly on your head like it gets in Summertime in Texas. You can get heat stroke in Dallas if you get out and try to do anything out doors, be it mowing the grass, playing tennis or jogging.

The only time I really do enjoy mowing is in spring. When the temperature outside is in the 60s or lower, I feel invigorated.

Putting On Airs - A brief story - by A.P. Davis

That is good of you to mow their lawns and a lot of work for you - 3 lawns at one time!

A friend of mine apparently ignored the weatherman's heat advisory NOT to mow the lawn. In fact, he had a push mower! And, naturally, he had a stroke. They found him outside on the ground. He is in wheelchair, partially paralyzed. He does not communicate well. And he missed out on being the best man at his daughter's wedding, which was to happen very soon. I know another man who shoveled snow. He first asked his sons, who wouldn't do it. Afterward, he came inside and showered, dying in the shower.