Wish You Had Never Started 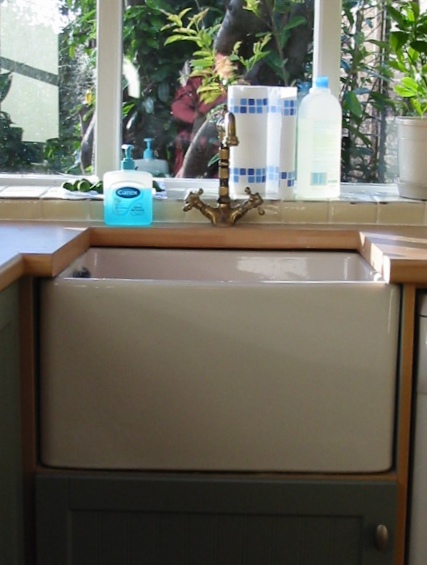 Did You Ever Wish That?

That you had never started something? While I didn't start it, I certainly wish my husband hadn't noticed the tiny leak in the kitchen sink mixer tap. It didn't bother me but it certainly bothered him, even though he is supposed to be taking things easy. You can read about what happened there here . I stopped the story half way through because that was how it was left that evening - the plumber was supposed to arrive on Monday and fit the taps we had bought on Sunday.

He had been told that we had a Belfast Sink. For anyone that doesn't know what this is - it is a large china / porcelain sink that you could bath a small child in. They are very useful in the kitchen and are becoming more fashionable again, after being seen as "old-fashioned" for a while. The sink was surround by a custom-made wooden frame that included two draining boards and a frame for the Belfast sink to sit on. The taps were set into the wooden frame at the back of the sink. In order to change the taps, the sink would have to be slid forward off its frame and lifted out, so the taps could be accessed from underneath. Sounds simple enough? Unfortunately, the person who installed the sink, some 18 years ago, used mastic to keep the sink on the frame. There is no need for that, as the weight of the sink keeps it steady and it does not need stuck down. The mastic was old and hard and the plumber told my husband that there was no way it could be slid out and no way to remove the mastic and the sink would have to be broken to take it out and of course, a new sink put in.

The plumber had another job to go to. I couldn't blame him, he had thought the job would be simple and it turned out to be complex. The plumber said he would come back at 4pm on Tuesday to fit the taps, in the expectation of a new sink being there to slide into place. But when my husband hears the phrase "can't be done", he determines that he will do it. Despite his illness, he worked like a Trojan, used a file, a knife and finally a paint scraper and hammer and got the sink separated from the mastic. He and I lifted the sink out and placed it, in one piece on the floor.

Of course, at this point, we had no water for the kitchen sink and no way of discarding water either. The only way to wash dishes was to boil the kettle several times and cool the water down with more panfuls of cold water from the garden tap. With no place to drain the dishes (tools over every surface), they got washed, then immediately dried and put away individually.

Of course, now that the sink was out and the new taps were sitting unused in their box, my husband decided to fit them himself. It was reasonably easy, so now we had a frame, with taps but no sink and the taps were not connected to the water supply. Came Tuesday morning and we were in the car, arriving in the nearby town of Larne shortly after 8am to visit an old-fashioned plumbers' supply shop, where the manager knew everything about plumbing and supplies. By lunchtime, we were ready to lift the sink back into place and we again had a sink and hot and cold water supply.

The overflow pipe from the back of the sink would not fit on properly. I seem to recall there was a similar problem 18 years ago but don't know how it was solved. I just hope that it doesn't give my husband some more ideas for fixing things again!

How To Annoy A Breast Feeding Mother

Most men are fix-it types. Sadly, I am the "pay-the-other-guy-to-fix-it" type. That means I ain't worth much!

VinceSummers I used to be the 'fix-it-myself' type but since I retired from full-time employment I point-blank refuse to do any work in the home or the garden - I have morphed into the 'get-a-man-in-to-do-it' type!

Not the sort of job I'd consider doing anymore. My attitude these days is 'get a professional in and keep a local business going'!

Hmm, maybe the plumber can fix that part of it. Sounds like a big project!

I am an "at-least-watch-YouTube-video-about-how-to-fix-it-first" type--that helps me decide whether to take a whack at it myself or pay the other guy to do it!

Not getting that particular workman back. I don't appreciate workpeople who run off in the middle of a job because it was harder than they expected.

Worse case scenario would be paying them what they asked for and when they run into a problem that is more than they are willing to deal with unless you pay them MORE, its almost one of their tactics. Not once but almost every time a contractor bid on a job, they would end up asking for more at the end of the job, just because they think you would be willing to pay more when they say they ran into some complications. But to walk out on the job is something I would really hate to deal with and I would never recommend that type of contractor to anyone.