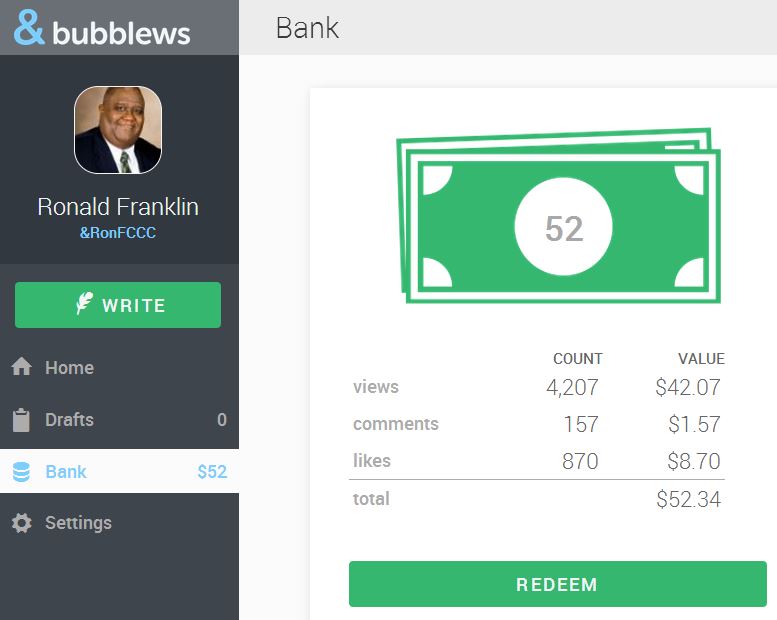 I just read Vince Summers' article Let's Be Real and Give Bubblews Its Due , and it reminded me of a couple of things about my Bubblews experience.

First, Bubblews was pretty good to me. I wrote over 800 posts there, and never had any problem getting paid until the very end, when the site basically stopped paying everybody. I think I only missed one payment that I was owed.

I never thought, as many said, that Bubblews was a scam, but just that it was incompetently and unethically run. I wrote several articles on HubPages, with titles like "Bubblews: Probably Not A Scam, But Not Ready For Prime Time," and "Bubblews: Maybe Not An Intentional Scam, But Not To Be Trusted." My conclusion that the Bubblews owners were acting unethically was not based on me feeling personally mistreated - as I said, I was treated pretty well - but on they way they misled and essentially cheated so many of the writers there.

But I must say, Bubblews was quite profitable for me. Not only what I was directly paid by them, but what I earned through my HubPages articles.

Of course, with Bubblews having shut down almost two years ago, most of my HubPages articles about the site no longer get any views.

But here's the (to me) surprising reason I say that Bubblews lives - one of those articles, How to Recover and Reuse Your Bubblews Articles , is still being read! In fact, it's received over 100 views in the last month. Not a lot, but far beyond what I expected so long after the site's demise. When I wrote that article, I planned to change its title after a while to remove the reference to Bubblews and make it generic. But I haven't had to do that yet.

To me it's amazing that Bubblews is still producing revenue for at least one of their writers.

Is PersonaPaper Making a Comeback?

I miss Bubblews. My experience with that site was positive. I got paid every time with only a reduced pay from what I thought I was going to get on my final payment. They changed the pay structure when I was owed a substantial sum of money. I was worried about that, but they paid me every penny of that..

I think you hit on the site being poorly and unethically run. They obviously has a good ad program paying very well. They used it to pocket a lot of money, but people exploited it. That led to the site being devalued and was the beginning of the end. When it was going well, I thought the layout was poor for us writers. I'd like to have showcased some of my favorite articles at the front pf my page, but they didn't allow that. Much like Facebook,. articles went down the memory hole.

When I knew it was over, I copied and removed every article I wrote, which was well over 1000. It's a shame that site died. No place paid better.

Just goes to show that articles that provide VALUE to their readers can become evergreen and provide continuing value for the writers.

I was a writer at bubblews and really enjoyed it a lot. I had many friends and followers there. I managed to help copy and convert other writer's posts onto PDF format for them to keep copies for themselves to publish elsewhere after the closing. We were given plenty of time and opportunity to save our articles and I was paid well for my contributions at that site. I will always have fond memories of bubblews because they actually treated me well there. I was fortunate. I got a lot of likes and views as well as encouragement from other writers and that was my stepping stone from the middle of the road between being a former Yahoo! Voices and Yahoo! Contributing Network writer and having been a long term contributor for Yahoo! Voices then moving on to personapaper as well as hubpages, pinterest, blogjob, thoughtz factory, and many more not to mention the one I still get paid to write at, myLot, which is basically a discussion forum that pays writers to exchange information and interact and get paid for their interactions. I still enjoy writing both at a few sites and realize that bubblews, like Yahoo! Voices and Yahoo! Contributor Network and Yahoo! Answers were the best place for me to be writing and interacting with other writers from the get go.

At first I couldn't believe the braggadocio. But, to be honest, I was pretty fairly treated or the most part. And, to be honest, the pay was good enough I was willing to take the occasional rip, as long as it wasn't devastating. Good explanation.

I discovered something by accident the other day. Bubblews.com is coming back. Someone has the domain name. It says it is returning soon. Now we all wait to see WHO it belongs to. I hope it is the UK lady who had the domain name in the first place!