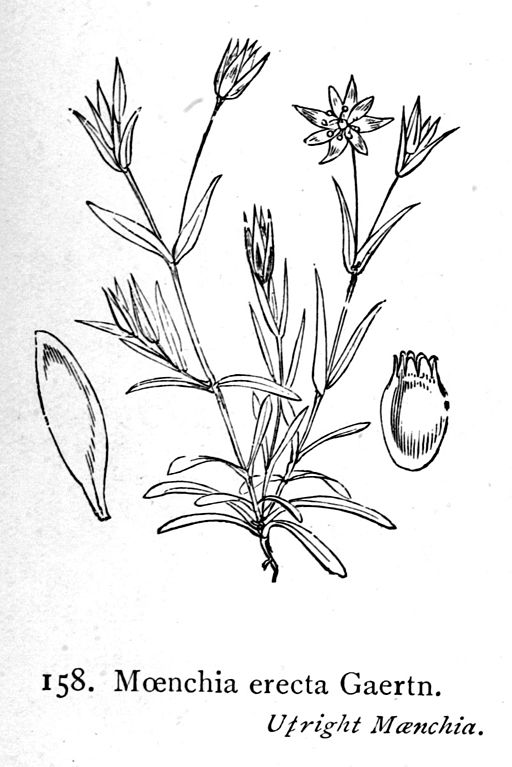 Upright chickweed (Moenchia erecta) is an unusual and somewhat strange plant. It can be found in England and Wales on sea-cliffs, dunes and rocky pastures, but it is not particularly abundant.

What makes it strange is that it is difficult to relate it to other plants. Despite its name it is not a chickweed, nor is it a pearlwort or a stitchwort, which are plants to which true chickweed is related. It has therefore been placed by botanists in a separate group of five closely related plants that are found in different parts of Europe.

Upright chickweed has a main stem that is, as the name suggests, upright, and it also has branches that grow horizontally from the base before also turning upwards. The leaves are broad and heart-shaped. The maximum height is 5 inches (12.5 centimetres).

The flowers appear from April to June. The petals are white and undivided, being shorter than the sepals which are pointed and have a white margin. The seed-pod is about the same length as the sepals and its opening is surrounded by eight teeth.

Artist's depictions are not as great as photographs are to show what a flower or plant is really like, but I get the idea that is just a weed and from the drawing not a very elaborate one either.

It can be hard to relate some plants to others without all the modern genetic techniques.