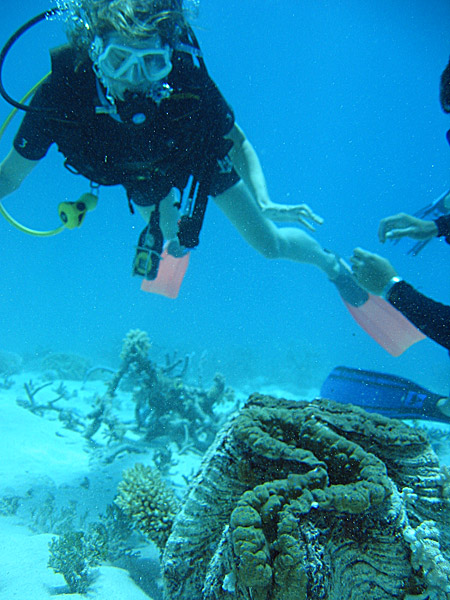 Clams are bivalves, which means that they have two shells that protect their soft bodies. These are left open when the clam is feeding on the tiny animals and plants that float in seawater, but snap tightly shut when danger threatens.

Clams feed by filtering water through the gills which then direct the food towards the mouth.

The clam has a single muscular foot that enables it to dig into soft sand to anchor itself. However, clams are able to move, either by pushing with the foot or by taking in water and pushing it out again in a form of jet propulsion.

Although most clams are small, the giant clam (see picture) can grow as big as 1.5 metres long. Clams, like oysters, can create pearls. The largest pearl ever found, at 12 centimetres diameter, was found inside a giant clam.

Razor clams have thin, elongated shells. They are very fast diggers, and pose a hazard to the feet of any swimmer who is unfortunate enough to tread on the sharp edge of one.

I have really never seen giant clams like the one in the picture in person and I do not think I want to either, but I like the kind you can eat either grilled, fried or baked. Delicious.

Years back there were lots of freshwater clams in a lake near by. Wonder if that is still the case.

I only seen clams in movies and pictures. It seems beautiful in real life.

I certainly would not like to have my fingers in the way when that shell snapped shut!