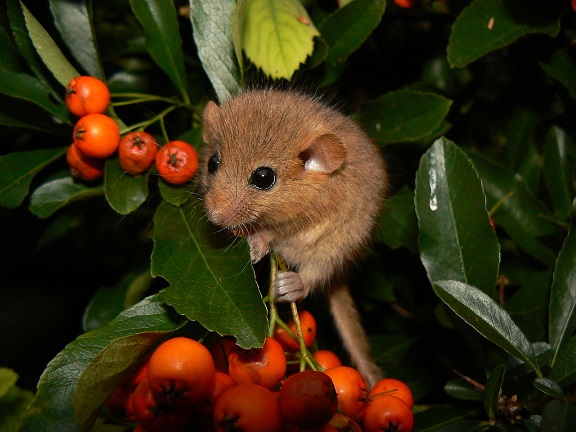 The name dormouse derives from its habit of spending much of its time asleep – ‘dor’ comes from the French ‘dormir’, meaning ‘to sleep’ (the scientific name of this animal is Muscardinus avellanarius).

The dormouse is six to nine centimetres in length and weighs 15 to 30 grams. It has golden fur on the back and is paler underneath. It has large eyes and a long fluffy tail. Dormice live in wooded areas where they feed on fruit, nuts and seeds.

Dormice spend to three-quarters of their lives asleep, much of that time accounted for by winter hibernation. They wake in Spring and may breed at any time between May and October, producing up to seven young in a litter.

When awake dormice are very active, as they need to be both to escape the predation of foxes (etc) and birds of prey, and to gather enough food to fatten themselves for the next winter.

When I saw Dormouse I immediately thought of Alice in Wonderland and the picture kind of looked liked the character in the book. Actually it would be kind of neat to have one of these for a pet kind of.

I love little rodents, they are cute

Cute little critter. When I was a year old my mom gave me 2 white mice to play with. I don't know how long that lasted. After all, I was just a year old and probably gave them to my dog apples to play with.

I best recall the dormouse from Charles L. Dodgson's Alice and Wonderland.

Around here they seem to like to forage along the side of the canal, crossing the tow path from the fields and waste ground running alongside