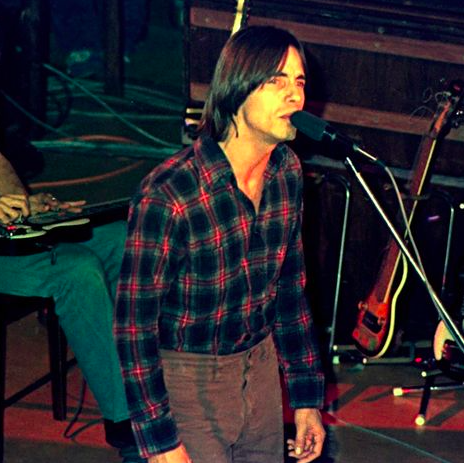 One of the most heartbreaking things over the past week following Glenn Frey's death is watching the tributes. By the same token, watching people sing along in memory is a healing salve.

On Tuesday (1/19) Bruce Springsteen, as one of his encores, did an acoustic version of "Take It Easy," maybe the signature song of the Eagles', at a show in Chicago. The sold-out crowd sang along to every word in tribute to the Eagles front man, who died January 18th of pneumonia and other post-operative complications following intestinal surgery last November.

The same night, in Clearwater, Florida, Jackson Browne also sang "Take It Easy." Browne co-wrote the song with Frey. Only the most ardent Jackson Browne fans know that Jackson also recorded it (on his second album, For Everyman ). Before he sang it, he said that he rarely does the song, even though he co-wrote it, because people would think he was "doing an Eagles cover." As with the Springsteen show, everyone in the theater sang along with Jackson . (He even pulled his monitor plugs out of his ear to listen to the audience.)

There's nothing that can explain the magic of a sing-along. If you've ever seen Billy Joel you know that the audience sings the chorus of "Piano Man" to him. It's not required , of course (there's nothing on the ticket that says "you'd better know the words to this song if you want to attend!"), and that's part of the magic: the spontaneity.

Last year Robbie Fulks had an "I Heart Roger Miller" night. The last song was "King of the Road." We began singing along, to the point where Robbie just stood on stage, listening to us. He even walked off stage, leaving the audience singing the song. It's not something you expect people in a bar in Chicago to sing along with, which may be part of the magic.

Then again, it's the magic of music. People are drawn together to one place by a common love of a certain singer, or style of music, or song. Something inside of us compels us to sing along. Or, as someone said, a guy onstage sings a song to an audience of a thousand people, and they sing it back to him for a thousand different reasons.

It's hard to watch those tributes to Glenn Frey. The pain is too fresh right now. But if I had been there I certainly would have been singing along, too. It's part of the magic of music.

Also here in our country, a lot of television shows and program paid tribute to him.

It's interesting that he seems to be receiving more attention than even David Bowie. Then again, Frey's music cut across a greater amount of people than Bowie's. That and more entertainers seemed to have interacted with Frey or relate to his music than they did/do with Bowie.

Sing-a-longs have that magic as you say and they work for all age groups. Just think when we get old we will still be singing these songs and the nurses will wonder. Take it easy, take it easy.

I agree. The Eagles had several country singles as well as numerous rock and pop hits. Bowie's main appeal was in rock, with a few "spurts" of "pop chart" hits (the mid-70s, then the mid-80s). There's been an Eagles tribute album ("Common Thread: the Songs of the Eagles" by various country artists) but no widely successful Bowie tribute album. I also think the fact that Frey's death coming so close on the heels of Bowie's was a major impact on the news. I wouldn't minimize either artist's death. Personally, Frey's was much more painful, simply because the Eagles were my favorite band in the 70's.

A sing-along can definitely be powerful. It's fun to sing with everyone, but it's emotional when it is to honor someone's memory.