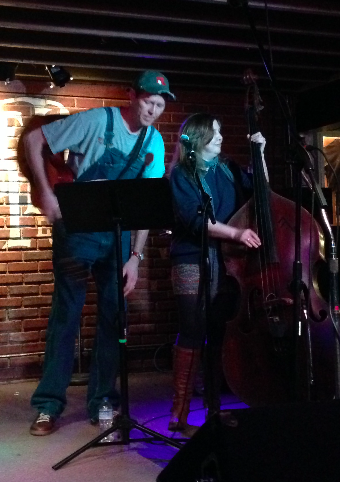 If you plan to travel in the winter, there's a good possibility that snow or ice will interfere with those plans. That's why I frequently say the only snow I like is Hank Snow.

For the second time this week I was forced to miss a concert. This time it was south of me, in Nashville. You'd think that would be safer, right? Ha. Because of the way the low pressure moved, Nashville actually got more snow than we did (they had eight inches there, twice as much as we got nearly 170 miles to their north). That meant that the only "Drive South" I was going to play would be on a John Hiatt album .

This time my missed concert was Missy Raines and the New Hip. She was scheduled to play at the Station Inn in Nashville. The snow storm that hit Nashville, however, forced postponement of the show. It will be rescheduled (great news for me!!).

Fear not, I'll answer your "who the heck is that" question for you.

Missy Raines is a rarity in bluegrass music: a female standup bass player. Additionally, she's the only woman who's ever won an International Bluegrass Music Association "Bass Player of the year" award -- and she's won that award seven times. (Only two other women -- Kristen Scott-Benson and Alison Brown -- have won a "best" instrumentalist IBMA award, and both of those ladies are banjo players.) She has many irons in the fire, too: she plays bass with a number of acts (I got to know her as she toured with Robbie Fulks), and she has two bands. One, the Helen Highwater String Band (say "Helen Highwater" fast and you'll get the joke of their name), plays predominantly bluegrass and traditional country. The band she leads, Missy Raines and the New Hip, is a hybrid mix of traditional country, bluegrass, and jazz.

I've seen them one time before, and they are simply spectacular. The musicianship is first-rate (which is normal in bluegrass: when half the audience also plays an instrument you'd better be good!). This was to be my second time to see her band.

This is the second time I've had to miss her, too: last year, Helen Highwater played in town at our bluegrass festival known as "Forest Fest." I had to miss that because it was raining, the show was outdoors, and I was still recovering from my ankle. This time my ankle is fine, but snow intervened.

I'm hoping to attend the make-up concert. Meanwhile, for your enjoyment as well as mine, here's Missy Raines and the New Hip .

WHO: Missy Raines & the New Hip

WHERE: The Station Inn, Nashville, Tennessee (postponed due to snow storm)

MORE INFORMATION: As previously mentioned, Missy is quite a busy lady, touring with her band, the Helen Highwater String Band, other artists, and teaching bass in music camps.

Well, if you're an Hank Snow fan, then you've been everywhere... man... and now you're moving on - right? Now that you don't hurt anymore, you can always try the Wabash Canonball and hope it doesn't end up like the Wreck of Old 97 when trying to get to a concert - right? Of course, even if it does, you know about those Ghost Trains, so... there's really no such thing as the Last Ride - ummm, right?

I kind of remember Hank Snow for my mom used to play his records on the old stereo we had when I was in elementary school.

He was referenced in a Jimmy Buffett song...."The ice cream man, he's a hillbilly fan, got 78s by Hank Snow."

Your comment has changed me from a Beggar to a King! It makes me want to live in Duquesne, Pennsylvania where I can go Ninety Miles an Hour Down a Dead-End Street on my way to a Rockin' Rollin' Ocean.

She was indeed a good singer. I love the duet she did with Paul Simon, "Gone At Last." Oh, the high note she hit at the end! She died way too young and deserved more hits than she had.

I am in total agreement with you