And Then There Was Snow... 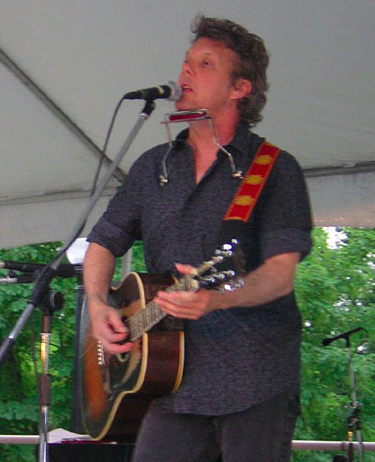 Every year I have, alongside the great concerts I get to see, a few that I miss. Last year I missed eight shows while I was laid up with my ankle. I've also missed a few because of illness (including missing Jon Langford and Reverend Horton Heat on consecutive nights).

And then there was snow. That's one of the downers of this time of year. I've got my eye on seeing Deke Dickerson in Milwaukee and Peter Case in St. Louis and/or Memphis. The weather, however, makes those a big, big "if."

Consider tonight. I was supposed to be in the Revival Room at the Southgate House Revival in Newport, Kentucky, seeing Steve Forbert for my fourth concert of the year. Instead, it's my first canceled show of the year.

So, who's Steve Forbert? Hey, he wrote " Samson & Delilah's Beauty Shop ," covered by Webb Wilder ! (Yeah, that helped, didn't it!

) Seriously, his two best-known songs are "What Kinda Guy?", which Rosanne Cash covered as "What Kinda Girl?" on her classic Seven Year Ache album, and his one "one hit wonder" hit, 1979's " Romeo's Tune ." That song made it to the Billboard top 15.

Now, here's the funny thing: I'm not a "huge" Steve Forbert fan. He's certainly no John Prine or John Hiatt in my books. Yet, I manage to see him about once a decade. Tonight would have been my fourth time seeing him. I most recently saw him in 2007 in Nashville.

So I missed my first concert of the year. There's more to come, as there's an anticipated winter storm standing between me and my next concert.

MORE INFORMATION: Forbert released a new album, Compromised, on November 6. It's his 16th album. He's currently on a tour promoting the album.

The ones I have made this year

Yes, that white stuff does manage to damper our plans! Hope that storm misses us both! And I hope you don't miss too many more concerts this year.

The drive is 100 miles of completely dark, quite hilly interstate....that, coincidentally, was closed for about six hours because a truck jackknifed in the snow earlier this morning. Nah, I'm not "weathering" driving in that for anyone.

We only got about an inch in the city but the people outside the city got a lot more - tomorrow morning should be full of delays for school.

Enjoy the reviews and I can see why you would be disappointed when snow or any other inclement westher cancels concerts.

Gosh, you see a lot of concerts!Hope you get through the snow to the next one.

yup better stay home , there will be more concerts in the future so your getting hit with the snow too?

My next concert looks very promising, for two reasons. One, the temperature is supposed to be in the 50's next week; and two, I have two shows that I want to go see on the same night, so if weather intervenes on one I'll go to the other!