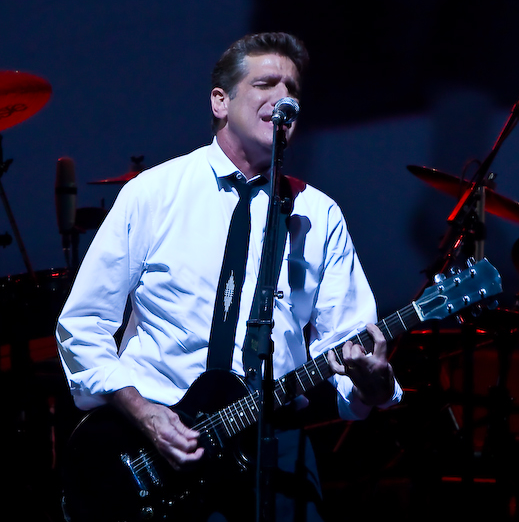 Glenn Frey has died. And I feel like I've lost a friend.

Last November, the day before his 67th birthday, it was announced that Frey would need intestinal surgery . Because of it, the Eagles' Kennedy Center Honors award was postponed until December 2016. Frey had undergone a number of intestinal surgeries in the past, including having a significant part of his colon removed in the early 90's. Frey attributed his problems to the "rock and roll lifestyle."

The announcement of his death from the Eagles' web site included a statement that he had suffered from rheumatoid arthritis and acute ulcerative colitis. The statement also mentioned that he had pneumonia, probably what took his life as he struggled to recover from the November surgery.

What can I say about the Eagles? Love 'em, hate 'em, they are as much a part of the American music soundtrack as any band. In fact, I would dare say that no other band with the exception of the Beatles has had the widespread acceptance of their music as the Eagles. (Of course, like the Beatles, there are plenty of people who think the Eagles were grossly overrated.) The music ran the gamut: the country flavor of songs like "Lyin' Eyes" (which made the country top ten in 1975 as well as topping the pop charts), the hard rock of songs like "Good Day in Hell" and "Heartache Tonight," and even a little bluegrass ("Twenty One" on Desperado ), blues ("Get You in the Mood," the B-side of "Take It Easy" that was never released on any subsequent CD or box set release) and R&B ("One of These Nights").

"We were breaking up from the day we got together," Frey once said about the tumultuous relationship in the band. Indeed, only Frey and Don Henley made it from the band's inception to the end of the road. Bernie Leadon left in 1975, replaced by Joe Walsh. Randy Meisner quit in 1977 (following a literal fight with Frey in Knoxville at the end of the Hotel California tour), replaced by the man who replaced him in Poco, Timothy Schmit. Don Felder, who was added in 1974 to give the band a harder rock sound, was fired by the band, sparking a nasty lawsuit and snipping that continues to this day.

The end, however, came in 1980, when the band was recorded for a live album (1980's Eagles Live ) in L.A. During the show Frey and Felder could be overheard promising to kick each other's read ends in a fight backstage after the show.

While their label wouldn't acknowledge that they had disbanded, each member began releasing solo albums. Frey's turn came in 1982, with his album No Fun Aloud . It spawned two hits, " I Found Somebody " and " The One You Love ," as well as an FM rock favorite at the time, " Party Town ." On this album he put more emphasis on his Detroit roots, where he learned a love of R&B . (A friend of mine sent me a tape of a radio show in Dallas where he played "guest DJ" for an hour, and he played three Marvin Gaye songs!)

He also began a brief acting career, appearing in an episode of Miami Vice based on his 1984 song "Smuggler's Blues." Frey had filmed a TV series, South of Sunset , for CBS in 1993. Despite heavy promotion during the World Series the show was canceled after one episode (Frey later joked it was canceled during a commercial break, which really isn't that far removed from the truth.)

As with other performers, Frey had some soundtrack hits as well. He sang the hit "The Heat Is On" from the Beverly Hills Cop soundtrack. His song "Part of Me, Part of You" was in the film Thelma and Louise .

This is deeply personal. The Eagles were my favorite band in the 70's, and they were my first rock concert, in 1978. It was at Riverfront Stadium, and Frey was wearing a Cincinnati Reds jersey with Pete Rose's number 14 on the back. I also got to see Frey's first post-Eagles solo concert in 1982, at the Tower Theater in Philadelphia. That's where I got to meet him. It was brief, but I found him to be funny (that may have been some 90-proof joviality, granted) and very personable to the few fans who had waited for a couple of hours after the show to meet him. That night he was hardly the nasty jerk that many people accused him of being.

The Eagles' first new song following their reunion in 1994 said, "There's a hole in the world tonight." That's how I feel.

Glenn Frey makes two major musical figures to pass away in this young year with David Bowie the first.

The music world has a big gaping hole with the passing of Glenn Frey. He will always be remembered!

I know, it's almost like this is the year of the "hall of fame member death of the week." It scares me because Mel Tillis, in the Country Music Hall of Fame, has been hospitalized for colon surgery...and rumors are that he isn't doing well.

The world, and especially those of us who grew up to the Eagles as teenagers in the 1970s, have lost an icon with the passing of Glenn Frey.

Aww that is very sad, i used to like the Eagles myself they had some really nice hits, may he rest in peace

It seems like a lot of performers are meeting their maker lately. They are all singing in harmony with no pain.