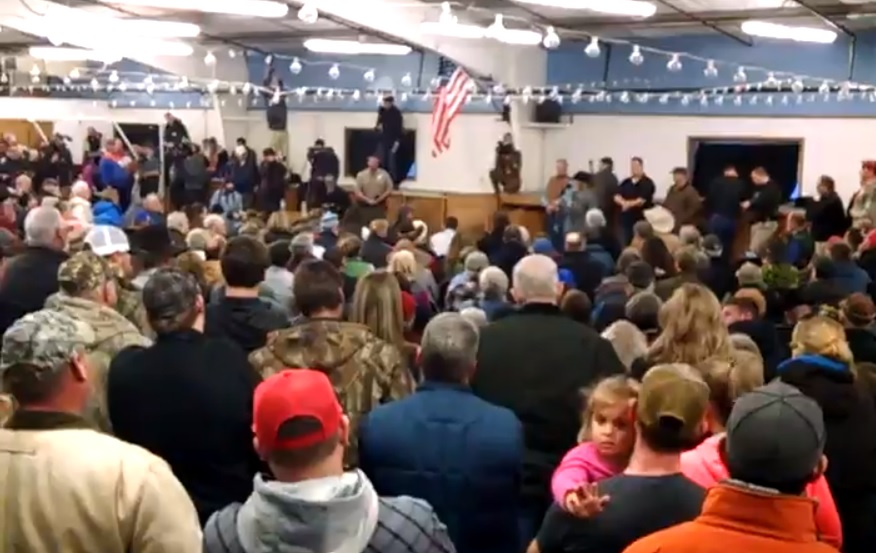 It was definitely a long day for me after finishing up my regular work and then covering the Oregon Community Meeting held last night with Sheriff Ward talking to the community and updating everyone on where they stand. He would not go into detail about all the outside organizations that have come in to help but there was a tone in his voice that said he did not agree with everything happening, "You are not going to come into our community and tell us how to do things", he remarked to outsiders.

I really got a sense of Harney County Community sympathizing with this group of people in the Oregon Standoff. However, Sheriff Ward made it very clear that whatever the cause how just you feel you are in asking for change...

"It was a lawful sentence that came down, changing it does not come from armed rebellion." Sheriff Ward # Oregonstandoff

I find it shocking President Obama can blame everything on guns and the NRA while this community not the armed group, the community itself is saying they have tried everything to help this father and son in jail and no one will help them. It's truly a community going through an emotional time, they feel let down and taken advantage of by the government and this has happened. It seems more like a last chance effort, "plea for help".

And I read all the racist social media remarks about these folks and there color why they haven't been arrested but the facts are right now...even with this group armed since Saturday mind you NOT one single person has been injury and the community people themselves say last night these people are not hurting anything, they are keeping the place clean out there, we don't believe they will harm anyone it's not their intention.

Sheriff says, "These people sparked something and we have a good platform to work from now." # Oregonstandoff

The biggest concern Sheriff Ward talked about where outsiders even though outside this group of people...

"There are outsiders here looking to start trouble they are not here to be on one side or another." # Oregon Community Meeting

"People are following members of the community around and it's not okay to threaten and intimidate people." Sheriff # Oregon

It's tragic when something like this happens and I hope the matter can be resolved without outsiders causing harm to anyone and without higher ups forcing the FBI to take a stand unnecessary which could and may lead to people getting injured and deaths. Sheriff Ward has asked the Oregon Militia to leave saying, "We understand, we get why you did this. You did it the wrong way but we got this now. Let's put away the guns and everyone go home. It will take time but we can bring about change.

I did hear at some point the FBI was going to shut off power to the area. It is uncertain if they have done so. The FBI has been very hush hush this whole time. Personally I think it's for political reasons they are trying to keep this from under the radar as well as hate groups. The sooner this ends the better for everyone.

Just when you thought your work day was over...

To take a quote from Downton Abbey, "What is a Weekend"

You are a go-getter and a true reporter.

It is sad that there are communities out there that have to go through this.

In my entire lifetime, I can count the number of times I've heard major news about something happening in Oregon. One time. This is it! Some places strike you as easy peaceful living and you figure nothing ever goes on there. So when folks from that place get riled up about something you think: “My goodness! What's going on?” It's not an event you would ignore. Like you. Hope nobody gets hurt and the matter can be resolved quickly.

I haven't been following this from Thailand, but judging from your reports, it is something I would like to find out about.

Waaaahhhh politics! I hope there are real genuine leaders who will look after to this case, and will not take advantage of it specially on elections whatever. I hope there is someone who really wants justice and fair to everything and everyone.