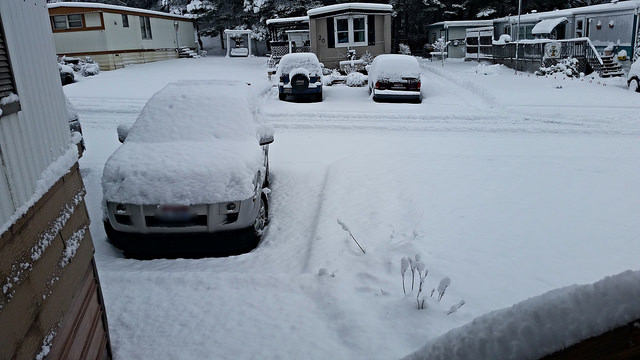 As you can see, it snowed last night. A lot more snow than predicted. I had to drive to work in that snow . I hate driving in snow.

Actually I don't mind it, it is that I have gotten seriously spoiled with hubby driving me to work everyday. The older I get the less I like driving and it is mostly because of all the idiot drivers on the road. Doesn't help either I live in a college town where a lot of the students haven't a clue how to drive in any kind of weather and the rest seem to think stepping right out in front of a moving vehicle is a good idea.

Thank goodness it is finals week, not many students out and about.

But back to this morning. Hubby wasn't feeling well, so I needed to drive myself into work. He asked if I wanted to take the car (Tucson) or the truck (Mountaineer). As much as I thought the car would be nicer with the heated seats and all, his suggestion of the truck was a much better idea. It is heavier, all wheel drive and we only paid $800 for it

So the truck it was.

Had to drive to the only gas station in town that has free air to put some in the one back tire that has a slow leak that we still need to replace. Then back the other direction to the university parking services to get a disability parking permit for the day.

Thank goodness it was late enough in the morning that the few people who were out and about were not in a hurry to get to work and were taking their time. Roads were packed snow and ice, even after being plowed.

Good thing too, on my way to parking services I looked ahead at the lights to realize they were turning yellow (tho that was hard to do with them covered in snow). So I gently applied the breaks (ABS) and they crunched.

I lifted off and applied them again and again, crunchy noises. And I wasn't slowing down (thank goodness I was already driving slowly because of the conditions).

Thank goodness the people who had the green waited since I ended up slowly sliding thru most of the intersection before I finally stopped. I quickly (relatively) scooted thru and pulled over for a minute.

Started out again and everything was fine, no further noises from the breaks.

As driving adventures go, this doesn't even rate to some of my most memorable, but it did make the rest of the drive more interesting.

Arriving to work was nice, this are the trees right out behind the building: 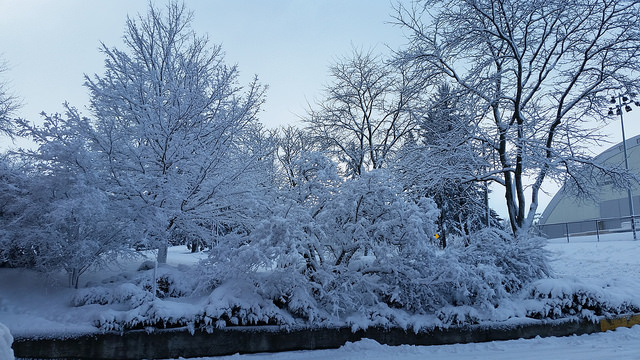 Wish I had more time this morning to break out my DSLR for some really good pictures from around town.

Well, that would certainly get my attention on the morning drive!

Very pretty scenes. Glad everyone was paying attention when it was needed

That's scary! I remember driving on snow one time (we don't have it often here) and flashing the lights to let a bus cross the road in front of me. Applied the brakes gently to stop the car and found it sliding and fishtailing directly towards the bus. Lifted my foot off the brake (that's hard to do when you want to stop) and the car slowed nicely with the odd tap on the brake. Phew!

I learned to drive in snow long ago and far away, but I don't think I could do it now. Or at least, I'd rather not. Glad your adventure had a happy ending.

Though beautiful, I do not care much for snow, unless I can look at it from the inside of a warm home and never have to venture out in it.

So am I. Would have totally ruined my day otherwise

That would definitely be a scary situation.

I am so hoping hubby is feeling lots better tomorrow when the next round of snow comes in. I have had my fill of winter driving already LOL!

I am rapidly getting to that point myself. But alas, my job requires me to be on-site, so out into I must go

Yes, my response to it too! Nice to look at but stay in.

I don't blame you. Hope your hubby is feeling better as well.

Oh dear, I fear I would have had a panic attack were I you! I do not care for driving in snow or ice one bit and prefer not to even go out in it at all! Glad it all ended up okay and that you arrived to work safely. Now get that tire fixed and the breaks looked after!