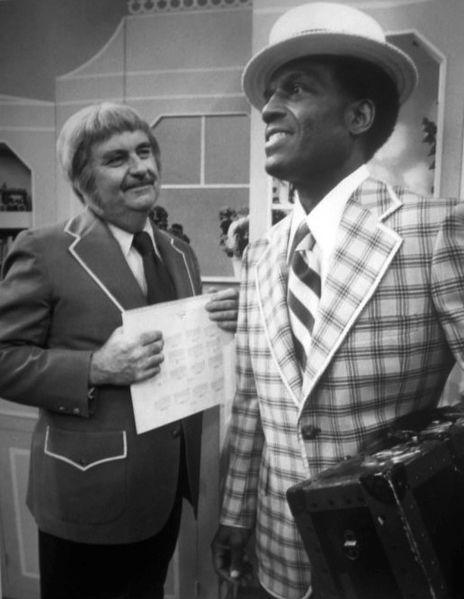 Nipsey Russell's contribution to the civil rights movement in North America and The World has been one of the most underrated in the entire history of civil rights and this article sets it straight. I originally posted this on Bubblews June 10th 2013 a link to that article will be at the end of this post.

If you were alive during the 1970s, you may remember Nipsey Russell as the ever smiling, game show panelist, with the ability to make up a rhyme on the spot. In the 1990s you may have seen his comedy sketches on The Late Show with Conan O'Brian. If you did not see any of these appearances by Nipsey, when they first aired, you may have seen one of them on a rerun, on The Game Show Network. You may have wondered who was this wacky man with that huge infectious smile. Then again you may have just taken his presence for granted. His presence on these game shows was a positive one, in more ways than just that infectious smile and bubbly personality. There was also more to Nipsey's career than those appearances on game shows.

Nipsey, was born Julius Russell, September, 15th, 1918, in Atlanta, Georgia. He attended Booker T. Washington High School in Atlanta, and in 1936, went to The University of Cincinnati, for one semester. In 1941, during World War II, Russell enlisted in the United States Army, as a private, served as a medic in Europe, and made his way to a rank of Second Lieutenant, before his return to The United States, in 1945. After, his return to Atlanta, he worked as a carhop at a drive-in restaurant, The Varsity, where his comic ability lead to increased tips from the customers. In The 1950, Russell began to preform at comedy clubs, which lead to “Party Albums” being produced, from recordings of his stand-up routines.

By the middle of the 1950s, Russell had teamed up with comedian, Mantan Morland, to replace his straight man Ben Carter. Their act, consisted of conversations between the two men, that were done in incomplete sentences, where each man anticipated what the other was going to say next. Examples of this act can be seen in the films, Rhythm and Blues Review, and Rock and Roll Revue. Also this act was dramatized in, Spike Lee's 2000 film, Bamboozled, by Tommy Davidson and Savion Glover. In the later 1950s Russell went solo, and had an appearance on The Ed Sullivan Show.


In 1961, Russell landed a supporting role, as a New York City Policeman, Sargent Anderson, on the comedy series Car 54, Where Are You?. In 1964, Russell became the first African American, to become a regular panelist on a weekly game show. The show was ABC's Missing Links. Also, because of Russell's uncanny sense of rhyme, he became an essential part of another ABC game show called, Rhyme and Reason. In 1965, Russell, joined the Les Crane Show, on ABC, as co-host. In 1968, Nipsey became a panelist on the revived version of the game show, What's My Line?. As the 60's grew into the 70's, Russell became a co-star, of a comedy series, Barefoot in The Park, which was also on ABC. During this period of time Russell, also made regular appearances on The Dean Martin Show, The Dean Martin Comedy World, and The Tonight Show with Johnny Carson.


In 1971, Nipsey became one of the featured panelists on the game show, To Tell The Truth, which was followed by the same status on The Match Game. He made regular appearances on Pyramid, during its run from the mid 70s into the 80s. In 1978, Russell, played The Tin Man, in The Wiz. Which allowed him to show off his talent as a dancer. He made another notable film appearance in the, 1994 film adaptation, of the series Car 54, Where Are You? His character of Sargent Anderson, was promoted to Captain, in the film version. In 1985, Nipsey, went from being a game show panelist to being the host of two game shows, Your Numbers Up, and a revived version of Juvenile Jury, both shows had brief runs. In The 1990s. Russell became regular on The Late Show with Conan O'Brian. Throughout the years Nipsey, also made several appearances on the beloved game show, Hollywood Squares. Russell's final television appearance would be, as one of the panelists for the week, on Hollywood Squares. On October, 2nd, 2005, Nipsey lost a battle with stomach cancer. He was cremated and his ashes were scattered in The Atlantic Ocean.

Nipsey Russell may not have been a politician, or activist, that we look at as being at the forefront of The Civil Rights Movement. Nipsey was, however one of the leaders of a velvet revolution that took place in the world of media,which had a great affect on The Civil Rights Movement. Nipsey was not in the media vocally demanding Civil Rights. That has its place. Nipsey simply did what he did best. He made people smile. He made people laugh. Nipsey's contribution to The Civil Rights Movement, was that he put in himself in the publics view. He was where, some people at the time did not think he should be, on television. Nipsey just lived, laughed, made others laugh,and, rightfully, acted like he should be there. Nipsey's talent and personality broke the color barrier on television game shows. You may think “these were only games shows, big deal”. I have a saying on my desk, that says “Everything Counts, Be Thankful!”. I am thankful that Nipsey Russell existed, and that as a child I saw him on television. As a white child, watching Nipsey on television in 70s, I did not think to myself “this man is black and he is making me laugh”, I only laughed. Nipsey's appearances on these simple little game shows, played an important role in social transformation. For that reason, they can not be ignored, also for this same reason, Nipsey was far more than just a panelist on a game show. Thank you Nipsey, your contribution to society, your wit and your infectious smile are remembered.

Originally posted at Bubblews at this link http://www.bubblews.com/news/641667-nipsey-russell-more-than-just-a-game-show-panelist

Photo Credit Publicity photo of Bob Keeshan and comedian Nipsey Russell in the Treasure House on the television program Captain Kangaroo.
Press release is dated 22 December 1976. The episode aired 21 January 1977. This work is in the public domain in that it was published in the United States between 1923 and 1977 and without a copyright notice.

Your Utopia Could Be Another's Dystopia