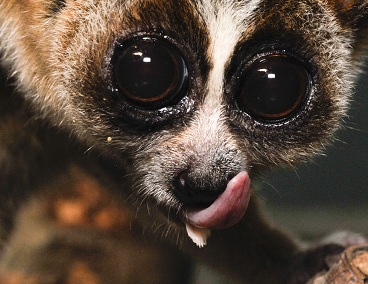 I originally posted this article on Bubblews and will provide the link at the end of the piece. The concerns raised in this piece grow even more dire as time goes by. Please read this piece carefully because although I feel some exotics are okay as pets the animal in question here is not one of those and the piece is only for infomatinal purposes and to dissuade people from actually owning one of these beautiful creatures.

The Slow Loris is a type of primate from southeast Asia, they have recently become trendy as pets, however the exotic pet trade may be doing more to hurt this little animal, than it is doing them any good.

These animal are illegal to keep as pets in most places in world because it is cruel and many die because of both legal and illegal trade of this species.

What is a Slow Loris

The slow loris is a small, nocturnal, primate. There are several species, the smallest of which is the pygmy small loris, and the largest is about the size of a small house cat. They have large heads with big round eyes and small ears.
The hands and feet of the slow loris are small, but have superb grip, they are noted for being able to hand for hours using their back feet. On each hand and foot their second toe is a grooming claw known as a “toilet claw”, and they do have thumbs. They have a few color patterns typically accented by white on their nose and patches around their eyes.
One of the most unique features of the slow loris is their bite, which is toxic. The slow loris has a gland on its arms which it licks and mixes with its own saliva to make a toxin. They use their bite to deter predators, and will also lick their offspring with this toxin to protect them. It is believed snakes and leopards can “taste” the toxin and will avoid eating a youngster that smells of it.
It is the problems associated with their bite that lead to most cruelty in the pet trade for this primate.
Slow loris do have an odor that some people might find offensive.

The slow loris is a omnivore, eating insects, birds, reptiles, and eggs, in addition to eating vegetation including gluta bark. They tend to prefer eating meat and insects over plants. In captivity they may be fed cat food, or a high protein dog food, as well as being supplemented with meat, cooked brown rice, fruits, as well as young mice or hamsters (often sold as snake food).
They need to be kept in a large space with areas that they can hang. Slow loris are nocturnal and will be awake at night, and somewhat noisy. They enjoy climbing and should have many branches upon which to climb and roam. An appropriate enclosure for these animals is a small room, or space at least 6 ft x 6ft x 6 ft. Unless in a large space, they are best kept alone and males should not be kept with other males. Stucco wire and 2x2's work well to build an enclosure. Be sure to provide a water source.
Due to the fact that slow loris do not tolerate stress well they should be kept in areas where they receive little trauma and stress. In other words they do not do well in a party-house or home with unruly children.

Cruelty in the Exotic Pet Trade for Slow Loris

Slow loris have poor reproduction in captivity, even zoos have a difficult time breeding them. As such most slow loris in the pet trade have been taken from the wild. Many die as a result of this stress alone, others due to a lack of proper nutrition during their captive period, but most die following the procedure to remove their front teeth (as is done to prevent a poisonous bite).
The teeth of the slow loris are usually cut or pulled out (not by a veterinarian) leaving the animal open to infection and bleeding. Many will stop eating due to the pain and discomfort, leaving them weak. It is estimated that more slow loris die than make it into the pet trade. Many slow loris are rescued from illegal pet markets do not survive the first month. Without their teeth they cannot be returned to the wild.
Currently the pet trade is reducing wild populations and putting the slow loris at risk.
Due to the known cruelty involved with the slow loris they are illegal as pets in many areas and their capture from areas where they are native is illegal. Even where they are legal as pets CITES (Convention on International Trade in Endangered Species) has banned this animal from international trafficking, meaning obtaining one from anyone other than a breeder (highly unlikely) is illegal. People who are trafficking these animals will try to tell you they are “captive bred” but you need to realize they are probably lying.

Note: I am not endorsing these animals as pets, I truly think the exotic pet trade is doing a disservice to the slow loris and many die in the trade for every one that becomes a pet. However since many people will insist on keeping them as pets despite my plea otherwise, I feel it is important to provide education on proper care to those people to help them look after the pets they have.
The slow loris is a cute animal and has been made popular in youtube videos, however these videos took advantage of the animals docile and protective nature, exploiting them to look cute. People should not be suckered in to the pet trade for this exotic animal as they are doing the species no favors and are in fact contributing to their demise.

If you want a cute exotic pet, I suggest a Silkie Chicken, Fluffy Bunny, or maybe even a Sugar Glider (although I am not so sure they should be pets either).

Article was originally posted on Bubblews at this link http://www.bubblews.com/news/622726-unusual-pets-slow-loris

When does the enlightenment stop and living begin?