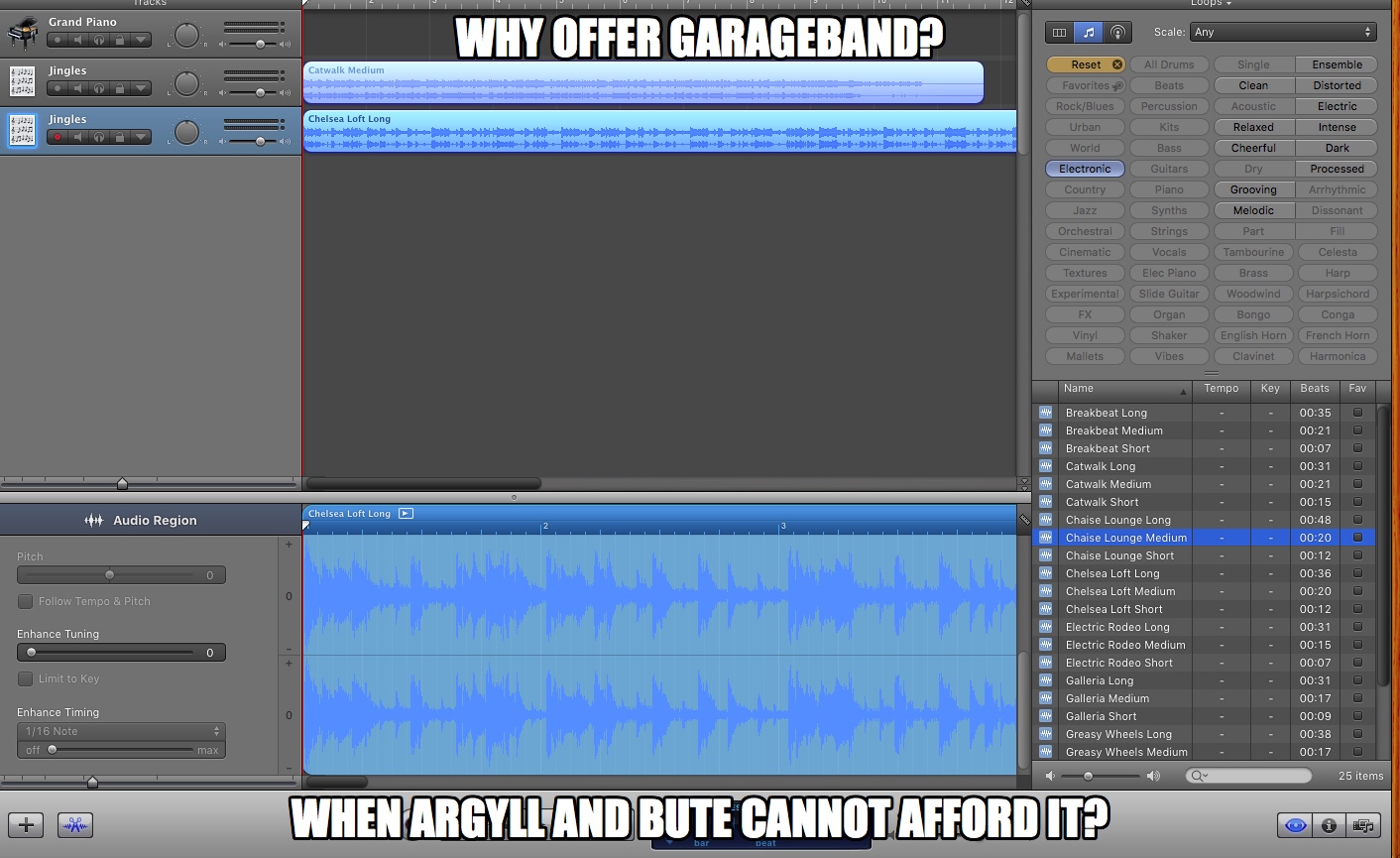 As a teacher I find it hard enough to work in Argyll & Bute due to travelling restrictions, endless council costs and general funding cuts with added surcharges being slapped onto local services that have already seen staff being streamed back to save money.

Last week it was announced that the Creative Arts Team (C.A.S.T) are supplying twilight / evening sessions to schools with several different training workshops planned. They supply creative arts in the region working with school pupils and sometimes some of the workshop events are a lot of fun as well as reinforcing the creative aspect of allowing pupils to be creative and expressive.

However, there is one course that simply isn’t worth the time and money in my opinion - and I have already been to the proposed session by CAST and Argyll & Bute a few years ago - "Garageband In The Music Classroom."

Why is it a waste of time? Because even with the best efforts of musicians and teachers who come to schools to deliver the hardware and their knowledge, the reality of Argyll & Bute council's lack of cash means schools in the region will never be able to add Apple computers to every school in Argyll & Bute. Infact come to think of it, the only way of getting a Mac computer in any school these days is if you bring your own unless your regional council have seen the light and have been lucky enough to embrace Apple technology. It's like giving a child a Christmas present but then eliminating the need for Christmas at all.

When I studied at teaching college in Edinburgh, Apple Mac had already landed in Edinburgh schools. "Fair enough," you might say given that Edinburgh is the capital of Scotland and everything the council implement should be of the highest degree for the benefit of pupils - but why isn’t it the case for every local council to undertake in the rest of Scotland out of the Edinburgh council region? Apple Macs are less prone to viruses for a start and a lot of their applications make a lot of sense in schools both for pupils and teachers.

As such ten years ago when I first went into the profession I had already seen first hand qualities of Apple Mac computers in schools including the all in embracing video and music making processes that can be had with the “free” Garageband software that comes with most Apple Mac computers provided that you have installed the iLife package.

Garageband outweighs a lot of other tech that survives in the music classroom separately and it eliminates the need to have sound engineering booths built in when the sound engineer and mixing tools that now form Pro Tools with Garageband-esque features are already available within the software hardware. Not only sound engineering, but the ability to give pupils the opportunity to create their own music or video, or even a moving video enhances the current striving process that Curriculum for Excellence aims to provide; building each pupil's attainment and opportunity to develop and flourish.

Whilst I welcome C.A.S.T because of their creative efforts, giving a training session in schools where the home owner organisation can't even afford to fill expressive arts departments with Apple Mac computers seems to be a total waste of time. Until Argyll & Bute change their desire to Apple Mac computers, the mere opportunity to work with these computers seems to be the only way by going to these once a year events by the C.A.S.T team. (c)Nar2Reviews2015.

Never Mind The Clouds! Why Do Basic Microwaves Not Have A Silver Lining?

Sadness of The Paris Attacks