I like to use my own pics here at Persona Paper, when I get to create new art. 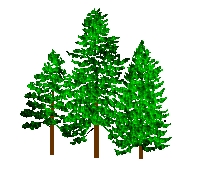 This pic of 3 trees was simple to create using a bit of style and of course that fundamental art program Corel Draw. You can do lots with texture mapping.

So when I upload a GIF image or a JPG or JayPeg image I know it will load quickly in any browser.

Several digital images are taken by the latest high resolution cameras that save images often as TIFF files. These files are so large that not long ago a computer would require expanded memory just to save them.

Today there are many people who like using TIFF images but they are large and take up lots and lots of storage at website databases.

The key to success is to reduce image files so they can load faster in smart phones and laptops and tablets and desktop PCs.

Some sites have the funding to allow submission of High Def imagery but most blogs use perhaps one or two large images for their main page and subsequently use much smaller .jpg or .gif images for the rest of their articles and use thumbnail images as links to larger images to allow faster load time and less buffering time.

Have you ever tried to send a pic to a friend via E-mail and fail to get it sent to them? I made the mistake of sending a large bitmap image to a friend via E-mail to their wireless phone and they told me the file was too large for their limited memory. I find that sending a link to the image that I want them to look at and having the image I want to share on Facebook, simpler and faster and more economical from a memory standpoint.

One site I know of called Pinterest, is a great place to share images with everyone. Another is called Tumblr. These photo sharing sites are growing by large numbers. You can easily end up with thousands of free images shared by followers at these sites that would quickly fill up any hard drive to the point of having to buy a second drive just to save the images and videos. I would have to suggest a minimum of 2 TBs of system storage for people who like to collect images.

I like the size 26pt font. Its easy to read and that makes it a very good thing for those with vision imparments.

I seldom use my own pictures here. I am also in Pinterest and Tumbler but not so active

Thank you very much for the great information about images in this post.

I know that you prefer the larger font, but I am going batty trying to read it. LOL Maybe the 18 font would be a good compromise? LOL

I have literally thousands of photos on my computer, most are relatively low-definition jpegs. I find that for normal viewing they work as well as higher definition tiffs. Even for images I take with my camera, I'll usually copy them at lower resolution so they load faster. Works well for me.

I used to play with POV-Ray. But that software is only good (in my estimate) for the ultimate stills.