Halloween Ideas: A pumpkin by any other name is a pepper 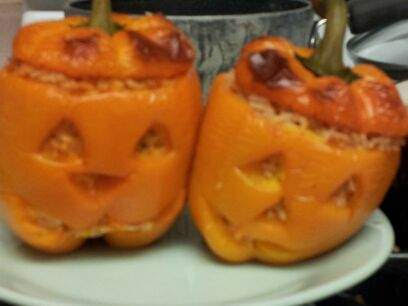 I have not celebrated holidays in the traditional ways for many years now. There was a time early on that I boycotted Halloween for religious reasons. Those days (of religiosity) are long gone.

Tonight I was pulling something together for dinner. I had ground turkey breast, onions, rice, salsa, and cheese in my refrigerator, and thought it might be a quick meal. But these orange bell peppers caught my eye, too.

I thought that I had better chop them up to freeze them, as I did with other peppers I had from Mr. L's garden. (The orange bells were store-bought.). I did the same with three onions, so I have them in bags and lying flat in the freezer.

All of a sudden, I thought how much like mini-pumpkins they were. So, I put all the ingredients together, and planned on stuffing the peppers. 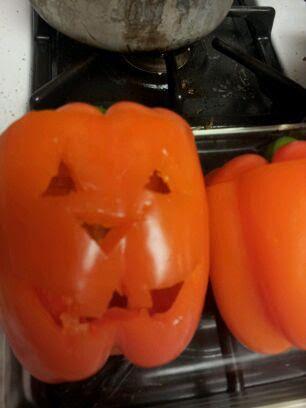 I really needed a thin sharp knife, as even a paring knife felt too cumbersome to work on these small "pumpkins."

Once carved, I took the cooked meat mixture, and stuffed the peppers, just as I would any other peppers. I put them in a small baking dish, put the tops back on, and into the oven they went. 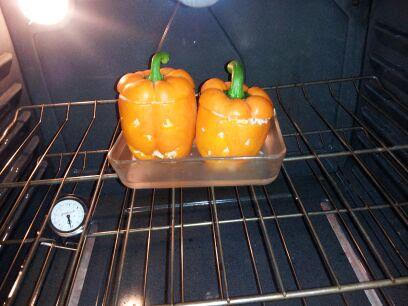 I baked them at 350F degrees for about 40 minutes.

When I took them out, I laughed. In fact, I squealed a little. It was as if I were a little kid again, doing the things that we saw as "cool" back in the day. And it made my dinner, and the Halloween season, just a bit more fun tonight. I still have one more if you care to share. 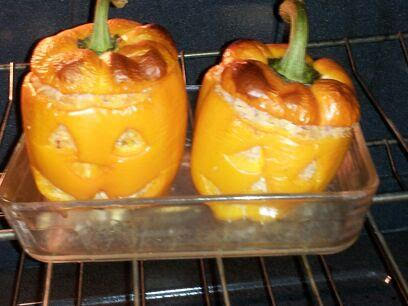 A Few Words Before Going to Sleep

Looks very tasty. I haven't done stuffed peppers in a while

I hadn't either, and I thought these orange peppers would be fun!

These look frightfully delicious. Shared. I think my Fakebook friends will like these.

The stuffed peppers appear to be tasty.You are right,they do look like mini pumpkins.

You should stick a photo up on Pinterest. I and a lot of other people are pinning lots of Halloween stuff at the minute and I have been looking for recipes that are savoury, as well as all the sweet stuff out there. Those sound just right!

That is such a cool idea. K and I often make stuffed peppers but usually use green peppers. Next shop we'll have to get some red, yellow, and orange peppers and give this a try.

That is adorable and looks too good to eat. You need to find a way to preserve it as a center piece.

Halloween is a night for kids and who like to try to scare people and watch a scary movie or two. The religious side I just think of the next day 'All Saints' Day'.
Your stuffed pepper idea very creative. I make stuffed peppers every once in awhile to.

Those look so delicious. I do not see much Halloween celebration here but there are already Christmas decorations in the malls

What a clever idea. They also look delicious. I'm hungry just looking at them.

Ooh, this is cute. I kind of want to make these. Such a cute ideas.

Hoping to see something creative for Christmas

Glad you're sharing lots of posts about Halloween . Last year at My Blog Stop! I shared Halloween posts. [ http://cmoneyspinner.blogspot.com/search/label/Halloween ] Was looking for some new content to recycle this year. Your Halloween posts will be perfect. Hope my sharing them results in more unique views for your content. HappyHalloween

Thank you, cmoneyspinner ! I will take a look at the blog, but not sure I can get to it this weekend. I'm swamped before my flight out.
Hope all is well with you! Hugs.