My Wife Thinks You're Dead 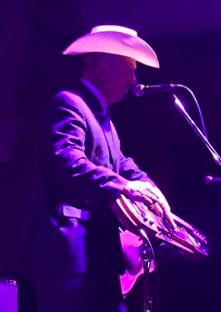 In the early 1990's Junior Brown began making a name for himself with his neotraditional country sounds and superb guitar playing. He invented an instrument he calls a "guit-steel," a double-neck instrument that has a six-string guitar on the top part and a lap steel guitar on the bottom, and developed a dedicated following for his great guitar playing and fun songs.

I've enjoyed his music since I heard his "biggest hit" (such as it was, it only peaked in the the low 60's on the Billboard country chart), " My Wife Thinks You're Dead ." I'd never seen him live, though, until Thursday night (9/24), when he played at one of my favorite venues, Southgate House Revival in Newport, Kentucky.

I was amazed at his guitar playing. He handled both the steel and the standard guitar with splendid perfection. He was country to the core, even when playing a "surf-rock" medley of songs like "Walk, Don't Run" and "Secret Agent Man." His wife accompanied him on rhythm guitar and even sang lead on "I Wouldn't Buy a Used Car From Him" (a hit for Norma Jean in the 60's).

Oh, was it fun. The best part of the concert was, after the show, Junior Brown went to the merchandise table and signed autographs, posed for pictures, and talked to the people who'd come to see him. As I was leaving I heard someone behind me thank him for signing autographs.

The Hooks Got the Hook

Televangelists and Their "End of the World" Prophecies

That sounds like it was a great night out. I didn't know what to expect from your title.

I have listened to his "Free born man '' and some others.I loved his surf-rock melody songs.His guitar playing is not only to be heard but something to be seen.His wife on rhythm guitar too was good.

It appears that you had a great time at the concert. Did you get Junior Brown's autograph or a picture taken with him?

Country music is cool. I have seen these instruments and they are neat to listen to for you know it is country when you hear these.

I did indeed get a picture taken with him. He is a very gracious gentleman.

There was a prompt in the "all-new 30 day song challenge" that was for a song with a great title. I almost picked this one, but opted for "I'm Sorry (But So Is Brenda Lee)" instead.

The man sounds like a class act all the way around--talented and entertaining, yet humble.