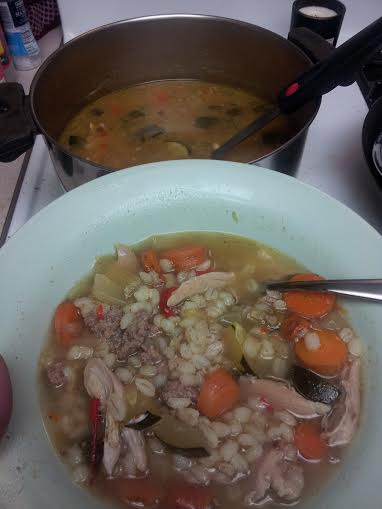 I am trying to get my life back on an even keel. There are times that I am better at it than other times. I have found that I have let some things "go" that I must really concentrate on managing better. Nothing (of which I refer) affects others, but it certainly affects me, and my willingness to allow others "in." For this reason, I know that it is up to me to make some changes.

I have begun my process. I have done quite a bit of laundry and have sorted things to donate. Tomorrow morning I must put things away where they belong.

I also cleaned my refrigerator-freezer, throwing out the "science experiments." There were too many things that I had to throw out; I did not dare calculate the money spent, as I would have felt some extreme guilt and shame for the wastefulness. I cannot go back and undo it, but I can be more aware than simply shutting down to avoid whatever it is that makes me do so.

I also did a preliminary inventory of what I have, and am going to adopt some of the same strategies and behaviors that I had back in January, when RGD was staying with me to recuperate.

One thing I made was a big pot of soup for dinner, so I could use and re-purpose some of the things that I had from Mr. L's garden, and some things I had in the refrigerator-freezer.

After browning the sausage, I put everything in the pot, except the barley, and brought it to a boil. Then, I turned it to low until the carrots were cooked. I turned it back up to the point that it was getting ready to boil, added the barley with a quick stir, covered the pot, and shut the burner off. It was ready in 15-20 minutes.

While things were cooking, I scrubbed the refrigerator down, sorted vegetables and put them in their proper containers, and rearranged the fridge. I also collected my trash and recyclables, put them in the bins and took them to the curb for tomorrow's collection trucks.

Not having eaten but one bagel and a cup of coffee all day (around 2:00 p.m.), I was hungry and ended up eating two bowls of soup for dinner, while watching several episodes of one of the TV seasons I have from the library. Dessert was a cup of frozen blueberries.

Once cooled, I filled eight one-pint containers with soup, and they are in the freezer. They are much better than the cans of soup I used to keep in my cupboard, and much healthier, too.

Though it is now 4:40 a.m. and I am exhausted, I am feeling rather accomplished tonight, even though I still have so much more to do to get things back to what they need to be. But, I definitely can see some progress.

Now, it is time for me to set my alarm for 9:30 a.m. and see if I can get about four hours of sleep before starting my day all over again.

I also have to remember to call my daughter tomorrow. It was 40 years ago, at this moment, that I was laboring and getting ready to get to the hospital. It took me eight more hours to give birth. Where has the time gone?

It was almost as if I were "nesting" tonight, just as I did the night before she was born.

Freedom Always Comes at a Price

I used to participate in a weekly thing called Food Waste Friday on one of my blogs, its when at the end of the week you inventory the food waste that you have to throw away from the fridge- and post a picture along with that inventory. That keeps you on track of what you are wasting. I think I'll start doing that again here on Fridays.

I hate those science projects when they happen. But most of mine are not a total waste as the chickens will still eat them at least.

I like throwing whatever is in the fridge into a pot and see what comes out. Sometimes we have a right little triumph!

Mine, unfortunately, were not mostly leftovers, but produce and milk, and more. *sigh*

That maggot on the Turkey picture sounds disgusting.

Interesting, and I think that you might be onto something. I am game.

Oh, no, this was even worse than chickens would be fed.

Yes, it can be quite triumphant!

The soup sounds good. I'm afraid I might chow it all, leaving you none.

Divorce is a good thing. It's a far better option than spousal abuse. I no longer wish anything bad on my ex but I'm sooooo glad I'm divorced !

I think she is too.

I'll do it this week too. :) And tag you in the post. It'll be interesting to see what I have to toss out this week, since I haven't gone grocery shopping.

Mind you there is the odd dodgy one. Never use parsnips instead of potatoes in bean soup!

I'm glad the garbage bins were filled last night. I would have been embarrassed to have had to photograph last night.

If I did not know what they were, they may taste a bit funny. But I LOVE parsnips. I use carrots in bean soup quite regularly.

I cant imagine it being that bad.

Me too, I like to make a shepard's pie with mashed parsnips instead of potato, that is a good combination.

No. I meant you beating him up. LOL!

It's in the freezer. Bottom shelf. In the Talenti ice cream pint containers. Take several. There are 8.

Again another philosophical article, but nothing wrong with that. Organizing and taking inventory whether personal or perpetual is good no matter what time you do it.

That's me. I guess I tend to think a lot.

You have not seen what they will eat lol. I throw it out and that evening it is gone. No matter what it looks or smells like.

Thanks for sharing an insight into your day and another good recipe. I would never be able to function with only four hours of sleep at my age.

Paulie I'm not sure that I am "functioning," as much as simply "existing." Some nights are worst than others.

Cleaning and decluttering in the physical world seems to create a similar effect in the mind. I always find that "things" are clearer if I have spent time doing this. And that soup looks delicious.

And thanks about the soup. I think I'm going to make split pea soup soon, and put some of that up in the freezer, too. I'm trying to get these individual containers put up in the freezer with some variety, so I won't feel like I have nothing to eat. Part of my troubles is that I don't want to feel there is no variety.