Can't wait for next spring 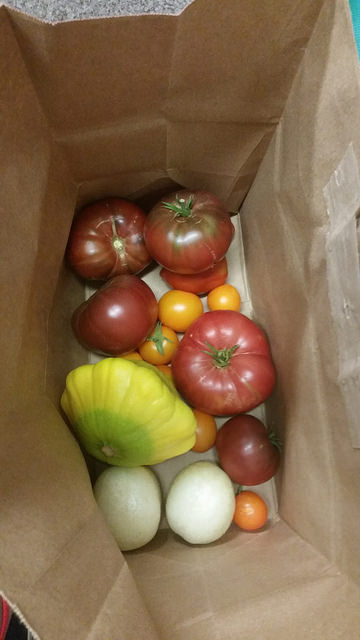 Since my attempt at gardening this year went seriously awry with the forced move and all (my poor seedlings never stood a chance with it all) I am getting started now for next year.

A co-worker had brought in some extra yummies from her garden and I pretty much claimed all the tomatoes. Said tomatoes are now in the freezer after being chopped up, drizzled with olive oil and herbs and roasted.

They almost didn't make it to the freezer, I took a taste once they were out of the oven. I SERIOUSLY restrained myself and now have a couple quarts (those are some pretty good sized tomatoes) in the freezer.

I seeded them as I chopped them and put the seeds into jars with water: 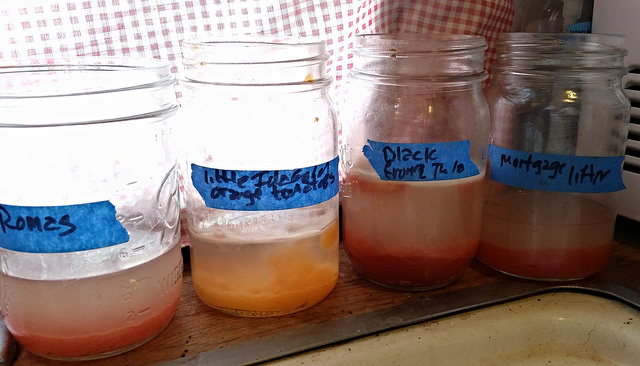 This is called fermenting. They have been soaking for several days and I swirl the jars to loosen the goo and such still on the seeds. Next step is to rinse and finish cleaning them. I usually then dry them on paper towel or napkins. Screen would be better, but I have so few seeds I don't go that far. Usually isn't a problem when I go to start them, any left on paper is simply compost.

So what are they, well, the Romas are the usual. The other 3 are more interesting. The HUGE one is a Mortgage Lifter. That darn thing almost filled the baking dish I was using all by itself.

The darker, slightly smaller ones are called Black from Tula. Never seen them before but they are tasty. With my Black Krims I should have some seriously tasty tomato sauces to can next year.

The orange ones are call Ida Golds ( Solanum lycopersicum ) developed by UIdaho researchers. So cool to be growing something developed by my university. They are an ultra-early tomato (58 days) and good for cooler climates. I have my fingers crossed with these. Love the idea of having tomatoes early.

Must look out for Ida Golds. We have a very short growing season, so those could be useful.

Oh yeah. When I do have tomatoes I was usually having to either bring them inside if they were in pots or covering them with garbage bags and anything else to keep them going until they got close enough to pick. Going to see what else we've developed, I came across mention of a couple other varieties.

Hopefully, next year will be a better growing year for you!

I am pretty sure it will be

I didn't know you can save tomatoe seeds, thanks I think I'll give it a try.

Good luck. If you get heirloom tomatoes that works the best.

Hope you have a very nice garden next year. Right now I have been gathering flower seeds

Nice to see paper bags are still around. Sometimes it seems plastic is kind of everywhere. We are busy planting being at the start of spring here, and hopefully the frosts are done for the year.

So, you do this to the seeds to harvest them for next year's planting?

Cool. I need to see about getting Idaho specific seeds for my flower garden next year. I will be using my tire planters for those. Have them set around the lawn.

There are times where paper is the only way to go. Good luck on your garden :)

Yup, even tho seed is pretty cheap, there is just something satisfying about planting and growing food from the previous year's harvest.

I plan on doing more tire stacks in the garden next year for my vining plants. They did amazing in the few I used this year.

I've pretty much given up gardening. The only thing that does not suffer from bugs is peppers. Maybe they're trying to tell me something -- like keep away from peppers?