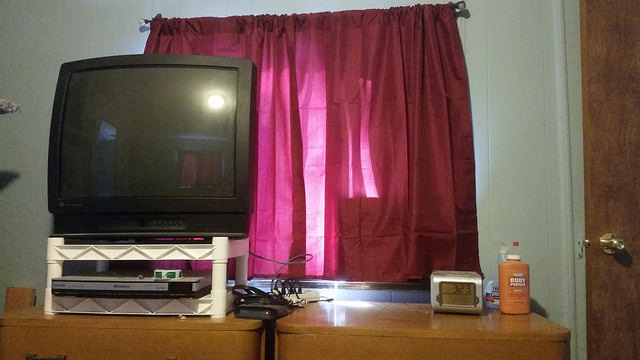 The problem with dealing with the deconstruction of the old place means settling in at the new place is hit and miss. I still unpacking boxes and neither the kitchen or office are even closed to organized.

But I now have bedroom curtains

Hit the Shopko Labor Day sale and picked up a couple 84" long panels and since the extra fridge was now closer to the door (hopefully on its way to the dump as we speak) I was finally able to set up my dining room table and dig out my sewing machine. I cut the panels in half and hemmed the raw edges.

The original hems were more than adequate to slide the curtain rod thru, so those became the curtains for the west window. The original tops are hung on the east window: 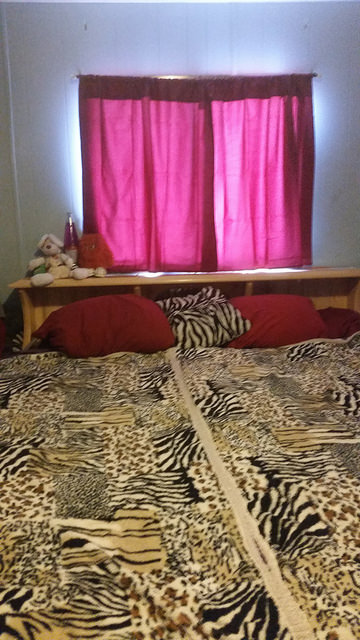 The light makes them look rather pinkish, but they are more of a burgundy red. Goes very nice with the color of the walls. Do have to get new curtain rods tho. When I moved the hooks out a bit, discovered they are too short. Hence the dip in the ones over the bed.

The TV in the one pic is currently in the living room, our big screen TV died and I really needed to see my races, so moved it out to the living room. It is fairly old, hubby had to use several different connectors hooked together to accept the HDMI from the cable box. Will do for now.

Not sure if we will be able to get the big screen fixed. Issue is the power supply and frankly if we were to pay $500 to get it fixed I would much rather get a large flat screen TV that doesn't take up as much room. Speaking of replacing, would love to keep moving that really old on out the door and to the charity shop and replace it with a nice sized flat screen in the bedroom.

The kitty condo is going to live at the local humane society. It will be greatly appreciated as several of theirs are in sad shape. This one is seriously solid and will handle their kitty horde nicely: 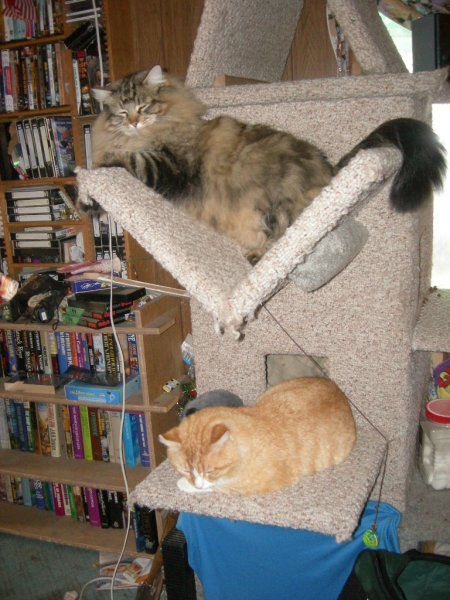 If it could survive Rum Tum and the rest of my big kitties, it will be fine at the shelter.

Having it out of the bedroom REALLY makes the place look bigger. I will get the girls something a little smaller (like one of the barrel shaped hidey hole ones that take up a lot less room) to replace it.

If I am going to destroy myself on the weekend.....

Can't wait for next spring

I am guessing your anxiety is decreasing as you are able to get things into place and your satisfaction is increasing -- that's a win-win for certain.

Definitely a win-win. Can't wait to finally get my dining room chairs out of storage and actually sit down at a table for a meal in my house for the first time in almost 20 years LOL!

Yup, in between everything else. Short bursts of somewhat productive busy in the house. Going to be nice when I can just focus all my attention and energy on it.

Things will come together as they are meant to. Love the curtains. I need to try to find new ones soon. Mine are getting very old.

In due time you will be able to accomplish these things.

I love the idea of the extra fridge gradually creeping closer to the exit door!

I am glad to know that you are getting settled.You will feel really settled when you arrange the dining chairs and have meals at the dining table.

Will really be nice that when my mom and aunt come for Thanksgiving they won't have to eat off of TV trays LOL! Feeling so much more civilized with the table up.

Next are the curtains (or lack of them) in the office. Got blankets up now. Will find hubby some good thermal, blackout curtains. Then, the living room. Still not sure yet what color or pattern I will go for. Have to wait till everything is better settled before deciding. Do need to lower the rod height, I want to put up curio shelves over the window.

That is is. Just have to be patient.

It has crept to the front porch now. Should have gone to the dump yesterday, but the one of the guys who was supposed to help didn't show up, so that will get done another day.