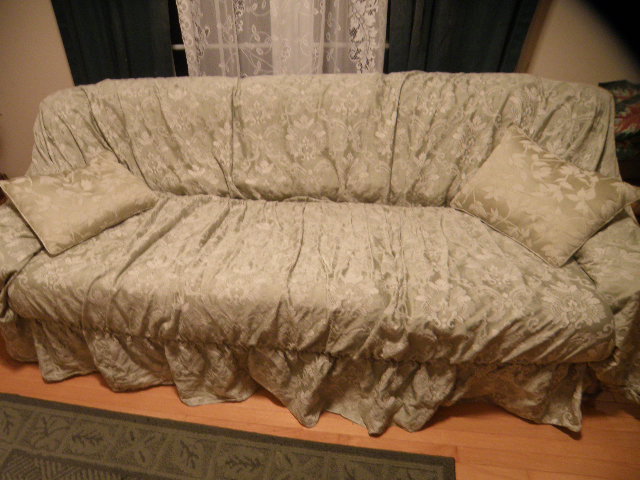 One of the most satisfying things about owning your own home is the ability to control your own space. When it comes to interior design, that can be a dream...or a nightmare. Even with an art degree, I, too, have had some epic fails. Here are my top five interior decorating mistakes, for your reading pleasure.

The laundry room of our rental condo sported a linoleum floor straight out of the '70s, with a pattern that was predominantly avocado. I can't take the blame for the flooring, but my attempt to go "designer" by matching the wall color resulted in a, shall we say, "overabundance of tropical flair". At least the washer and dryer are white. Good thing that was a small space!

The carpet in our first home was a rose color, which looked cheery with the plain white walls. But after we moved out and kept the house to use as a rental property, I wanted to give those boring walls some color. Anticipating replacing the rose carpet with a seafoam green, I chose pale green for the walls, but after I'd finished painting, we ran short on cash and decided to let the carpet stay through one more tenant. Unfortunately, the pink-and-green combo made it look like a preppie Easter bunny had painted the place--one prospective tenant actually got angry that she had driven an hour to see it! Fortunately, we found tenants who found the color scheme inoffensive, and we eventually replaced the carpet with the seafoam...just in time to sell the house.

I decided to repaint the kitchen with a ragging effect to disguise some oil stains on the walls. Inspired by Tuscany, I chose a combination of lemon yellow and a darker butterscotch. Despite what you're thinking, it actually came out fine; the only problem is that the kitchen had a pass-through, so the wall continued into the dining room, which continued into the living room (OK, pretty much the whole front of the house). I wasn't about to rag the whole place in Tuscan Countryside, so my brilliant solution was to glue a piece of trim vertically down the wall between the kitchen and dining room. Did it look ridiculous? You betcha!

Our new house was much nicer than our "starter home," with brand new hardwood floors. I decided that the Persian rug given to us as a wedding present by my friend Kathy would be perfect for the foyer, so I happily unfurled the lovely rug over the shiny wood floor. Later in the day, I found the rug all rucked up against the front door. Wondering what had happened, I straightened it back out. Later that evening, we heard some noises from the foyer, and discovered the rug in a disheveled state yet again. We eventually realized that our cats were taking running leaps and using the rug as a sled to zip across the slick floor! So much for the classy new rug in our classy new foyer.

Our leather sofas had seen better days; over the years they had sustained a little too much attention from the cats. Despite all the scratches, they were still comfortable, and so slipcovers seemed the solution. But the slipcovers were apparently FedExed from Satan's Lair, because it took me two hours to figure out how to make the large, amorphous blobs of material fit (and I use the term 'fit' laughingly) on the sofas. The things had fitted edges, but what did they fit? I finally settled on an arrangement that made a bit of sense after enough pulling and tucking, and the sofas looked fairly attractive. The only problem was that if you actually sat on them, all the tucking became untucked, and the amorphous blob was back. No wonder that thing was in so many horror movies!

Photo taken by me, of my couch, with the evil, evil slipcover.

Maybe You Shouldn't Use that Coupon at Hotels.Com

Those do come un-tucked real easy, huh. I hate them.

I would have loved to have seen a youtube video of the cats skidding across the floor! What's wrong with green walls and pink carpet? Sounds nice to me!

Never tried slip covers and I now know not too lol. I think my biggest ooops was trying to paint over paneling. It came out ok but I hate the ridges in it. Hopefully soon I can get some paintable wallpaper to put over that and then paint it right.

I once tried to recover an old sofa in denim with white beading. We had bought the material, the beading, the fixings and new cushions and spent the best part of two weeks working on it but still couldn't get it to sit right we gave up and bought a new sofa!

I, too, hate those damned slipcovers. They are just as bad on the chairs. LOL

Ah, the best laid plans of mice and men. I, have had many unfinished projects that started out great, but turned out like crap. Classic FAILS! LOL

Lol, I have foregone slip covers and went directly to sheets to cover a much-loved but well-worn couch. Yep, still had to tuck it after someone sat on it, but I could make it fit the way I wanted it to. I think people who create slipcovers probably have a sadistic streak. : )

I think sheets are probably better, although they do constantly come untucked. I should probably just bite the bullet and get another couch, but I looooooooove this one.

I, too, would like to see the video of the cats sledding on the rug across the hardwood floors,