Flashback Friday: The rain in Spain falls mainly on me (Seville, 1988) 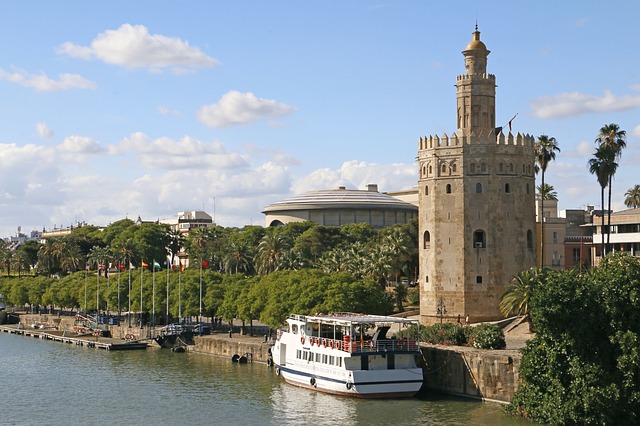 It’s now 3:45 p.m. EDT in Miami, where the skies above are getting dark and gray and accompanied by distant booms of thunder. The temperature is 91 degrees Fahrenheit under (no surprise) thunderstorm conditions (90% cloud cover). It’s not raining at present, but you can bet your sweet bippy that it soon will be. Again, it’s lucky that I don’t have to go outside, because I don’t like getting caught in torrential rainstorms. I’m also not a big fan of lightning strikes.

I’ve been soaked by many heavy downpours over the past half-century. The most memorable – or the most miserable, if you prefer – occasion took place when I was studying abroad in Seville, Spain in the fall of 1988.

One afternoon in mid-October, I was on my way home from a residencia where Ingrid, one of my friends from the group of Semester in Spain program, was staying. We had gone there to chill after our morning classes and, since it was Friday, we didn’t have afternoon classes at the University of Seville’s main campus. We chatted for a while in her room, then I saw it was almost 3 p.m. and decided to go back to my apartment, which was across the Guadalquivir River in a neighborhood called Los Remedios.

I was in the middle of Seville’s Parque de Maria Luisa (Maria Luisa Park), which lies next to the Guadalquivir River and is the biggest “green area” in Andalucia’s largest city.

The sky had been cloudy when Ingrid and I left the College Consortium for International Studies Center at the heart of Seville for her residencia apartment after our last class, but I thought I’d make it home to my apartment before it rained. Alas, it was not to be. It was drizzling lightly when I left Ingrid’s place, and by the time I reached the center of the park, a botanical preserve with a 100 acre area, big fat raindrops were falling from the sky like so many transparent water balloons,

I was on the Avenida de los Cisnes (Swan Avenue) and headed toward the Avenida de las Delicias (Avenue of Delights) when the pitter-patter of big fat raindrops suddenly became a deluge. It was as if the rain gods had opened a heavenly spigot. I’d been able to avoid most of the first big raindrops because they were coming down haphazardly. But this escalation by Mother Nature was all-encompassing. My world had become a watery and windswept hell. I literally could not see anything further than my outstretched arm.

Since I couldn’t see the sun or any familiar landmarks, I quickly lost my bearings. I walked south along Avenida de los Cisnes for a while, then got seriously lost after I passed the Isleta de los Patos (the Duck Islet) that’s located just above Avenida de Pizarro.

Right below Avenida de Pizarro there’s something called the Glorieta de la Concha. I’m not sure what a Glorieta is, but that bit of Maria Luisa Park features a central hub where several paths meet. I knew one of those paths led to the Avenida de las Delicias, which is where I needed to go if I wanted to get to the bridge over the Guadalquivir…and home.

I had made the trip across the park many times during my first few weeks in Seville, but always under fair weather conditions and during daylight hours. And though technically it was daylight, the canopy of trees and the rain combined to make it look as if it was night. With visibility close to zero, a stiff breeze blowing almost at gale force speed, and endless walls of water everywhere, instead of walking down a straight path, I was going around in circles.

For two hours I was stuck in this Kafkaesque horror. Every time I thought I was near the Avenida de las Delicias, I’d catch a glimpse of signs that said “Avenida del Conde de Colombi” or “Avenida Rodriguez Cano.”

The rain tapered off eventually, and I managed to straggle my way home like a wet rag doll. I survived my watery misadventure. I also caught a cold which waxed and waned from that day until I left Spain on December 18, 1988.

(The Torre del Oro in the photo was a landmark that I saw every day during my walk from my apartment to the CCIS Center during my Semester in Spain stint. Obviously, I couldn't see it on that rainy October afternoon, or else I'd have found my way home faster.)

Flashback Friday, Part II, or: How I learned to stop worrying and love the (soccer) ball

Glad I bumped into you here! I have been posting off and on but I am still trying to figure out spacing and how to get things to post with a normal streamline look

I normally write my posts on Word then copy/paste them here. Saves me a lot of pain and suffering with font sizes, formatting, and whatnot. Nice to see you here, missfortune !

Getting seriously wet and chilled like that cannot have been good for your health.

Great post! Been caught in several such deluges myself over the years, with the resultant colds just as bad as you. Glad to hear I'm not alone, and thank you for giving me the idea for a post.

No. If I recall the timing correctly, I arrived in Seville on Sept. 21, 1988. This was after Columbus Day (October 12). I became symptomatic with a cold the morning after the deluge. I had that cold (or several recurring colds) for quite a while.