For years this subject has been debated in Bible studies.

Read the story for yourself. You draw your own conclusions.

For those unfamiliar with the biblical account, Rahab was a harlot (prostitute). Two Israelite spies were sent into Jericho , the first city in Canaan, on a mission to spy out the land and they were seen going into her house. Nothing unusual. She's a prostitute. Men are always seen entering her house. But these men were different. The king was fully aware of their intentions and he demanded that she give up the spies. Rahab told the king’s men the spies did come to her house, but they left and she didn’t know where they went. Even though she said that, she knew that she herself had hid the spies on her rooftop.

What would call her statements?

* A misrepresentation of fact?

What? You mean those spies? Oh! I thought you meant those spies? Spies come in and out of this place all the time! (O.o)

That's what she said. And … ??? The men just took her word. There is no indication they even searched the premises. What kind of loyal king's men were they? That part of the story by itself is incredible! Talk about slackers! (???)

She knew herself. She knew her own heart and her own mind. She knew she risked her life to protect the spies by lying to the king's men. But she had only heard stories about the God of Israel , the miracles in Egypt , and their deliverance from Pharaoh. She didn't know those men! How could she be sure that those men would honor their word, honor their God, and not lie to her! Who told her they were honorable? She had exceptional faith to believe they would keep their word and spare her and her family. She had tremendous love for her family . She didn't just try to save herself. Because she was converted to Judaism , it would seem she had a hope for a new life, a new beginning.

Studying biblical characters is for me, personally edifying. 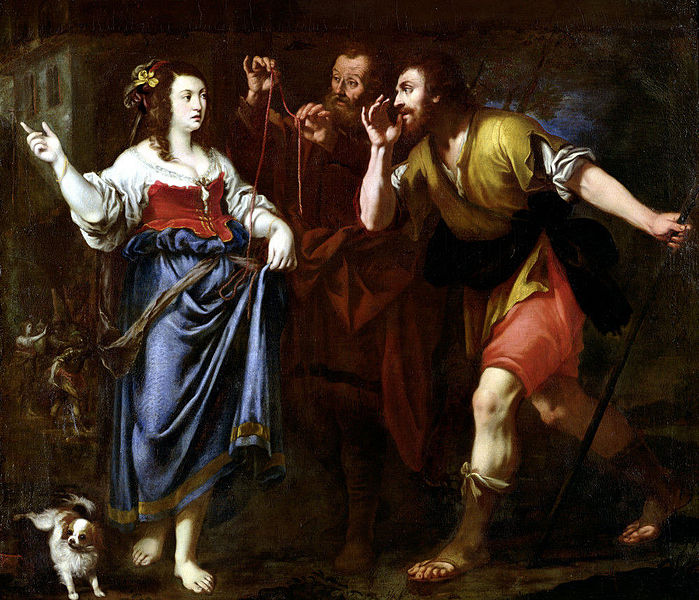 This is another example of the grace of God to ALL who believe and put their faith in him.

Let's look at it from another perspective (I know that some are going to hate me for this one): Perhaps, Rahab, lied because she was trying to save her own skin, as we all do when we lie. After all, she was human. Because there is a Biblical reference to it, we call her a "woman of faith" for making the decision. Do we know (factually) that she got away and "sinned no more"? The stories passed down, and in this case recorded in a compilation of books know as "The Bible," have been labeled as the "Word of God," which have been accepted by some to be absolute truth. Perhaps, there were other accounts of the same stories, that were discarded by those who wanted to sell their stories as reality and truth.

I am not disputing that the stories happened, but I have often wondered, since I was a young child, the other alternatives. As you can imagine, this type of wonderment/questioning did not go over well throughout my years in private (church) school, Bible studies, Sunday school, nor Baptist High School, any more than it did as an adult in counseling with church leaders to "fix" me and my questioning, of which I was shamed for decades of my life.

That's something to think about it. But I'm still working on the fact that she knew the story of God's deliverance of the Israelites from bondage, as if it had happened yesterday, when decades had passed and without hesitation she believed the story, she believed the spies would keep their word, and did not just try to save herself but made arrangements to save her whole family.

The other point is why tell her story this way? Why not embellish, embroider or … lie about it? I mean … how would we know? Why not make a heroine of unquestionable character? It's a thought.

I am unfamiliar with this story, and I'm not sure what spying out the land entails--were they looking to convert people? Or were they trying to figure out plans for an invasion or an attack? Or were they just nosy and wanting to see how people lived and how the local governmental structure or the community worked?

This was the Promised Land. You should have some familiarity with Jewish history or ancient history and the rise and fall of various nations. But even if you have no knowledge about the story's background, IF you found yourself in a situation like this woman found herself in, what would you have done?

In this life, many people find themselves in circumstances beyond their control. As Billy Joel sang: “We didn't start the fire.” You may not have started it but you're in it and all you want is out! You have to make really complex, complicated, and difficult decisions which they hope will lead them to a better place. You may come up with a viable solution which should work but other people have to do their part to make it work. For Rahab she survived because the emissaries kept their promise. But if those spies had lied to her, the story would have had a different and likely very tragic ending.