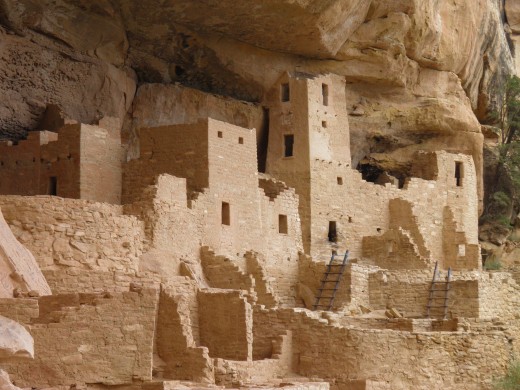 Situated in the Southwest, in the Four Corners Region, Mesa Verde was the first National Park established to "preserve the work of man", in 1906. We have visited it often and are always in awe of the cliff dwellings that the "Ancient Ones" or Anasazi have built. They were the people who lived there between AD 550 and AD 1300.

There are a few major cliff dwellings, like Cliff Palace, the one in the picture, which consists of more than 150 rooms and 21 kivas, or ceremonial centers. Researchers believe that abut 100 - 150 people lived in this particular dwelling. Balcony House is another one of the major sites here, with about 40 rooms and a few kivas. To visit both these major dwellings you would need a guide, there are no self-guided tours available. However, there is another one, Spruce Tree House, that visitors don't need a guide, can just walk to it. There area quite a few more cliff dwellings to visit, so going to Mesa Verde need to be usually a two-day tip at least.

This archaeological zone does seem to be in the middle of nowhere. But there is a hotel on the premises, a few restaurants, and a really great camp ground, so there is no need to rush through the site. We usually spend at least two days or occasionally three there, and every single time we feel that it was worth it.

Awesome! I have never seen a beautiful park such as this (if that is the real picture)

Yes it is the real picture :) , and only one we took, there are professional pictures out there of this place that look even more amazing. It is beautiful. Thank you for stopping by and commenting.

I visited Mesa Verde as a kid. It was pretty memorable.

I'm sure it was. It is an amazing place. Thank you for stopping by