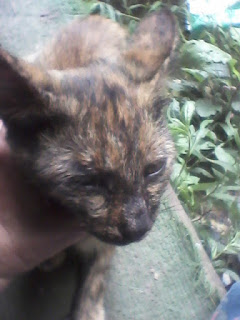 I've posted introductions to the cat family before (http://priscillaking.blogspot.com/2013/08/meet-cats.html), but there have been some changes over these two years. For one thing, Grayzel is no longer with us.

Ivy and Irene still look much the way they did at http://personapaper.com/article/26448-answer-your-cats-questions-day; once in a while Irene still gives me the "Why are you so stupid?" look shown at http://personapaper.com/article/22777-why-irene-should-not-have-kittens ; and here's the official face shot of Heather, showing her heatherknit-looking coat, brownish amber eyes, and big ears, but not her creamy-white spots or extra toes.

" Heather , Irene, and Ivy? What happened to Iris?" Iris grew up at the Cat Sanctuary, which is the official name of my home in cyberspace, but she no longer lives there. (I try not to give cats names that are in use by living humans I know, and wouldn't have used the names of the She-Kings of Xanth if I'd e-met Iris Somberg before these cats were born.)

I had hoped to keep the calico kitten Gwai, last year, and had kept the most Siamese-looking kitten, Sisawat, so that Gwai would have somebody to play with. Gwai never bonded with me, and moved out, herself, at an early age. Sisawat stayed. She hadn't bonded with me either, but I resigned myself to her being another lifelong resident, anyway. Kittens who become classic Siamese cats are almost white at birth. Sisawat's coat darkened to a uniform gray color as she grew up. Although she does have a patch on her nose (paler gray) and is social, nobody seemed likely to want an adolescent cat with a classic Siamese voice, a classic Siamese temper, and an un-distinguished, un-Siamese look.

By "Siamese temper" I don't mean that Sisawat is mean , at all. She can be lovable, and even when she's in an unfriendly mood she doesn't want to hurt people. She just will not be picked up or petted if she doesn't feel like being picked up or petted. She allows people to touch her sparingly, as a reward for good behavior.

As mentioned last winter, I would have preferred for Irene not to have kittens this year. Possibly Irene suspected this, because she and Heather pulled a real April Fool's joke last spring: http://priscillaking.blogspot.com/2015/05/the-april-fools-day-kittens.html . Although they gave birth on different days and in different nests, Heather and Irene integrated the litters right away, and when the kittens started scampering about indoors, first Sisawat and then Ivy induced lactation and shared the kitten-rearing experience.

Cat haters like to claim that if cats aren't spayed they're likely to give birth two or three times a year. If mother cats are unable (or unwilling) to keep their kittens nearby, that can happen. Commercial "cat breeders" separate kittens from their mothers as soon as the kittens can eat solid food, so that the adult cats will produce more kittens. At the Cat Sanctuary we had one cat, one year, who went out and placed her kittens in other homes to clear space for another litter. Usually, certainly in this social cat family, the mother cats' preference is to stay close to their kittens. They can usually keep the lactation cycle going for five or six months; whether they intend it to or not, this prolonged lactation usually (not always) prevents ovulation, so they can have sex again without becoming pregnant. It's possible that Ivy and/or Sisawat will have kittens this fall and, if so, it's likely that Heather and/or Irene will induce lactation and help rear those kittens.

The resident raccoon turned against the cats and killed three of this spring's eight kittens (http://priscillaking.blogspot.com/2015/06/phenology-and-why-christian-needs-gun.html). We no longer have a resident raccoon. Three of the kittens, the black one, the red-orange one, and one of the "biscuit-colored" pale orange and white ones, are still in residence.

The black one answers to the name of Imp. If they hadn't been April Fool pranks, I would have tried calling her Imbri, first (Xanth Fans will remember why); but she accepted "Imp"--after hearing that it might be considered a short form of "Important Kitten." I couldn't have made that up if I'd tried. I couldn't have made up the way she's growing up, either. Under the black baby fluff her skin is mostly white, and the undercoat that's growing in by now is another heatherknit-type mix of black and white. And she's acquiring clumps of long white hairs at the backs of her ears. She's always had random white hairs scattered through her coat, about as thickly as I have those on my own head by now. She could be described as a black cat who's growing gray.

The other two look more ordinary (at least in a family where pale orange cats are common)...but although they have only the normal eighteen toes, the thumblike toes on their forepaws are larger than usual and have double claws. So they do express the polydactyl gene.

I think Imp and I started to bond a few hours after she was born. In the absence of unforeseen and dire life-changing events, she's not available for adoption. Since any of the three kittens now cries whenever, and for as long as, the others are out of its sight, none of them is available for adoption, at least until they reach puberty and become more independent...Some kittens this age would be delighted to wake up and find that they no longer had any siblings at home. Imp would not. Imp is not a normal kitten. Neither are her siblings.

Why Was The Cop So Nice?

Oh, how I loved reading about your cats. I adore kitties, but I am, unfortunately, highly allergic. Otherwise, I would have a jungle-full.

Cats have some fascinating dynamics, for sure.

I lost my two cats in two consecutive years. I feel bad everytime there are kittens who are being killed by humans or by any other pest animals. I love cats since my dad brought home a cat whom we all dearly loved, but he passed away with the unknown cost. There are lots of people wants all the cats dead in our neighborhood. Maybe they want to pet lots of rats just like before when we don;t have lots of cats nearby.