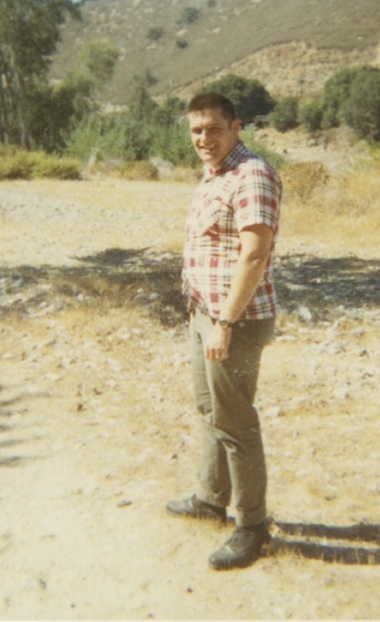 Yes, I really did encounter a freshman named Freddy, but that’s not him in the picture. The picture is of Kosta, now my husband of almost 49 years. This is pretty close to how he looked when we were students living in Dykstra Hall, a coed dorm at UCLA, in 1959. At that time, Kosta was one of the student leaders of Bruin Christian Fellowship, the UCLA chapter of InterVarsity Christian Fellowship. He was the unofficial leader of a group of Christians who met regularly in the dorm for prayer and fellowship. One of those times of informal fellowship was dinner.

Most of the Christian students in the dorm ate meals together, and their roommates and other friends, Christians or not, tended to come along and eat with us, since our table seemed to have the most fun. There was always a lot of laughter, and this tended to attract people. Normally Joyce and I and Kosta were in line before the dining hall opened. Our friends got their trays of food and joined us as they came in to sit down at the long tables. When people finished eating , they either left to go study or got another cup of coffee or tea and continued to sit and socialize until they were ready to leave. This was before Kosta and I were dating. I was a junior.

Almost everyone who had been around the dorm for very long knew Kosta and what his beliefs were. Most of his friends and acquaintances had been invited to the inductive Bible studies held in his room or been in a serious conversation with him. But he had once played football in Canada, he was a swimmer, and he still looked athletic. You could often see him on the dorm’s basketball court in a casual game. It was well-known that some of the football team also lived in our dorm on the first floor. They were popularly known as “the animals.” Kosta lived on the second floor.

Kosta was often recognized from across a room by his loud and infectious laugh. He was also somewhat rowdy and many had been victims of his practical jokes. But he also had a way of drawing people together and making strangers feel welcome. His humor wasn’t cruel or sarcastic. That’s one reason a lot of shy people wound up at our table. Another reason was that we were all kind to each other.

So one night, Freddy, whom none of us knew, asked if he could join us. He’d evidentially observed us. My roommate Joyce, a pretty blonde, was also part of our group. (Read more about Joyce and Kosta in The Frame-up,

To Freddy it appeared that our table was where the rowdy, fun-loving, popular types hung out, although none of us were in the “in group” on campus. Freddy didn’t know that, though. He just wanted to be where it appeared the action was, and he wanted to be part of it.

Freddy wanted to fit in. He wanted to impress us, even though we were all upperclassmen. He was from New York and he thought he could wow us, Joyce in particular, by being as crude as possible. Joyce did not enjoy being the center of his unwelcome attention, but she wasn’t all that experienced in handling such things. The more Joyce shrank from his verbal advances, the harder he tried. He couldn’t figure out why he was bombing out.

After dinner that night the dorm was showing a movie in the dining hall and we were all planning to go. Freddy sat as close as he could to Joyce, but we did protect her from letting him get too close. All the other guys in our group could see what was going on, so they helped create space between them.. After the movie, Freddy started making a play for Joyce again, so she asked Kosta to talk to him and explain that his behavior wasn’t appropriate.

We all watched from a distance as the two talked, and later Kosta reported Freddy’s shock. He couldn’t believe we were all Christians because we were having the most fun. Freddy, being Freddy, was not embarrassed about his presumption, and he asked Kosta if he could continue to sit with us at meals. Kosta said he could as long as he behaved respectfully to the women in the group. After that he behaved and we all got along.

It always pays to know something about the people you want to impress before you start trying to play up to them. Otherwise, the impression make may not be the one you were hoping for.

Pictures and content are original and may not be used without permission, B. Radisavljevic, Copyright 2013, All Rights Reserved

First published on Bubblews.com and removed.

Why I Haven't Been Posting

Very occasionally I think I missed out on the whole living away from home at college/university thing, usually when I hear stories like this. it sounds like you guys had so much fun. However I quickly remember that I doubt I could live with other people and that doing so would involve sharing a bathroom which I definitely couldn't do! Allowing the other half to live with me was honestly one of the hardest things I have ever done, letting someone share my bathroom (I am a little ocd about my bathroom) and knowing that my food issues would be impossible to hide where huge things for me, especially since he is a chef!

My entire life and view of the world would be different had I not gone away to school and lived on campus. It was one of the richest experiences of my life and did teach me how to live with others and get along -- good preparation for marriage.

This is a very interesting story about your Christian friends who lived in the dorm. I also lived in a college dorm during the 60s and we did have football players living there. Yes, they were called "animals", too.

Very handsome man, your Kosta. I enjoyed reading this, BarbRad

Freddy was rather impudent .Kosta seemed to be the mainstay of your group and put Freddy in his place .The likes of Freddy may draw useful lessons from Your story .

What a good looking fella you have! Sometimes people just need that little nudge to get them to straighten up. Did Freddy ever get Joyce to go out with him?

Wow, I almost feel sorry for Freddy who was so clueless about the unwanted attention he was giving to poor Joyce. Glad it turned out ok.

Where did you go to college? Funny how similar students are in their terminology.

He's still pretty handsome. He is just barely getting tinges of gray in his sideburns. All his friends at the gym can't believe he's 75.

I actually don't know if the Freddys of this world really learn from these experiences. He didn't continue to hang out with us once he found the group he was really looking for.

Never. Joyce was very shy. Freddy was definitely someone she would not have gone out with. I don't think he even asked her. It was Kosta she really liked.

You need not feel sorry for Freddy. He had no business to behave as he did without lurking a bit to see what we were like.

I attended the University of Wisconsin in Madison 1962-66. When I lived in the dorm as a Freshman, there was an "animal" in a room a couple of doors down from mine.

He wasn't your sort ,so it was only a matter of time for him to leave your group .

Well since Kosta was so nice who could blame her?

I never really got into the whole campus experience. I started West Georgia winter quarter after I finished my high school required courses in the fall, and spent two quarters in the dorm. It was a lonely experience for me, even though I was only an hour from home and drove back and forth on the weekend and Wednesday night/Thursday morning so I could attend church. I was much more content at Middle Tennessee, even though it was four hours away, sharing a trailer off campus for a year and then getting an apartment by myself. Sometimes I regret not socializing more, but I've always been more of a loner and I think being around other people all the time would have driven me crazy.

True, he should have learned more about you before making his moves, but from his POV I am sure he felt embarrassed when he found out.

No one. He definitely thought she was attractive. His parents would have preferred her to me. She had European background and all the homemaking skills I lacked. I guess God just had different plans for all of us.

My first semester at U.C.L.A. was about like your experience. It was an all-girl dorm -- the only one on campus at that time. The only males I saw were other girls' boyfriends waiting for them down in the lounge as I went in and out. Had I had a different roommate there, I would have died of boredom, since I tended to get along with men better than women. Most of my friends in high school had been male, and I hated talking mostly about clothes, hair, crushes on TA's, etc., that most girls I met in that dorm talked about. Carol, my roommate there, was willing to talk bout ideas and beliefs, and we were both searching. When I moved to Dykstra Hall, which was coed, everything changed, and life felt more normal. It was easier to make friends because I was following Carol over there and she knew people. We agreed to get different roommates so we could meet more people, and Joyce, who had been there before, also knew people I didn't. That helped both of us expand our circles.