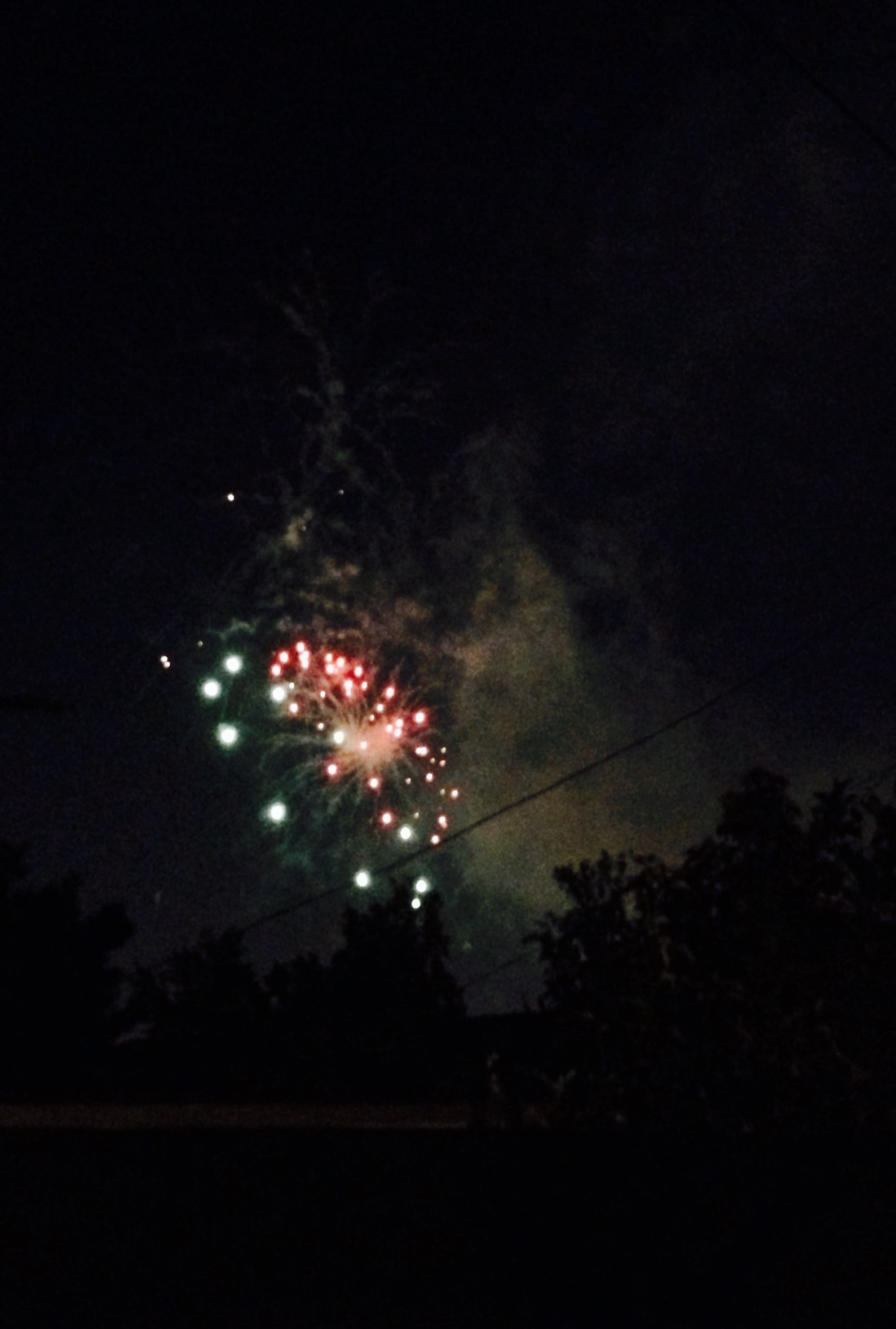 Good morning or whatever part of the day is for you. Today is Monday, July 06, 2015. The temperature is 66.1°F and the humidity is 85% at 5:01 a.m. PST (-8 GMT). Weather Underground shows sustained winds at 0 mph with gusts of 1.6 mph. It was overcast when I when I stuck my head out. No stars, no moon. Weather Underground is predicting a 0% chance of precipitation and a high of 78° (“cooler than yesterday”) today.

We had our traditional 3rd of July barbeque. A nearby school sets of fireworks one the 3rd—not the 4th—and we have friends over to watch from the backyard. This year, quite a few neighbors had illegal fireworks of the own to set off. All fireworks are illegal in the city where we live, but that doesn’t stop a lot of people. I couldn’t believe some of the stuff people were letting off—mortars and cherry bombs and Roman candles. It's actually a little scary, given the dryness of the area, but we're in an urban area. This hills around us, though, are a gigantic tinderbox.

All in all, Gremlin took it quite well. When there were people in the backyard, he was nowhere to be found. By the time the fireworks started, though, he was safely locked up in his enclosure. Later, after the school was done and the neighbors were still shooting off their own, I noticed him sleeping calming on a broad shelf in the enclosure where he often sleeps.

The next door neighbors had a drone that they sent into the fireworks by the school. I’ve been told the drone-fly violated several rules: It flew more than 200 feet about the ground, it flew over populated areas and it flew out of line of sight of the operator. They had a guy on the roof spotting it. The drone survived. And I bet he got some fantastic footage.

The critique group read the first part of “Dirt” on Thursday night and found it quite amusing. That is good.

Mr. Siduri has someone coming over this morning to do some HVAC work on the upstairs to day. There’s also electrical work that needs to be done. He’s been painted and replacing molding, having found some old termite damage behind a workbench. This is all in prep for carpeting that will be going in there in a couple of months.

That also means bringing down my library of books. I took the opportunity to catalogue them. So far I’m maybe half way done and I’ve got a Word document that’s 15 pages long. That’s scary. My New Year’s resolution (which I’ve kept) was not to buy any more books in 2015. I took a few old textbook and odds and ends to the library as donations. And I culled a lot of books some years ago before I moved in here.

But with all that going on, I’ve gotten not writing done. Here’s to settling down and doing some writing today.

Thanks for reading. Hope you and yours are all well and happy. Hope the day brings you good things. Off to write another day—

2. Review Inanna Queen of Heaven and Earth either today or tomorrow.

4. Read and review a Lovecraft story

Image Credit » image is my own

I've already thumbed my nose at it. I remained ladylike. The weekend was nuts, but fun.

So,4th of July has come and gone.Glad you enjoyed the festivities on the 3rd.So the critique group found the first part of ''Dirt'' amusing?Was that the reaction you were expecting?

Glad there were no fires started and you had a good time. That would be nice footage from the drone

Hope you get all your writing schedule done. God bless

Yes, the 4th has gone, but the firecrackers remain. Yes, I was so hoping people would find "Dirt" funny.

I'm glad there were no fires, too. I'd like to see the footage from the drone. It would be interesting.

Thanks. Things have just gotten so busy.

Sounds like a good day. I would love to see those shots from the drone of the fireworks.

Sounds like you had a fantastic weekend. I will be donating books to my local library soon, as well.

I wouldn't mind seeing pictures or watching a video captured by that drone! I bet the fireworks look amazing from that view!