Waiting for a dog to go to the toilet! 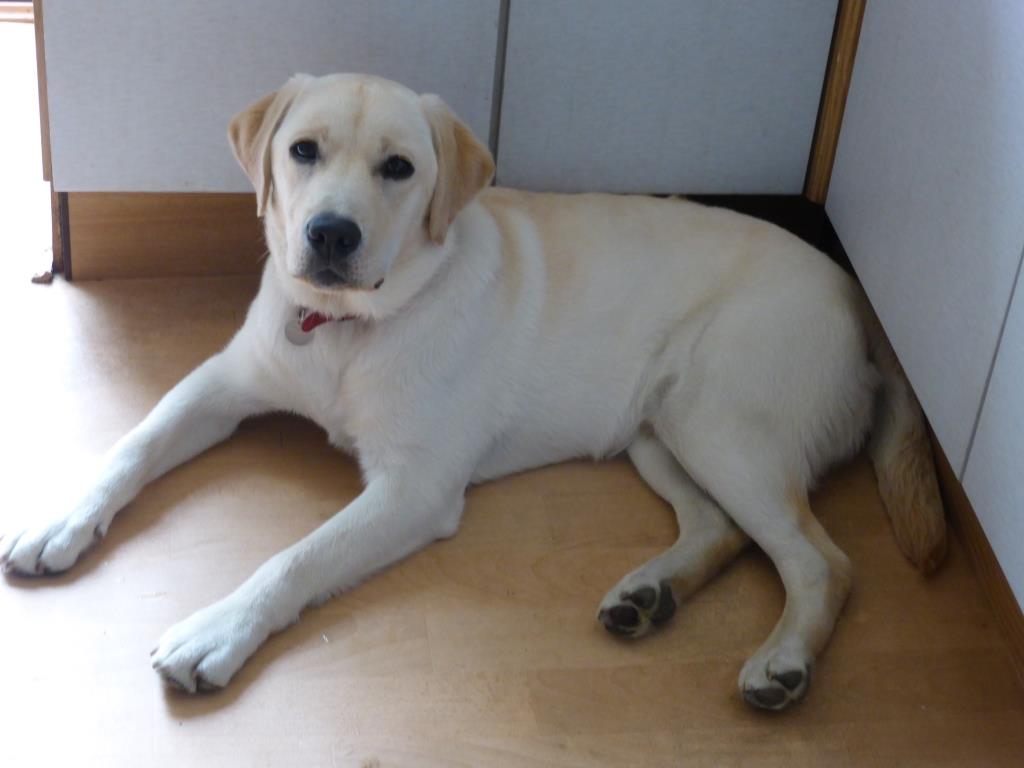 In January we became puppy socialisers for the charity ‘Dogs for the Disabled’. Our main role is to get him used to a normal family life and introduce him to plenty of experiences, along with some basic training. One of the key issues though is toileting. As a working dog he has to learn not to go to the toilet when he’s out and about on the lead, because he’s supposed to be helping a disabled person not having them clean up after him! He can go in the garden at home, or else when he’s out having fun on a ‘free run’.

At first this was easy because when he was little he would have to go almost immediately after eating. Now he’s bigger though, things take longer, and even though he went out in the garden first thing in the morning and was allowed out several more times afterwards, we would set out to go somewhere with him on the lead and he would need to stop shortly afterwards for the toilet. At first I thought this was a fluke, but recently I started to notice that it happened just about every time we went out, at all times of day. I mentioned this to my puppy coordinator and she told me it was important that this did not become a habit, and I should try to make sure he only ‘went’ when not on the lead, and if I wasn’t sure he had already been, to leave him at home. After that, if he showed the signs, I would either take him home again or else hurry him along to the park or the meadows and let him off the lead.

At first that seemed OK, but then I got suspicious. I got the distinct impression that he had worked out that if he walked for 5 or 10 minutes from home and then conveyed that he needed the toilet, it would be too late to turn back so I would hurry him to some nice place where he could play, and that now he was doing this on purpose to make me take him to his desired locations faster! He would start to pull on the lead and when I stopped (to teach him not to do that) he would then start to squat, meanwhile looking at me over his shoulder with an innocent expression as though to say ‘But I need the toilet!’ Of course every day is not the same, some days we might be going to the park for a play with his friends anyway so getting there in a bit of a rush wouldn’t matter, but other days we might be on the way to school or the shops and I couldn’t let him manipulate me like that!

Earlier this week we had a day of routine errands so I decided I would try the advice and leave him at home if he hadn't already been to the toilet. The whole day turned into a battle of wills on this point! He went out in the garden first thing, then I left him at home while I walked Big One to school. Then I took him out and walked a couple of hundred metres down the road and back until he started to do that telltale waddle (believe me I am now very familiar with the signs!) then hurried home and back to the garden. Once there of course he went off the idea and just spent time rolling in the grass and playing until I had to give up because I needed to take Little One to toddler group, so I left him at home again. After we got back at lunchtime I went through the same performance and once we got back to the garden, nothing. Same thing again just before it was time to meet Big One from school at 3:20, then again just before taking her to Brownies at 5:30 (I planned it each time so that if he did do anything, I would be able to take him out with me straight afterwards as a reward - as well as plenty of praise and treats of course).

Even though he would be struggling to squat while I was hurrying him home, and even as I was opening the gate to our garden, once I let him off the lead in the garden he seemed determined to hang on! Finally at the 5th try at 6 pm he did actually have to give in, so I was able to take him out for a nice walk in the woods before collecting Big One from Brownies at 7:00. What a palaver! I’m not about to give in though I can tell you! I just hope I don’t have to do this every day as I am heartily sick of the same stretch of road!

Ways (not) to spend a Sunday morning

This reminds me of a story I heard from a friend whose neighbour also took in puppy´s to train for the guide dogs for the blind association. One day the neighbour was out in the garden in pouring rain, giving the command to hurry up, which meant do the business, she repeated the sentence over and over again, but with little success, and then said very loudly " Oh for goodness sake will you shit" LOL. I wish you well with your training, but it does sound like buster has worked out a cunning plan.

That sounds like a lot of work for you. Maybe he's just being a stroppy teenager!

This sounds like he is trying to get his way for something and using potty to do it. I wish you luck on figuring it out

Good luck at this. He is trying to pull the wool over your eyes. I am glad you have seen through his antics. I commend you for doing this important training.

One thing I have to admire is your patience.Also it is nice of you to take up this work to help out the charity.

That is so funny, I really did laugh out loud, and yes I have felt like saying 'Just to go the F**ing toilet!'

Yes I think he's going through his teenage rebellious phase at the moment, he's 7 months old.

Toilet training dogs is alike training a toddler, takes a lot of patients