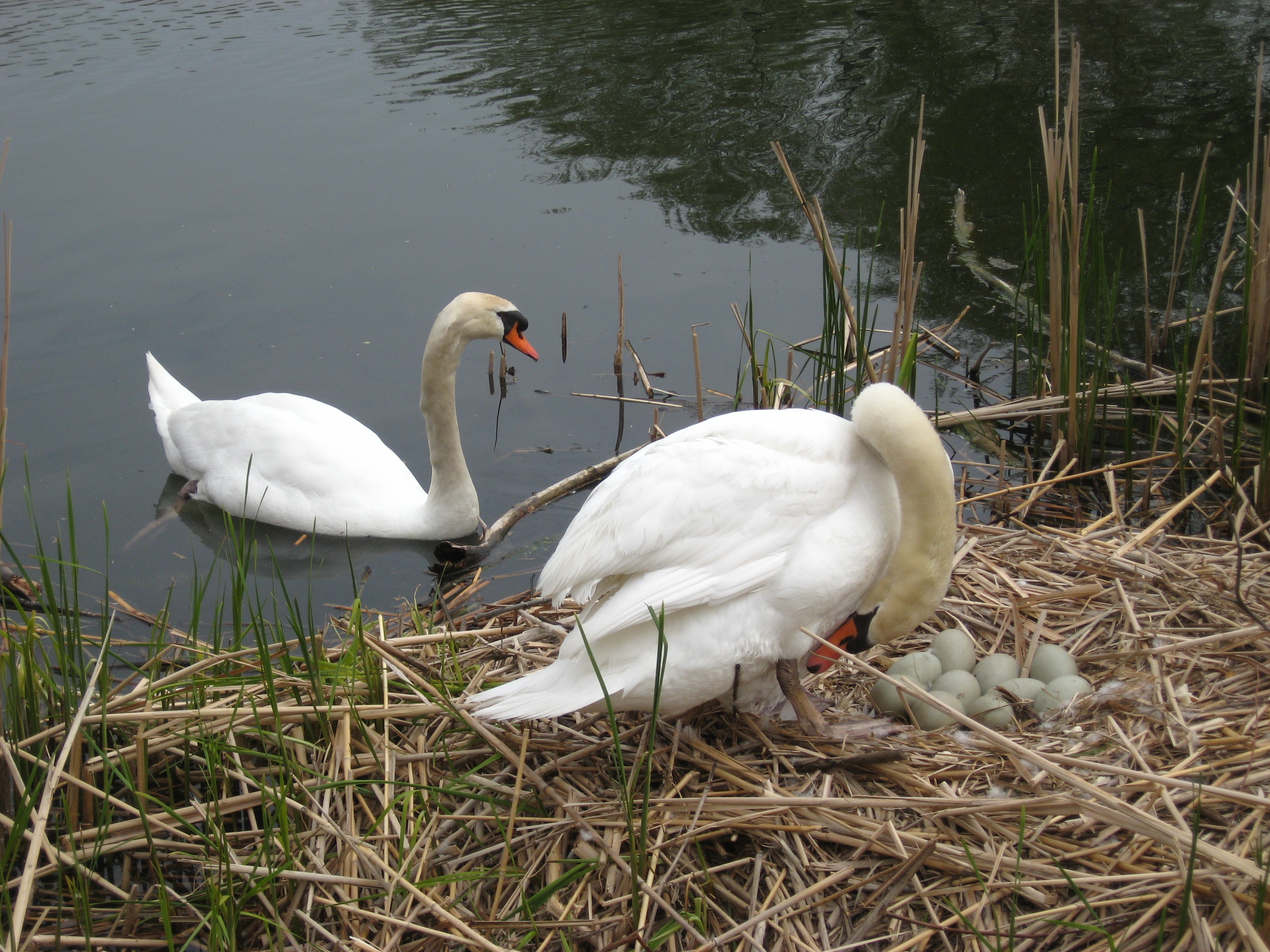 Close to where we live is a wetlands sanctuary for fish and migratory fowl. One of the benefits is that some of the inhabitants spill over into other areas, specifically a nature walk near our downtown.

For some years, we've had a pair of nesting swans that don't seem to mind attention and that have built their nest quite close to the walkway. What a treat! We're able to get a pretty close look at their nest and the eggs the female lays in the spring. At the time of this photo, the clutch eventually had 9 eggs!

Sadly, the park management only allowed one to hatch. The problem is that the mute swan is very aggressive in using food resources and space, so is a lot of competition for other wetland fowl in the area.

I've also read elsewhere that swans can be very aggressive to humans and attack them! So be careful when approaching these beautiful birds. They are called mute because they don't make honking noises while they're flying, but on land they hiss and chortle a bit.

There is a park down by my condo that was just full of water fowl. They got rather aggressive with each other and with people after a while. Part of the problem was they got used to people feeding them. If other people showed up without food, they might get attacked.

There is a wetland wildlife reserve not to far from where I live and there are many swans there. A couple of yours ago we saw a pair of swans with 15 cygnets in tow! Not sure if this was just one brood or maybe two combined.

Beautiful birds. There is a park by my home that mostly geese, ducks, and other birds visit, but there is also a few swans.

They do eat a lot so I understand controlling the population. They are very pretty

People never do get involved unless it is to destroy. Had they been scarce, would a guard be put up, or some sort of protection be provided?

It seems that birds, much like cats too, are very territorial over where their food comes from!

Wow, need a camera !! Can you believe the number of young ones they can have?

They are so graceful. I like that their theme is carried into the ballet and into stories.

They are quite large actually, and I wouldn't want to have to go up against one!

I don't know, but believe there are enough swans in the vicinity to keep the population going overall. After some research, I do believe it was sensible to not allow that many cygnets to hatch as they would eventually chase out all the other water fowl.