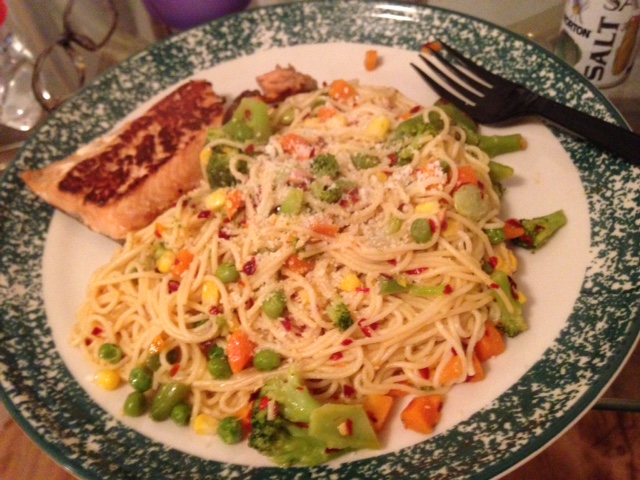 I was way too tired to write a food log for yesterday, so I'm just going to do it along with today's. This morning the scale has said I've lost a little under five pounds, but I think scales often lie so I won't trust the number for a little longer yet. However, I do think I'm fitting into clothes better. I think my butt has shrunk a little, which... isn't the place I was hoping to first lose weight, but you can't control where you begin to lose weight so I'm pretty content. I also think my stomach, my actual stomach organ, is shrinking a little because I feel like the smaller portions are actually filling me up quicker and longer than before. But other than that, I don't think there's been much of a change. Anyway, the breakdown:

Yesterday was actually my first try making noodles without a premade pasta sauce. Result turned out to be way too much olive oil and red pepper flakes, yikes. Today's I tried adding a little bit of honey to the mix. The result was... interesting. Next time I think I'll work to make the sauce a little more savory and less sweet.

Hopefully I'll be able to branch out my cooking skills a little more. Tonight I think I'll begin soaking some black beans I recently bought and I'll try cooking something with them tomorrow.