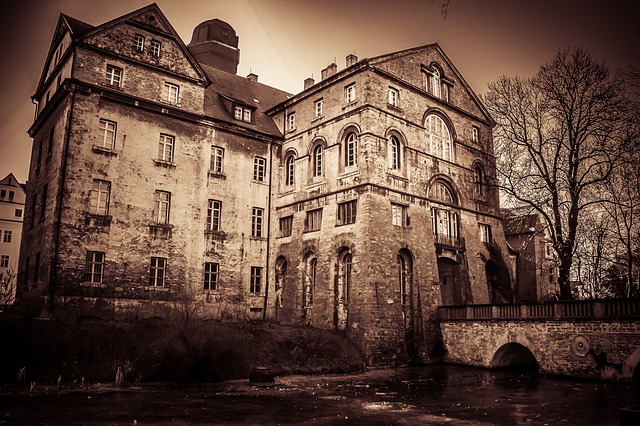 The unnamed narrator of this story is happy to hear of a haunted house in London that no one seems to be able to spend more than a night or two in. He takes his servant F—— and his dog (oh, just put a red shirt on the poor wee beastie!) and engages the house.

The owner, Mr. J——, who has only recently returned from service abroad and inherited the house, warns him that no one, not even he, is comfortable in it. Most people flee in terror after a single night. No one is quite sure what terrifies them and no one tells quite the same story. So the narrator and his servant can’t say they weren’t adequately warned.

The dog has more sense than either of the humans and begs to be let out the front door the moment the company crosses the threshold. He gets talked into staying. As soon as the humans settle in for the evening, chairs start moving of their own accord.

This may sound like slapstick, but it is in deadly earnest. It reflects the mid-19th century interest in spiritualism as well as ancient beliefs of hauntings by evil people and wronged people. But it also blathers on about “scientific” notions of the true nature of spirits. They are not supernatural per se, but are human in origin and should therefore be something one can deal with.

While I think most modern readers may lose patience before this is over, the melodrama is what got to me. Interestingly, it wasn’t until the very end, when ALL IS REVEALED that I remembered I had read this story as kid some time long ago and far away. I think most people will be happy enough giving this one a pass.

English author Edward Bulwer-Lytton was a popular novelist in his day and contributed many common phrases to everyday speech: “The pen is mightier than the sword,” “the great unwashed,” “the pursuit of the almighty dollar,” and the never-to-be-forgotten opening to his 1830 novel Paul Clifford , “It was a dark and stormy night.”

Title: “The Haunted and the Haunters” first published in Blackwood’s Edinburgh Magazine Aug. 1859

An earlier version of this review appeared on another site. It has since been removed and is no longer visible. It has been updated and expanded for its inclusion in PP.

I knew that I knew that name - the creator of "It was a dark and stormy night" - Snoopy's favourite beginning for his novel!

Yes! I read it for year before I knew there was actually a book that began with that phrase. I think Snoopy's continued with a maid screaming and a shot ringing out.

I'm pretty sure that when you read this as a kid long ago and far away, you weren't living on Tatooine in a moisture farm or being chased by Imperial stormtroopers.

Oh, so that's where that comes from! Glad to know.

IIRC, it was the next best thing. I was living in the Marshall Islands in the South Pacific (a moisture farm all by itself) and I was trying my best to avoid my stepfather. He was at least tall enough to be a storm trooper.

I haven't read the novel, and I doubt I will. It took me a long time to realize it wasn't Snoopy's invention.

It sounds like a good idea for a PP challenge. Write a short story with the opening line "It was a dark and stormy night."

And excellent idea! It doesn't have to be a full-blown short story. How about a paragraph?

Yep, ranks right up there with parodies of Felicia Whatsername's "The boy stood on the burning deck". :)

I´m grinning because the phrase " It was a dark and stormy night" brings back not only memories of the old TV series Dad´s army, but I also use it when I have my regular visitors from Yorkshire renting my villa for holidays and the 2 teenage boy´s are pestering me for real life ( if there is such a thing) ghost stories. I haven´t written much on here about my own or close family experiences of the supernatural. Maybe I should save them all up for a book?

You could do both. Give a few stories trial runs here then edit them as necessary for a book. (See if my wifi connection goes away this time...)