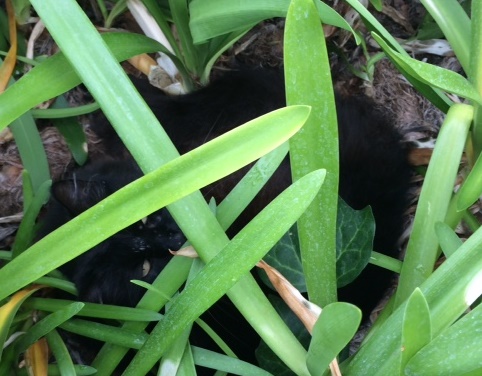 Good morning or whatever part of the day is for you. Today is Saturday June 6, 2015. The temperature is 61.9°F and the humidity is 73% at 5:46 a.m. PST (-8 GMT). Weather Underground shows sustained winds at 0.7 mph with gusts of 3.8 mph. It was overcast when I stuck my head out earlier. It’s dawning now. Still haven’t seen any stars for a while. And no rain. Weather Underground is predicting a 0% chance of precipitation and a high of 77° today.

The pic of my cat, Gremlin, hiding among the plants along the back wall in the backyard. Bet you can't spot him.

I’ve been poking and prodding the fairy tale. It’s gotten a notch or two above sucking to approaching workable. The biggest obstacle is the word count constraint—1000-1200 words. I would go on and on but I have to stop and say what I want to say in as few words as possible. Stab the exposition in the heart. Snip dialogue. I think I may have something presentable for the critique group Thursday night.

Getting the crown put on went well enough and happily without drama. It feels good, actually better than the tooth that was there. Paying for it was painful, though. Because it ended up being a root canal, the total was $1235 when I was expecting to pay roughly $650 for one tooth. Once I get this paid off, I’ll go back for tooth no. 2, and beyond that will be tooth no. 3. I’ll have an expensive mouth before this is done.

Today is my mother-in-law’s 93rd birthday. We’ll call her later today. The world sure has changed in her lifetime.

Mr. Siduri has had a headache for a couple of days. I thought it was working with the paint stripper and the paint and whatnot so I advised him to take a break for a day or two. He won’t. It’s unlike him to have headaches like this. One night a year or two ago, he sat down to dinner holding his hand over his eyes. I knew immediately it was a migraine, which he gets very seldom. I turned the light off and told him he not to eat dinner if he didn’t want to. He didn’t. I suggested a hot shower and a lie down in the dark with maybe some Tylenol. He said the next day that he didn’t know how I stood these headaches for years. There are a lot of people who get them worse than I ever did.

2. Spend an hour with Siegfried

3. Recycle an Epinions review for Examiner.

Image Credit » Image is my own

Amazing what stress does to a body, isn't it? When Mr. Siduri retired, his blood pressure didn't drop much, but his sitting heart rate dropping like a stone.

Hope Mr.Siduri's headache has gone.Did your visit to your mother-in-law on her birthday go well?

CalmGemini Kind of you to ask. It finally went away. Then I got it.

But I'm OK. Yes, our visit with my mother-in-law when well. She keeps saying she can't believe she's lasted this long.

Shudders in sympathy over the dental woes. I thank god that my medicare package pays for dental care. As to migraines, they are awful. I usually don't get them as much as I used to, but one will pop up now and then.

Any migraine is too much as far as I'm concerned. I'm happy to hear yours have decreased, Telynor . I seem to remember your getting them rather frequently and that they were nasty. The cost for the root canal—that was with insurance! I haven't had dental insurance for years. Finally got on a plan because I knew I needed work. Turned out I needed more than I thought I did.

When I first moved in with J, he really pushed me to get to the dentist regularly. At first it was rough -- for a while it was every four months, and some work done to replace fillings, but soon it was once every six months and minor work. Makes a huge difference!

I used to go fairly regularly when I had insurance. I never had too many problems. I don't like going to the dentist. But I'd like to hang on to my teeth for as long as I can, too. So, as soon as this one is paid off, back for round two.

Yes, keeping up on the dental is great. I never knew how much of a change it would make in my quality of life, but it certainly did.