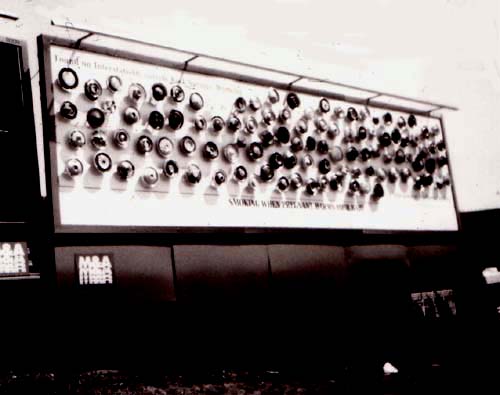 The craft of the billboard poster has rarely been taken seriously. The butt of a thousand gags in cartoons and comedy sketches, this humble servant of the advertising trade went quietly about his business, climbing his ladder with paste bucket and brush in hand, and the next segment of his poster rolled up and tucked firmly under his arm.

I snapped the billboard in the photo while I was taking in the atmosphere at the football village in Newcastle, during the Euro 96 tournament. There are over 100 hubcaps on the board, and the accompanying text tells us that they were found on Interstate 80, outside Rock Springs, Wyoming.

So what exactly is the billboard advertising?

The clue lies at the foot of the structure. A government health warning tells us that the billboard is promoting a brand of cigarette.

I’d like to have seen the look on the poster’s face when he turned up for work and a load of hubcaps were dumped by his ladder.

There are some pretty impressive 3D billboards out there – have a look online.

Image Credit » Image: My own

How Regularly Do You Fill Your Tank?

Some of the bill boards over here have lights but I have not seen a 3d poster.

Well there are no 3D billboards here,I surfed the internet.There were varieties of billboards to look at online.