Animal Rescue: Not in My Job Description! 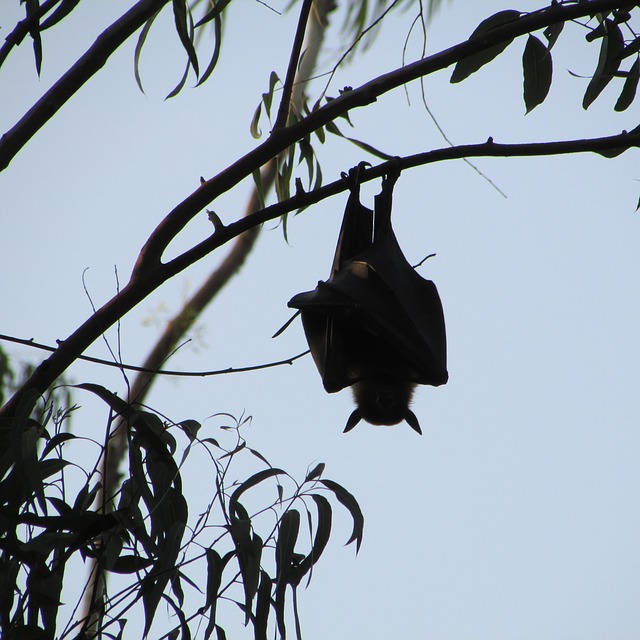 When I was much younger I worked the overnight shift at a veterans hospital at the western end of Montreal. When the weather started to turn cold in the fall we had a problem with bats flying into the warm air exhaust from the ventilation system, looking for a place to shelter.

Once the tiny creatures got into the air ducts they would fly down too deep, and lose track of where they were at. I guess echolocation doesn't work too well in those ducts! Periodically at night, we would hear strange scratching noises in the ceiling, and then we'd see a little claw trying to find its way free. The bats would exit the ducts through the air vents, but then get caught above the drop ceiling. It would take a while for a bat to squeeze its way out, between the metal slats that made up the ceiling.

Once the little guys got loose they would want to fly, but as the hospital was hermetically sealed they couldn't get back outside. There was space to move now, but nowhere to go. The poor things would panic – and of course, that generally set off panic on the part of the humans who witnessed the escape attempt!

When Bats Got Loose on the Ward

Each floor of the hospital consisted of two care units, each again composed of two wings. One of these was a huge dormitory-style ward room that had sixteen beds. There was no door to this room, no way to close it off against the bat that was on the loose. The best we could do was close connecting doors to the bathrooms and utility rooms. We would also close the heavy fire doors at the entrance to the ward.

But we still had to catch the bat!

Once we managed to catch a bat with a bed sheet spread out between me and my workmate, and held up like a net. He then grabbed the sheet up in a bundle, and took the elevator downstairs in order to set it free outside. I was glad to be working with someone who was quick enough to “bag” the bat and get it to safety. I don't think I'd have been fast enough on my own!

Another time the bat managed to find its way into an open stairwell, and disappeared downwards. But sadly, there were times when one of the staff would kill the bat. One time I remember, one of my partners smacked the poor bat with a cafeteria tray. He was fed up chasing it around with a sheet, and he'd had enough of the poor nurse's worried cries. (You see, she had barricaded herself in the medication room and kept calling to ask if it was safe to come out yet!)

It was sad to see the bat die, but I guess it went the way of so many things that belong in nature. We can live side by side with these creatures as long as they stay away from our homes, but as soon as they “invade” our territory, it's curtains for them. Somebody forgot to mention that we all used to coexist in the wild, and most probably we've encroached on the bats' territory....

I think I would actually be afraid of the bats! But I am glad you were able to get them out safely, and I am sorry some had to be killed. :-/

A small percent of bats may be carriers of rabies. If so their bite will be dangerous.Sometimes in their panic they may bite or claw at us. it is their saliva that infects us.There are some diseases transmitted by bats . So it is better to be cautious.

My daughter told me about visiting someone in hospital and a bat getting in and a visitor killing it. I was so mad. I hate to see that. Many years ago, I found a baby bat. It must have fallen off its mother but unfortunately, it died. That sheet was a good method of catching the bats.

Not to worry: we never got anywhere near that close to these bats. Most of what we did was to corral them in a space so we could let them out a window in one of the few rooms that had windows we could open. Otherwise, as I said, they tended to fly down the stairwells....

Bats are protected in the UK...although the bat in the picture is a fruit-bat big enough to disarm tray wielding nurses...lol

I am glad you were able to catch many of them.I feel we have invaded their territory. Also they are helpful animals as they eat mosquitoes.

Ruby3881 What a tale! I tend to think of bats as creatures I may see out in the woods.

As I tell the many legged ones that try to invade my home: I'm fine with you as long as I don't see you. Keep all your legs out of my sight and you will live a full and happy life - so long as you can stand regular dousing with sweet chestnut spray as I practice preventative maintenance. Otherwise, my husband's size 10s await...or the inside of the vacuum if I get there first.

My goodness...what a great story. I need to dig around and see if I can find anything in my past that is the interesting.

I have never killed a bat. If I got one in my home I would try as hard as I could to free it. My friend got one in her sink and I went over to her house with a pair of ov gloves and picked it out and took it outside to set it free. They can be kind of scary with their sharp teeth. I would have been sad to see or hear someone killing them.

The other day I saw a bird on the floor when I was grocery shopping. It's not the first time I've seen a bird in a super market. I would think it your bats probably cause more commotion, since patients are already stressed enough without a bat on the loose.

Oh my, that nurse would have had company in the medication room if I had been there! Bats are just one of those critters I am not at all fond of, no matter their good points.

I would have been amused! "All creatures great and small," and all that...

That's exactly what I thought too! But apparently there are a good many bats in the city.

Sad about the bat. I even save slugs. But I agree, our home territory must be treated as sacrosanct.