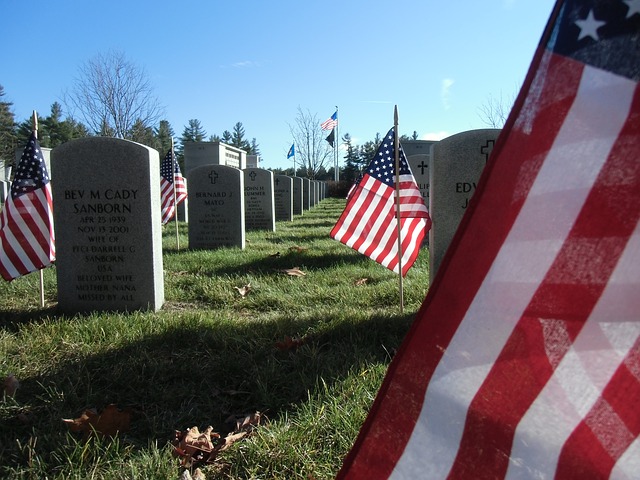 Good morning or whatever part of the day is for you. Today is Monday May 25, 2015, Memorial Day. The temperature is 59.3°F and the humidity is 84% at 4:13 a.m. PST (-8 GMT). Weather Underground shows sustained winds at 0.7 with gusts of 2.2 mph. It was mostly cloudy when I stuck my head with patches of blue but no stars. Weather Underground is predicting a 0% chance of precipitation and a high of 74° today.

Today is the Memorial Day in the U.S., that is, a day set aside to commemorate the sacrifice of those who have given their lives in the service of the country. It grew out of a holiday designed as part of reconciliation after the Civil War which remains to this day the war which caused the greatest number of casualties in U.S. history.

I thought I’d repost something I wrote at Bubblews last year, slightly rewritten:

Today we observe Memorial Day in the United States, a day set aside to commemorate those who have lost their lives in service to the country and to honor active and retired military members. It goes back to the ceremonies commemorating those fallen in the Civil War, which were then called “Decoration Day.” It’s believed the end of May was chosen because flowers used to decorate the graves would be in bloom in all parts of the country.

Decoration Day was significant because it was nation-wide and the graves of soldiers from both sides were honored. After the First World War, Decoration Day was expanded to honor those who had died in all wars. Later in the century, the name was changed to “Memorial Day,” and the meaning expanded again to honor all military.

When my brother and I were small, our grandmother was in the habit of saying things in front of us that perhaps she shouldn’t have. These were never malicious things, but they were private things about other people that might be embarrassing to them. I look back on them now with fond amusement and wish she were here so I could tease her about them.

Between the two world wars, she worked as a nurse. She got along with almost everyone, she told me, but there were some people whom she couldn’t please if she’d stood on her head. In my child’s mind, I tried to imagine this large lady wearing a nurse’s uniform and standing on her head.

One day when I was perhaps 7, she pointed to a picture hanging on the wall of a young man in uniform. I don’t remember what he looked like or what uniform he wore, but judging by everyone’s age, he must have served in World War 2.

“That’s my little brother,” she said. “He went to war and never came back.”

It was the only time I can recall that she ever mentioned her brother. I remember her sisters who were named after gemstones.

“What happened?” I asked.

On the other side of my family, my mother’s father was the oldest of eight children. He, like his youngest brother, was drafted into World War 2. Unlike the youngest brother, he made it home. After the war, there were TV programs featuring people who were looking for their families. My mother once said her father watched the shows religiously, just knowing he would find his little brother. He never did. He himself died in the mid-1950s following the removal of a lung for cancer.

The two young men, great-uncles from two sides of my family, never met. It was a big war. Had they met, though, they would have been enemies. And that would have been all the sadder.

1. First, spend an hour with Siegfried

2. Goal of eight Examiner reviews before June 2. Four down, four to go. Finish that half review today.

Thank you for letting people know it isn't ab0ut camping out or cooking out or the first day the pool is opened. Too many people don't consider the reason behind this day. I'm sorry about your uncle, it is one thing if a solider dies, but another not knowing what happened. I have a friend and her finance was supposedly killed in Vietnam, but the family doesn't believe the body was his. (The death was when this helicopter was hit and the remains were burned in the crash) The family said the body was too short and the tooth they found? This man had that tooth removed before going into service. So they are hoping to find out who really is buried in this mans grave and what happened to this man.

I was more fortunate. My father and 2 uncles also were in WWII and all made it back. Of course now they all have passed away, but I have my dad's hat along with a drawing of himself that he traded a pack of cigarettes to a Frenchman to draw this picture.

Thanks for your nice note. Re: your friend's fiancé: This is a long time to live with uncertainty. I think after a while the people in my family just accepted that their brothers were not coming back, even if they didn't know what happened.

The picture is a nice memento of your dad.

I hate wars, anyway maybe your grandmother trust you a lot that's why she's saying things with you and with your brother. It is just so sad that families where being tear apart by those kinds of wars. When I was young I thought if you missed someone in your life you can see them still before you die... but I guess God has a different plan.

My grandmother's little brother died (I think) in World War II as a young man. That was the only time she ever spoke of him to me. I don't even know his name. He would have been my great uncle on my father's side.

The other man was my great uncle on my mother's side of the family. He fought on the opposing side of the war. He was my grandfather's little brother. He also died as a young man in World War 2.

Did that make it any clearer?

HeheheheI think it is clearer now. thank you. I think you have so many relatives who fight for the freedom and justice. God bless you all.

Today's recurring theme at Persona Paper: "Memorial Day is not merely a day for cookouts, movie-going, or going shopping for bargains." You touch on it well here, as did several others.

I wish it weren't necessary. I wish we could all stay home and have barbecues and enjoy a three day weekend every once in a while, but that doesn't seem to be the case.

Thanks. I don't think there's anything wrong with barbecues, movie-going or shopping. Those are all part of life.

Sorry to read that about your uncle.

Thanks. It was a long time ago, before I was born. Thanks for your note just the same.