What the Heck Is on My Face? 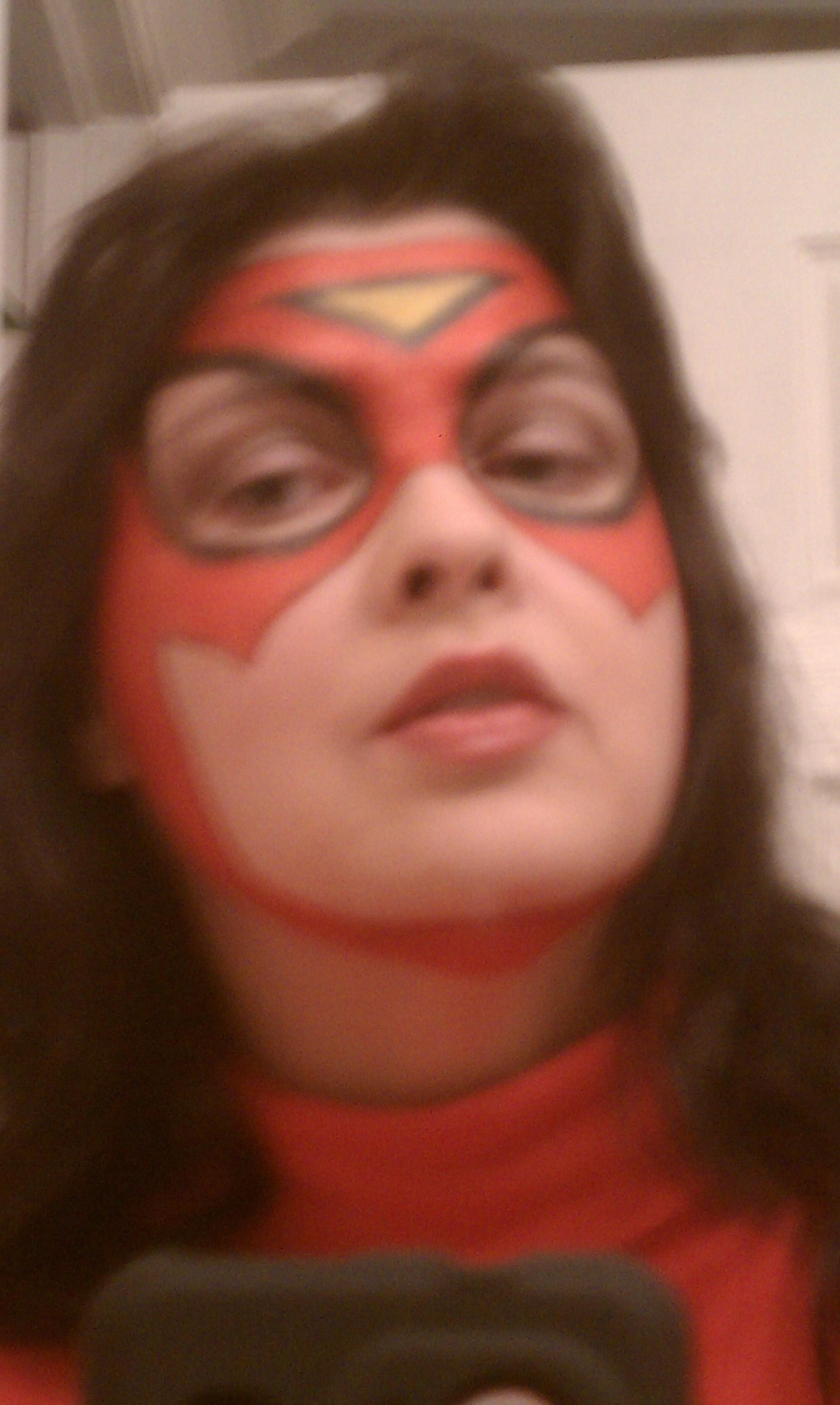 With over 5,000 page views, I have had possibly hundreds of readers, by now, and I am willing to bet the overwhelming majority of you have wondered what is going on in my profile picture. The other small percentage are comic book nerds, like me, who recognize the character Spider-Woman. I took this selfie in my bathroom, before heading out to a costume party that was fairly well-attended by other nerds.

The Marvel Comics character Spider-Woman was not Spider-Man's sister or even his partner (they don't do things like DC Comics). She had her own life and even her own book, which ran for 50 issues exactly in the 1980s and ended with her death. Yep, she died. But apparently, she's around again--it's hard to keep really good characters dead.

Actually, I am more of a DC person, and my all-time favorite is Wonder Woman, but for this party I wanted to go a little off the beaten path. My natural look and hairstyle is a fit for Wonder Woman, but also for Jessica Drew, the original Spider-Woman (at some point there was a strawberry-blonde chick who wore a blue-and-white costume, but the original Spider-Woman was clad in red and black, with a few yellow markings (you can see one on my forehead).

So what IS on my face, exactly? Well, Spider-Woman's mask is apparently made of that skin-tight, non-wrinkling, stretchy, weightless wonder fabric that does not exist, so since I have an art degree and a pretty well-stocked makeup stand, I was happy to achieve the same effect with black eyeliner, bright yellow eye shadow and transfer-proof red lipstick. My face stayed a bit reddish after I took the stuff off, but overall I think I achieved a good look!

Tuesday Is My Getting-Stuff-Done Day

I figured that it was a cartoon character. I thought it was Wonder Woman.

LIPSTICK? Oh, you are brave.

I had been thinking you were going to a costume party as a cartoon character.

Neat! For some reason I remember attending a fancy dress party as a kid dressed as a Star Trek red shirt in black trousers and boots and a red top with a foil and cardboard Star Trek logo pinned on. I was never into Wonder Woman and especially not the Spider (Person) franchise. That makeup looks cool though.

She doesn't wear a mask, but she has a cool golden tiara.

LOL, yep. It was the perfect shade, and it went on very easily. I also wanted the transfer-proof kind so I didn't have to worry about smearing. I kinda expected it might stain my skin a little, but it was worth it.

Oh, no--a red shirt! They're the first to die (unless you were Scotty or Yeoman Rand).

Yeah, I know. Says a lot about how I viewed myself back then.