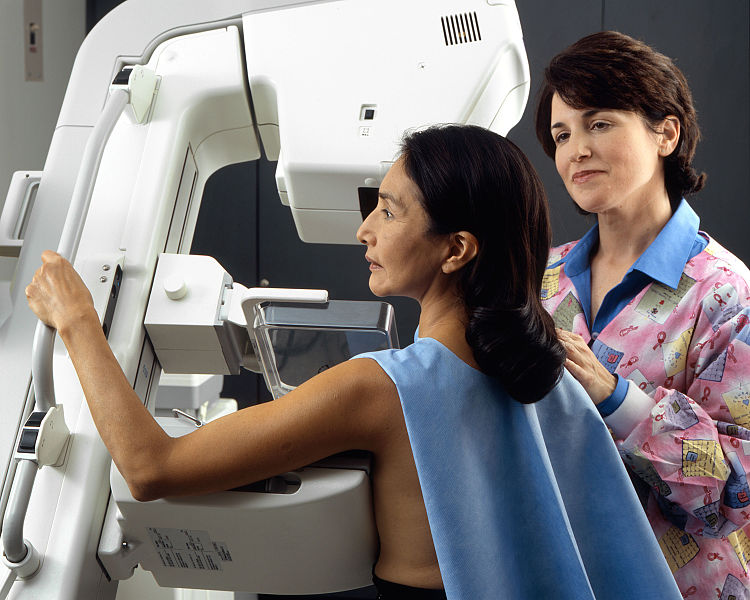 Hey, ladies, we all know that mammograms should be part of our regular medical screening process. The American Cancer Society has recommended that women have a "baseline" mammogram at age 40, and then have follow-up mammograms every three to five years after that, in addition to regular monthly self-examinations and manual exams by your physician. The mammogram is an important tool in the early detection of breast cancer. Even though nobody wants to think about having cancer, the earlier a tumor is detected, the earlier treatment can begin, and chances for survival are vastly improved with early treatment.

So, why is it like pulling teeth to get women to schedule a mammogram? The expense is frequently covered in full by insurance or Medicaid, and unless you live in an isolated area, there's a facility near you that provides the service. Some women may have "I'd rather not know" syndrome, cleverly disguised as "too busy" (try to explain that one later if you end up sick), but most likely the fear of "compression"-in other words, the way the technician has to squeeze your breast over the plate to get it, well, thin enough to get a good image. Some of you have experienced this, and some may have heard horror stories, but let me assure you, the experience varies widely among women.

There's a new development in mammogram technology called "digital screening mammography" (DSM). I read about DSM in the health newsletter from my local hospital, and it was described as an improvement on the old-fashioned method in several different ways, from using less radiation all the way down to "equipment that is warmer to the skin", but what might jump out at a skittish female were the words "improved patient comfort with less compression in most cases". Faster, more accurate results in fewer visits with (possibly) less compression? Sign me up, I called and said, making an appointment for a few days' hence.

Now I will state that I am a mammogram veteran: When I turned 30, I decided I might as well have a baseline mammogram (that is, a first mammogram, which is your "baseline" with which later scans can be compared to note any changes) because I hadn't had any children (not breeding young is a risk factor for breast cancer), but my Ob-Gyn said it wasn't necessary until I was older--at least 35, she said. So, I held off at the time. However, about a year later, she found a funny mass while examining my breasts, and I don't mean funny ha-ha, so I was forthwith scheduled for a mammogram (the old kind).

The "old kind" consisted of entering a small, dimly-lit room and getting my breast efficiently smooshed between a couple of metal plates by a kind lady in a lead apron who scooted behind a radiation shield to take each "shot", of which there were quite a few (each breast must be imaged straight on and from the side; think horizontal smooshes and vertical smooshes). The thing that struck me most about the procedure was how matter-of-factly the woman handled my breast, positioning it deftly on the plate, and how quickly I became used to it as no big deal. I think it reduces the mental discomfort of having a 'private' body part examined when it is treated with no special notice-I might as well have been getting an arm x-rayed. So, if a few of you are reluctant to get a mammogram out of modesty, don't let that stop you, because really, it becomes a non-issue very quickly.

When I went in for the DSM, the small, quiet, dimly-lit room was the same and the friendly, efficient, boob-handling technician was the same, but there were a few improvements, the most immediately noticeable of which was the different equipment: instead of the metal plates, my breast was compressed with a plate made of Lucite or some such see-through material. On the one hand, it's awfully weird to look down on your compressed breast, looking way bigger than you've ever seen it, but on the other, it doesn't feel as cold to the touch as the metal plates (the room is thoughtfully kept comfortably warm, as well).

Another difference I noted and asked the technician about was her lack of a lead apron. Although she does take the image from behind a radiation shield because she takes these images all the time, she did confirm that DSM uses less radiation than the old style mammogram. In a follow-up phone call I placed to the hospital's radiology department, a technician did confirm this, although they still would not recommend having the scan if there is a chance you are pregnant, so when you go to have your exam, it will be handy if you know the date of your last period. Additional shielding is available and can certainly be provided if you want, according to the tech.

The third big improvement in the patient experience is the time element. Because the old way consisted of basically taking x-rays, which had to be developed, it was necessary to take many "shots" to be sure at least a few good images came out, much like taking photographs with a film camera. If the images didn't come out clearly enough, you might have to actually go back to have another series of images taken (more compression, more radiation, and more of your time), or be scheduled for another procedure. In my case, I had to return for an ultrasound exam after the original, old-style mammogram, because they could not be sure from the mammogram alone what the mass was that my doctor had found. It turned out to be simply a clump of fatty tissue (never been so happy to have fatty tissue, I must say).

With the DSM, however, the images come up on the monitor then and there, so as with a digital camera, it can be seen whether each image is good, cutting down on the number of images needed, so less time, less radiation (which is lower, anyway), and--say it loud, girls--less SMOOSHING! Of course, the main advantage of DSM is the improvement in analyzing the image, itself. Because the image is digitized, it can be electronically enhanced and manipulated, allowing the radiologist to zoom in on a particular area or to view the images from different angles. In addition, there is a computer-aided diagnosis component that reads the image electronically. All this means it's more likely the diagnosis will be more accurate the first time with no need for further testing.

Another way that time is saved, according to the literature, is that DSM results are returned more quickly, as well. Considering that my results for the first mammogram were "come back for an ultrasound", I would say that yes, it definitely took more time. As for the digital mammogram, I had a letter in two weeks stating all was well. I'm sure my insurance company was pleased.

One more improvement noted by the article was that DSM is "better for implants, dense or fibrocystic breasts and smaller breasts", so if any of these issues has been a problem for you in the past, DSM should be considered as an option.

So, digital screening mammography is a noticeable improvement over traditional mammograms, which weren't that bad to begin with. There is still compression involved, but it is really just more weird than painful, and the pressure only lasts long enough for each image (about 15-20 seconds). Ladies, you can take it! Even if you don't have access to the newer digital technology, it's still certainly worth getting your mammograms as recommended. The old-style scans are quite effective at detecting any irregularities early, and early detection is your best defense. And if there's nothing wrong, which is the most likely result, it certainly is nice to have the peace of mind of knowing for sure!

Photograph by Rhoda Baer for the National Cancer Institute

Looking Forward to the Return of the NBC Television Show Hannibal

Got My Payment from Persona Paper!

I suppose I'm due for another one. I see my doctor for physical this month. I don't want her to find anything back.

I also had fatty lumps in my breast so had to have a mammogram earlier than is usual. The first one was so painful I had tears running down my cheeks. My next one ( done here in Spain) didn´t hurt half as much as less compression was used, and my sister tells me that´s the new way of doing it. A few years ago I saw on Spanish news that a new method is being trialed. With this you lay on a table face down with your boobs hanging through holes, and the x-rays are taken from below. No squeezing at all and apparently clearer images.

Very good article. I can confirm that modesty is not an issue, there was no problem and the smooshing, in my case, was not painful, just pressure.

My goodness. That's innovative! I presume the whole table would have a lead shield in it. so no problems with leaky radiation!

Men just have no idea what we have to go through, do they? I wish you good luck!

Oh, you poor dear! I guess the Spanish one was DSM, then--I didn't have as much compression with that as I did the first time, although it wasn't quite that painful for me. I'll bet the "boob table" looks pretty funny, with holes there. Very different from getting them smooshed, I'd say!

Thank you! It was just pressure for me, too. My sister, who has smaller breasts, said that it was more painful for her. At first that seemed counterintuitive, as I figured larger boobs have to smooshed more to get 'em spread thin enough, but she said when you don't have a lot there to start with, they have to be pretty aggressive with the compression just to get enough on the plate to see! But regardless of breast size, I know the digital version uses less compression, and that's good for everybody.

I never thought of that, but suppose you are right, unless the scanning method is radically different too. All I could think of when I watched it was No more squashed flat painful procedures for me.

I´m no wimp, but it really did hurt so much I was also standing on my tip toes, and then just as the pictures were going to be taken a doctor came in the room and started chatting with the radiologist. It only held her up for a few seconds, or maybe a minute, but I felt like shouting at her to press the bloody button. As for the boob table, anything has to be an improvement, but I hope the tables come with adjustable legs LOL

My response to this is way too extensive. I wrote an article about my own experiences. http://www.personapaper.com/article/31476-my-baseline-mammogram-and-the-ensuing-nightmare

The table is pretty tall, as it has a lot of equipment underneath it. They had a tiny set of "stairs" for me to use to get onto it.