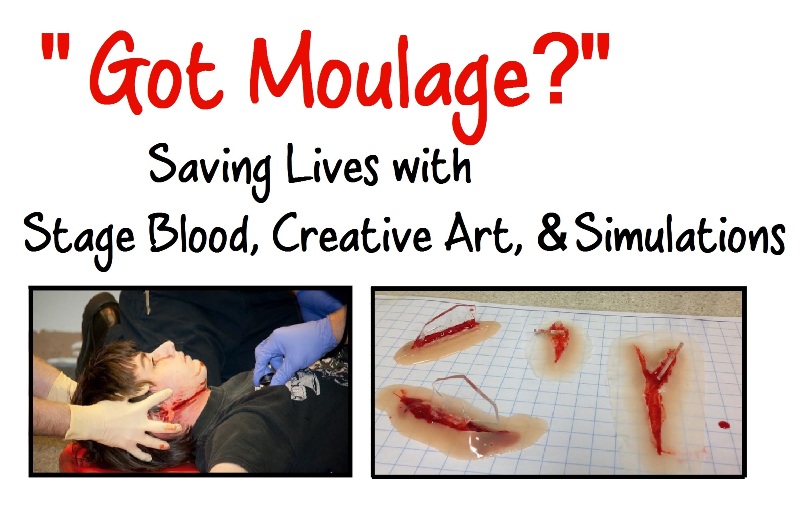 Ever wondered how actors achieve realistic-looking blood , guts and gore? Or how first responders train for different scenarios they might encounter in their daily roles? The answer is with the help of role playing volunteers and moulage. The word ‘moulage’ comes from French and has come to mean modeling in latex, wax or makeup to mimic injuries. Wax dummies with depictions of injuries or diseases were first used in the late 16th century in teaching hospitals, and are still in use in some medical schools today to show students what rare diseases look like.

Skilled moulage artists, and the volunteers they make up so realistically, can help hospitals training for a major incident, forces medics before deployment and first responders who would turn out in reaction to a local disaster such as a tornado or earthquake. They make up the volunteers playing the roles of casualties to mimic everything from bumps and bruises to broken bones and shrapnel wounds, depending on the scenario.

Some moulage artists, like Taylor Wilmering, not only decorate the role players but also take part in the role play themselves. Taylor's website and Flickr album show the depth of her work, while her degree in International and Cultural Studies informs her current work with the National Guard as a role player and moulage makeup specialist.

At present, Taylor undertakes an average of one role-playing major disaster simulation a month, often playing non-English-speaking characters. She speaks Spanish and Arabic plus being able to converse in American Sign Language too. She also contributes her knowledge to the creation of other people's moulaged injuries. Those benefiting from training in these simulations range from school age community groups training to be CERT responders to professionals in the military who will go on to use the skills they learn on deployment in warzones.

Taylor is also an author, with her book No Safe Place available on Amazon, Goodreads and Smashwords. She has used her knowledge in this book too, which should come as no surprise to anyone who reads her website and can see the way her interests mesh together so well.

If all this sounds interesting, why not contact her for more information? She’ll be happy to hear from you whether you want to use her skills or find out more about joining the people who volunteer for these events. An idea of how much outlay is involved in becoming a moulage makeup artist can be gained from Taylor’s GoFundMe page. It’s not a cheap undertaking but it is a very worthwhile and necessary role. Many of the groups Taylor works with are volunteers, and she has to buy most of her own supplies. I’ve worked with similar groups here in the UK, acting as a model for the Red Cross skin camouflage trainees who help people with scarring and skin disorders. They too have to buy their own kit, and often find themselves deployed to the aftermath of terrorism, wars and natural disasters to help victims rebuild their lives.

Heroes of Change Organization Incorporated, voluntary assistance to the needy

That was a really interesting article. Someone has really found a way to use their skills to help others!

That is good they are able to do this.

This article truly touch my interest. I am not aware of this. Thanks for sharing.