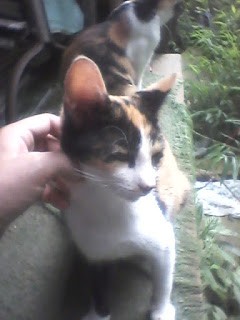 (An earlier version of this article appeared at Bubblews.com on February 11, 2014; it has since been removed.)

I've written several articles in the form of hypothetical conversations with cats. Some were serious discussions of cat care and how different cats react to various things humans do, and some, like this one, were just goofy. There is in fact a holiday called "Answer Your Cats' Questions Day." It's supposed to be observed on January 22. The cats are the resident cat family at the Cat Sanctuary; I'm sure that Ivy's first question and final comment are accurately translated from her communicative behavior but about the other questions I can't say...

Ivy: Do we have any more of those little flat tins of fish?

PK: No. You ate the last ones last night.

PK: In your great-grandmother's time, all the cats who lived here had those treats for dinner almost every night, and had kibble for breakfast, because our human friends bought treats for them. But now the treats cost twice as much as they used to, and what our human friends buy for you is kibble.

Heather: Why do the treats cost twice as much?

PK: They come from far away from here. Some poor laborers had to mix the fish scraps, meat scraps, and grain meal and can them in little flat tins. Other humans had to give the laborers money to do this. A few years ago, some humans called Congress made them give the laborers more money. After that the cost of almost every kind of food has been higher. Lots of things cost twice as much as they used to.

Irene: So the laborers get twice as much money now?

PK: Not even close. The humans called manufacturers have other ways to spend the extra money. They have to pay for more regulation these days. And of course they keep more money for themselves every year. For the humans who work in corporations, earning only as much money this year as they earned last year is a terrible embarrassment.

Ivy: Do all those other humans get more money when our friends buy more treats?

Heather: Humans like to make things complicated, don't they? Would we get more treats if the laborers, the manufacturers, and the Congress asked for only the same amount of money?

Heather: And then the laborers, the manufacturers, and the Congress would get more money?

PK: Probably they would.

Ivy: Are those other humans stupid?

PK: I think it's more that they're greedy...but yes, I suppose they are. Every time the minimum wage goes up, the laborers act as if they thought they were better off because they were getting more money. Then after a year or two the cost of things goes up and the laborers have to do without more things than they did before. But all the costs don't change at once, so the laborers don't seem to notice or learn.

Irene: Where do you and our other human friends fit into this? Are you like laborers? Do you get more money?

PK: No. People who work directly for their customers don't get minimum wages. We have to do without even more things than the laborers. This is considered fair because no one else is telling us what to do.

Heather: Well, have you got any chicken?

Ivy: Then go in and bake us some corn pone, already!

Why Irene Should Not Have Kittens

ROFLMAO I missed this at Bubblews. I love this! I love cats. I would have a dozen, if I weren't so allergic. You definitely reminded me of what I love most about them and the lessons we can learn in interaction from our furry friends.

they'd probably ask for opposable thumbs and the secret of fire

haha, this sounds like the things the stray cats here will say too. I always think that they treat us like their servants.

Heather's extra toes look like opposable thumbs, but the tendons don't seem to have developed enough to give her much use of them. Maybe that's a good thing though...during the Big Freeze, when they had access to the kitchen and wood stove, the cats definitely seemed interested in fire!

Fantastic! One of the funniest pieces that I have ever read :)