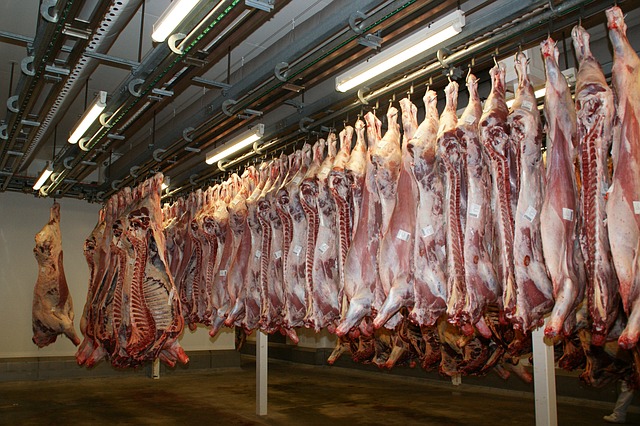 “Thousands of people who say they love animals sit down once or twice a day to enjoy the flesh of creatures who have been utterly deprived of everything that could make their lives worth living and who endured the awful suffering and the terror of the abattoirs.” Jane Goodall

Not many humans would venture into a slaughterhouse these days. Such a visit would be of the gruesome kind. The United States Department of Agriculture is quite lacking in its ability to reduce the cruel slaughter practices that are alive and well today.

Undercover video exposes cruel slaughter practices time and time again, however not many humans will watch that brutality on video either. Far too many humans turn a blind eye to the torture these innocent creatures must endure.

People are mistaken if they believe that eating the flesh of slaughtered animals does not implicate them in the violence.

"The vegetarian manner of living, by it's purely physical effect on the human temperament, would most beneficially influence the lot of mankind." Albert Einstein.

Menchie's Frozen Yogurt is a Treat!

So, let me get this straight, we have animals that are raised solely to be slaughtered for the meat to added to our food supply and you are wanting me to be worried about how they die. Well, I have news for you it would be far more cruel if they were still alive before they were processed into edible cuts of meat.

I must admit I consume eat and I don't have any intention of becoming a vegetarian, but I despise those commit acts of cruelty towards animals. I saw a video filmed with a hidden camera in a slaughterhouse from Belgium and I was appaled by the horrible manner in which those poor creatures were killed.

You are absolutely right and correct. Am I a vegetarian ? No ! To my shame I am not, I have tried and have always lapsed. I have friends who are and I admire them,as I do you. I despise the flippant comment you have recieved. I wonder if there has ever been a vegetarian political party ? Cheap and flippant comment.

Einstein was a great scientist but he wasn't a biologist. The human race evolved as opportunistic omnivores - we ate anything and everything that didn't eat us first. The vegetarian attempt to claim the moral high ground is misguided. A vegetarian diet is not necessarily healthier than an omnivorous diet. Read this: http://goo.gl/NQjxj8

Sadly, many are still alive while being processed. http://www.dailymail.co.uk/news/article-2590327/Slaughterhouse-horrors-Florida-man-charged-felony-animal-cruelty-charges-investigation-reveals-torture-animals-unlicensed-slaughterhouse.html

Not taking the moral high ground. My husband and son are carnivores, and no way am I going to change that and I do not intend to. Brutal treatment of innocent creatures does not bode well for the human psyche, and that is well played out every single day. I did not say a vegetarian diet is healthier than any other diet. However, there are articles galore that tout the benefits of a variety of diets. One has to read many, make a decision, and choose the one that works for their physical and mental health.

Illegal activity happens everywhere, but it is not the norm in the businesses that process the meat for our food supply.

Ah - so your argument is against cruelty? I can only agree wholeheartedly with you there but it's a pity that some (not you) vegetarians use the slaughter of animals for food as a reason to be a vegetarian. That argument is a red herring - there are laws governing the operation of abattoirs. They just need to be enforced.

For several years our family raised cattle and pigs for meat on a small scale. It was certainly a learning process that has made me much more conscious of where our meat comes from and wanting to honor the animals that feed us (using as much of an animal as possible, not just the "prime cuts", trying to ensure they have a cruelty-free life as much as possible.) To this day I still try to support small farms and those who promote more humane animal husbandry practices, even if it means spending more money on food. I can't always be perfect, but I try to do what I can.

Of course, I also saw first hand how animals can be cruel and brutal to each other even when given free range and exceptionally good care.