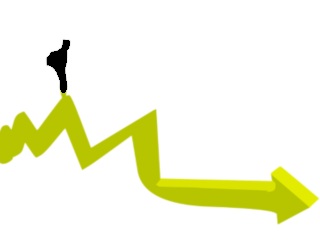 Watching my Google Adsense stats is painful, but I've ignored them for a few years and was ready to get round to doing something about my wrecked empire, so it was lovely to see the return of a little bit of green font on the latest stats. The last few days have shown only red fonts (which means earnings are down)

At the end of 19 February 2015 my Google Dashboard is showing:

So, not great still - but a nice bit of those green shoots of recovery, if only for one day. I am finally tackling a domain I never really started at all, it's been languishing since I bought it in about 2007/2008, I've had a couple of attempts to do something with that one in the past and failed, when I suddenly had a genius idea and wish I'd thought of it from the start, so I've been putting in some 10 hour days writing up a whole load of website content. I've barely had time to think about food or eating really.

So - although the Adsense income is still at the "less than a 5 year old's pocket money" level, the stats are at least showing that some people are coming to my domain/s and some people are clicking on adverts there. So it's looking OK and a bit different to three days ago when I only saw red fonts: 16 February: Word Domination by Adsense Thwarted

My stats go up and down like a roller coaster. I've done quite well though since the first of this year.

Mine used to go up, up, up.... then, at a really badly timed moment it nosedived - and I've spent the last 2.5 years saying I should get round to sorting it all out again, but it takes longer to go over an old domain than it does to set it up in the first place, so it kept getting put to the back of my mind again.

I look at the absolute earnings every day. I am glad to see that Webanswers is good for Adsense earnings.

Very time consuming, I've already put 5 hours in on my own website this morning - and had 0 visitors as I need to get the content in place before I start marketing it.

I looked at Webanswers, at one point it was considered risky to your Adsense account as there were some questionable posts on there. I also found no questions about things I knew about - a lot of it was US based. So I've not ever done anything with it.

Cool, that's good news. The longest journey starts with a single step, doesn't it? I will get around to awakening my blog soon, as I have enough posts in draft to be able to put something worth reading up, at least, even if the adverts aren't quite there yet. By the time they are, hopefully I will have found a few new readers.

I've been writing full-time on one of my unused domains and, not surprisingly, there's been 0 visitors to it. By the end of next week I'll be able to start promoting it a little. It's quite difficult to write as it's based on stuff/notes/research I've been carrying out for the last 7 years or so and it's a bit all over the place really, so I decided to start writing up the stuff from just 3 months ago, so I have a chance of catching up so I can start posting "live" daily.

Oh yes, AdSense kills me with their $100 minimum payout threshold (and the OPTION to set it HIGHER!). Apparently they think everybody is a massive corporation with unlimited promotional resources. I know the heartbreak of the Dreaded Red Font, too!