My Favorite Breakfast Cereal Is One I Make Myself 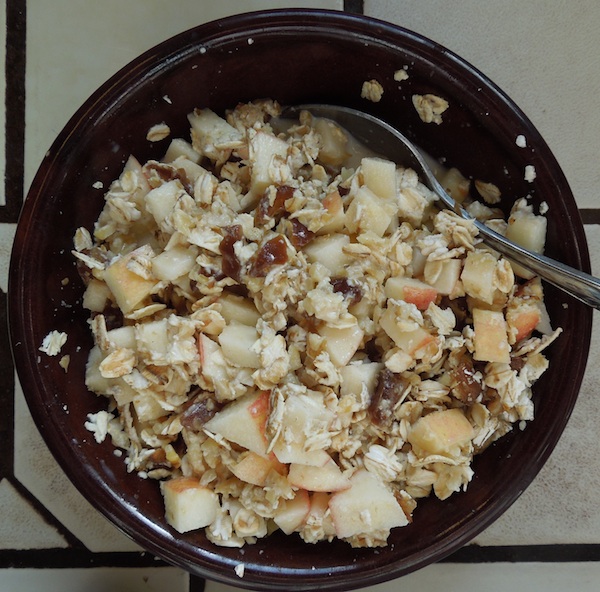 The weather is warming up so this morning I made and ate my favorite breakfast cereal. It has everything I like in it, and it costs much less than buying something similar at the store that isn’t nearly as healthy. This cereal is not always the same. It depends on what ingredients I have handy. Sometimes I use other cereals as a base.

This morning I had some leftover frosted mini-wheats that needed to be used. I broke them into smaller pieces. Then I ground about a 1/4 cups of walnuts to put on top and about 1/3 cup of plain, uncooked oats. To top it off I washed about 1/3 cup of blueberries I had on hand. Then I mixed and topped it with milk.

Blueberries are an important part of my breakfast cereal recipe, but they aren’t always in season. When they aren’t, I use frozen or dried ones. Costco carries some very good dried ones, but they do have added sugar. Other kinds of berries will also work. This morning I got my sugar from the frosting on the mini-wheats.

I can’t remember when I began to experiment with mixing cereals. I know I was at least fifty. One day I just tried mixing two dry cereals we had in the house, and I thought they were better mixed together than eaten separately. I often added sliced bananas, as many others do.

A few years later my husband went to a doctor for diet advice. The doctor told him he would start losing weight if he had about 1/4 cup orange juice over 2/3 cups dry, raw oatmeal. I couldn’t imagine anyone eating uncooked oats. But Kosta said it wasn’t bad. I couldn’t imagine eating cereal without milk. So one day I got brave and mixed some oats with chopped dates and chopped nuts, and I poured milk over all. It was very good.

Kosta saw me adding the nuts and dates, and he wanted to try that, too. Then we started adding chopped apple and some blueberries. The cereal got better and better, and we had to start using bigger bowls. He still pours orange juice over it, and I still use milk. Any kind of milk will do. I am not supposed to drink cow’s milk anymore, so I use goat’s milk.

Although this began because my husband wanted to lose weight, I’m afraid once we started adding dates, nuts and sweetened dried fruits, this cereal no longer qualified as a diet food. It is nutritious, though, full of fiber, and filling. It will hold you until lunch time with no snacking.

I hope I’ve given you some ideas on how to make your breakfast cereal as tasty as an expensive granola you buy at the store, without the added sugar and fat a baked granola has. Experiment with adding various kinds of nuts and seeds and fruits to a cereal you already have on hand – even if it’s just plain oats. Be creative and let your imagination run wild. You’ll be glad you did.

Pictures and content are original and may not be used without permission, B. Radisavljevic, Copyright 201 5 , All Rights Reserved

One would imagine cereal without milk would taste bland but not with all that you have put in. I was sick of oats cooked in milk and so I baked some goodies with oats as the main ingredient. I am fed up of that too now!

I do't bake much at all anymore, since we aren't supposed to eat all those baked goodies. I can make this cereal with different ingredients anytime I feel like changing them.

I like muslei (sp). I read somewhere to mix a ratio of 2 parts of this cereal blend with one part plain yogurt and put it in the refrigerator over night. I really like it. Sounds like you've dreamed up your own.

It sounds very good but I can not see it with orange juice over it. Maybe in a glass to drink with it.

barbrad My breakfast is very similar to yours, cereal (all-bran type almost exclusively) with some blueberries and strawberries and Almond Milk are part of my daily breakfast routine.

Mine is much cheaper and i know exactly what's in it.

That's why I use milk. It's hubby that uses the juice.

That also sounds healthy, but I wouldn't trust all the ingredients in the bran cereal. I forgot to mention I sometimes add agave syrup if I don't use dates on a given day.

I've offered to make homemade granola for my boyfriend, but he has repeatedly declined.

I do cook oat groats periodically for myself. My boyfriend makes a face and won't touch it, since he doesn't like cooked oats.

Absolutely I am aware of that. One has to choose those products that have the least amount of artificial ingredients, if possible.

Do you just make individual portions each time? Since it's probably easier to just make what you'll eat that day.

I'll bet you're healthier than he is.

Yes. Since I normally use fresh fruit, I only make enough for one meal.

The stuff he buys isn't unhealthy. It would be healthier (and more cost effective), though, if he did like cooked oats. Then, he could enjoy the oat groats that I buy in bulk.

We eat a rather healthy diet overall-- organic, heavily local, vegetarian. Even the "junk food" we sometimes buy really isn't "junk." I got him away from being able to stomach junk.