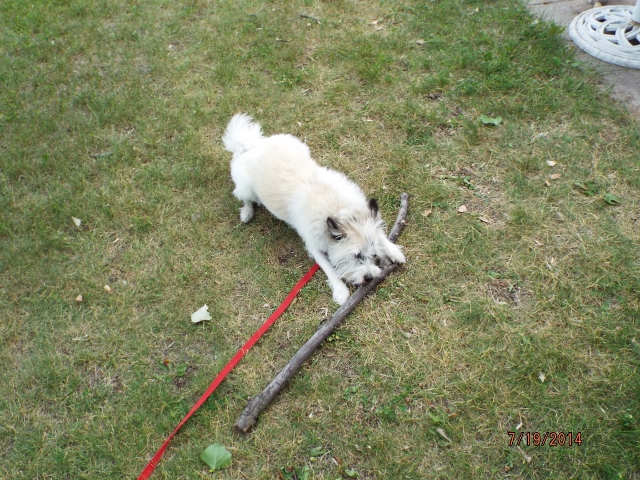 As I introduced Allie in a previous post I figured I should also introduce Morgan. Morgan is our dog that we believe is a poodle/terrier mix, a terrypoo according to some, though we are not 100% sure that this is what she is. We adopted Morgan from our local animal shelter after she was born in foster care for them. They were told that the mom was a poodle/terrier mix but we have no idea what the dad was, so we just go with poodle/terrier. Co-workers of my husband's were actually the ones fostering Morgan and the rest so we were able to learn a fair amount about her from them. One interesting thing is that Morgan is the only one of the seven puppies to have ears that actually stand up, they rest all have floppy ears.

Morgan absolutely loves cats, the foster home had at least 4 or 5 cats while she was there, and for a while she even played like a cat. Unfortunately for Morgan Allie seems to refuse to like her. Morgan has been with us for about two and a half years and Allie still does not like her. We have given up hope that Allie will ever like, or even be indifferent towards Morgan. Morgan still tries daily but has learned to stay far enough away from Allie.

Morgan's favorite thing to do outside is to chew on sticks, as you can see in the photo for this post. That stick was a little large but Morgan still loved it and spent a long time chewing on it. She also loves to race around the house and go for walks. One odd thing about Morgan is that she loves her vegetables. She will gobble up carrots as fast as you can give them to her. She also will steal pea pods right off of the plant. We learned that the hard way trying to grow peas in our garden and finding none growing above the fence line. At first we thought it was the rabbits but then we caught Morgan stealing them. Now we make sure that anything grown by the fence (it's just a few feet tall to keep the rabbits out of the garden) are small plants so that Morgan won't steal any of it.

Image Credit » Photo by me 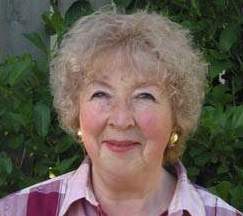 I had a cat the seemed like she was not going to accept the adopted one to be her companion cat. After a lot of hissing they became best friends. Give your Alli some time and your dog and cat might be buddies too. I liked you animal story.

Well, I'm glad to meet Morgan. What you do is commendable, adopting pets from animal shelters. I'm supporting the local animal shelter here as well but I really can't adopt any pets so instead I send some financial assistance or spend some time helping around in the shelter doing chores. 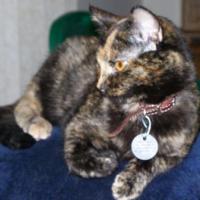 Allie has seemed like she wouldn't accept the foster cats we had when we did that but she would start to warm up towards them after a few weeks, but it's been about two years with Morgan and her attitude hasn't changed at all. We doubt it ever will at this point.

There's plenty of people that do that around here too. The shelter we have gone through regularly has volunteers come and give the cats attention or take the dogs for walks. They like any kind of help, especially since our local shelter gets no outside funding. There's is all through adoption fees and donations to them.

If cats and dogs grow together they get to love each other. I has happened here too.